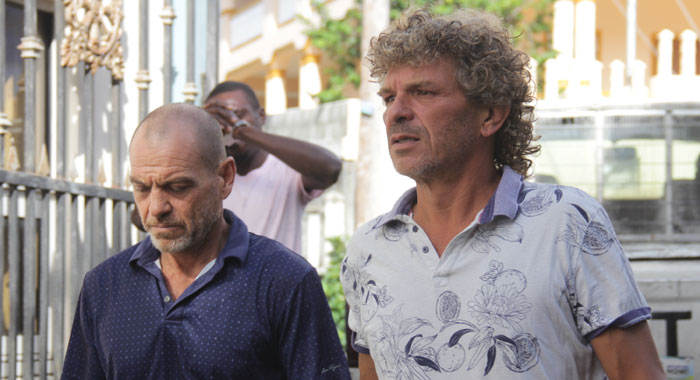 The two Frenchmen, Frenchmen fined for ganja, arrive at the Serious Offences Court in Kingstown on Monday for sentencing. (iWN photo)

Two Frenchmen were, on Monday, fined EC$4,250 on marijuana and ammunition possession and immigration charges.

Frederic Blanc, 52, of France, and Gilles Monfeugas, 56, of Martinique, appeared before the Kingstown Magistrate Court on Dec. 24 — Christmas Eve — where they pleaded guilty to charges that on Dec. 23, at Petit Bordel, they had in their possession 309 grams (10.9 ounces) of cannabis, and four rounds of 12-gauge ammunition, without a licence.

The men also pleaded guilty to three immigration charges, namely, that on Dec. 23, at Petit Bordel, they entered St. Vincent and the Grenadines other than at a port of entry; that they entered the state by boat and disembarked without the consent of an immigration officer, and that they knowingly and wilfully allowed themselves to be landed as prohibited immigrants.

Senior Magistrate Rickie Burnett adjourned and transferred the matter to the Serious Offences Court for facts and sentencing.

However, that court was not sitting and the men were remanded into custody until Monday, Dec. 30, when they appeared before the Chief Magistrate Rechanne Browne.

The court heard that on Dec. 23, about 8 a.m., a party of Rapid Response Unit and Coast Guard personnel aboard Cast Guard Vessel SVG 02, acting on information, went in search of a yacht in respect of controlled drug and unlicensed firearms and ammunition.

The party, which was headed by Leading Seaman Morris, met off the Petit Bordel shoreline a white, orange and black yacht, matching their information.

They met Blanc inside the yacht and the police informed him of their duties and he consented to a search.

Inside the cabin of the yacht, Police Constable 73 Khafra Jack found two brown taped packages containing plant-like material resembling that of cannabis behind the headrest of the seat.

Blanc, on being cautioned, replied, “Officer, the packages are mine.”

Monfeugas, the captain of the vessel, who was ashore came aboard and when questioned, replied, “Officer, I’m guilty for everything.”

During a more detailed search, the officers found on the top shelf of the cabin a transparent container containing four rounds of 12-gauge ammunition.

Blanc replied, “Officer, I don’t know anything about those.

Monfeugas said, “Officer, I don’t know they were there. Is what I use home for hunting.”

When questioned further, the men told police that they did not clear with immigration.

The men were arrested and charged and later handed over to immigration officials.

In mitigation, defence counsel Grant Connell told the court that his clients had cooperated with the police and had expressed remorse for their actions.

He said that they had their passports and documents prepared but had not cleared with immigration officials immediately on arriving in SVG.

Connell said it was not Blanc’s first trip to SVG and on the other occasion he had cleared with immigration officials.

The lawyer said that on this trip, Blanc had come to see his girlfriend and some of his friends came aboard the yacht and brought the marijuana “for the enjoyment of the visitors.

“It wasn’t for sale,” the lawyer said.

He further said that Blanc lived in France where he had a licence to hunt and when he moved to Martinique, he loaded all his possessions onto the yacht, where he lives, not realising the ammunition was there.

The lawyer said that, at the arraignment, he and the prosecutor had discussed the case but after both men pleaded guilty, the prosecutor rose and asked for an adjournment to consult Interpol to see if any of the men had a criminal record elsewhere.

The lawyer said that the senior magistrate then adjourned and transferred the case to the Serious Offences Court, which was not sitting, resulting in the men spending almost a week in jail.

The chief magistrate said that a custodial sentence was inappropriate in the circumstances and ordered the men to pay EC$300 forthwith for the marijuana or spend one month in jail.

They were to pay forthwith EC$1,850 on the ammunition charge, with the fine equally divided between. The alternative was two months in jail.

On each of the immigration charges, the men were fined EC$300 and EC$400 with the higher amount payable by the captain, with an alternative sentence of one month in prions on each charge.

The men paid the fines.