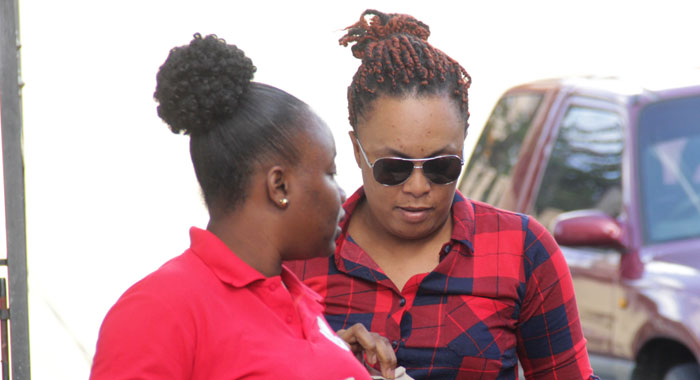 Theft and corruption accused, Mitra-Ann Prescott, right, interacts with a detective on their arrival at the Serious Offences Court on Monday. (iWN photo)

A junior clerk attached to Police Headquarters was on Monday brought before the Serious Offences Court charge with theft of EC$154,300.

Mitra-Ann Prescott, of Harmony Hall, was also charged with three counts of corruption in connection with the alleged theft.

Related to that allegation, she is charged with one count of corruption, namely, that between those same dates, “being employed in the Public Service and being charged with the performance of her duty as a junior clerk attached to the Royal St. Vincent and the Grenadines Police Force by virtue of such employment, corruptly agreed to received the sum of EC$6,500, the property of the Government of St. Vincent and the Grenadines on account of invoices in the name of Garys Gareth Sayers and Gareth Renson Sayers processed by her in the discharge of her duties of her office”.

The corruption charge related to that count of theft alleges that Prescott processed invoices in the amount of EC$60,400 in the names of Garys Gareth Sayers and Gareth Ranson Sayers.

The corruption charge alleges that Prescott processed invoices in the sum of EC$60,400 in the names of Gary Garage, Gareth Sayers and Gareth Renson Sayers.

Prescott pleaded not guilty to all charges, which were laid summarily.

iWitness News understands that the charges stem from the alleged processing of fraudulent claims related to the alleged supply of tyres for police vehicles.

Prescott was suspended from work several weeks ago as police and auditing officials launched an investigation.

Prosecutor Crown Counsel Renee Simmons told the court that the Crown had no objection to Prescott’s bail, but was requesting sufficient surety, reporting conditions and that the accused woman surrender her travel documents.

The prosecutor also asked that the matter be transferred from the Serious Offences Court to either the Kingstown or Calliaqua Magistrate’s Court.

Chief Magistrate Rechanne Browne, who presided, said that she knows Prescott, and, therefore, would not be able to hear the case.

The chief magistrate granted Prescott bail in the sum of EC$150,000 with one surety and ordered her to report to the Calliaqua Police Station on Mondays between 6 a.m. and 6 p.m.

The accused woman was further ordered to surrender her travel documents, and to seek the permission of the court to leave the state.

The court also ordered that notices be placed at ports of exit and entry, preventing Prescott from leaving the jurisdiction.

The case was adjourned and transferred to the Kingstown Magistrate’s Court for hearing on Feb. 25, 2020.