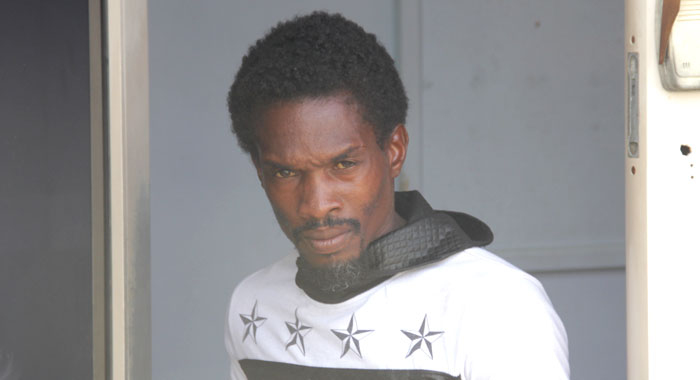 Kerwin Franklyn leaves the Kingstown Magistrate’s Court , on Thursday, after being placed on a bond and ordered to undergo counselling. (iWN photo)

The recently announced guidelines that courts must follow when sentencing offenders may have shielded an abusive New Montrose man from immediate prison time on Thursday.

Kerwin Franklyn, a 34-year-old minibus conductor, appeared before Senior Magistrate Rickie Burnett at the Kingstown Magistrate’s Court, where he pleaded guilty to a charge that on Wednesday — New Year’s Day — he had in his possession an offensive weapon, to wit a cutlass.

According to the facts read by Corporal of Police David Wright, Franklyn had also threatened to use the weapon on his common-law wife, Sophia Pollard, of the same address.

The incident occurred just three years after Franklyn was fined for striking Pollard with a cutlass on both of her arms.

The court heard that the duo had been together for nine years and the union has produced two children — aged 7 and 3.

About 5:30 p.m. on New Year’s Day, Pollard went to visit her niece, who lives nearby.

About 7 p.m., Franklyn went to Pollard niece’s home and asked Pollard if the children had eaten for the day and she told him yes.

Pollard’s niece expressed disgust at the way that Franklyn had spoken to her aunt, saying it was disrespectful.

Franklyn became angry, went to the roadside and began arguing then left and went home, returning with a cutlass.

He resumed arguing, gesticulating with the weapon in his hand.

Franklyn then told Pollard that she could not return to their home to sleep or he would chop her up.

Pollard reported the incident to the police, resulting in Franklyn being arrested and charged.

After hearing the facts, the senior magistrate asked Franklyn about the length of this relationship with Pollard and their children’s ages.

He then asked Franklyn how long he had been abusing Pollard and the defendant said it began last September.

Burnett them pointed out the 2016 conviction and told Franklyn that he was speaking as if he was proud of his actions.

During the interaction, Franklyn said that Pollard is unemployed, and Burnett averred that that is the problem, adding that when women are jobless and dependant on men, they have a tendency to treat the women with disrespect.

“When are we doing to see a change of that?” Burnett asked rhetorically. “I don’t know. And in the year 2020, it seems we are starting the cycle again.”

Franklyn admitted that he was wrong in his action.”

“So after you leave court today, if you go home, both of you are going to sleep tonight?” he asked Franklyn, who responded, “Yes, sir.”

The magistrate then asked Prosecutor Constable Corlene Samuel to address the court but not make a recommendation on sentencing.

Samuel noted that the court had only heard Franklyn’s side, adding that she would like to hear what the complainant has to say.

The senior magistrate then said that he had said last year that complainants should be told to come to court when their matters are up for hearing.

Burnett said that nothing happened when he spoke on the issue. “I am only going to do my job,” the senior magistrate said.

Samuel said she understands the senior magistrate’s position, but said she was going to make an application for Pollard to appear, so the court could hear her.

The matter was stood down until Pollard arrived.

When Pollard arrived, she told the court that she and Franklyn’s relationship ended with the New Year incident.

The woman said she had been telling Franklyn for some time to leave the home and that they can’t make it.

She said that she believes that Franklyn would continue with his abusive ways.

The magistrate noted that the couple had a child after the 2016 abuse and asked if it was because of love or circumstances.

Pollard said circumstances. She said that Franklyn maintains the children but not as he should, adding that if Franklyn were sent to prison, her church will help her.

‘That mean she ain’t love me, right?’

As the hearing moved to the sentencing phase, the senior magistrate noted that Franklyn’s crime was not covered by the guidelines but said he has to have the guidelines in mind.

He said that based on his understanding of the guidelines, Franklyn’s crime did not fall in the custodial category.

The prosecutor admitted that it did not. The magistrate noted that he had last week raised a question about the guidelines.

Samuel said that she, in turn, was awaiting a response regarding whether, under the guidelines, the aggravating features in a case would push a sentence from non-custodial to custodial.

“The guidelines are relatively new and–” Samuel said without finishing the thought, later adding that if a crime is not covered under the guidelines, the court should handle it in the way it always had.

The senior magistrate, however, said the available guideline must be in his head, adding, “When I sentence him, if he appeals–”

In his interaction with the court Franklyn said he had been to prison before but could not remember when.

“Why do you behave so with the mother of your children?” the senior magistrate asked Franklyn.

Franklyn said that things in the home frustrate him at times.

However, the senior magistrate told him that beating up on his woman is not the way of dealing with frustration.

Burnett told Franklyn if he is with a woman and they can’t get along he should leave her.

He further told the defendant that the complainant was essentially saying that she wants him to go to jail.

“If she is saying I should go to jail, what become ah my youth them. That mean she ain’t love me, right?” Franklyn said.

Burnett told Franklyn only the court could determine if he is sent to jail.

“I will stop. This is 2020,” Franklyn said of his abusive behaviour.

The senior magistrate then told the man what he will give him one last chance to stay out of prison, adding, “I want you to change.”

“Thank you, your honour. This is 2020. I can change. Anybody can change,” Franklyn further said, even as the complainant maintained that he would not.

Franklyn then told the court that he thinks they need counselling.

Pollard agreed but said she does not want to be involved in any counselling with him because the relationship is over.

“He needs a counsellor. He needs psychiatric evaluation because I think he is crazy,” she told the court.

In the end, the court referred the case to Social Protection and bonded Franklyn to keep the peace for one year. If he breaks the bond, he must pay the court EC$1,500 forthwith or go to prison for six months.

The court further ordered Franklyn to undergo counselling for one year with the Ministry of Social Development.

The ministry is to submit a report to the court after six months and at the end of the year.

If Franklyn fails to attend counselling, he will go to prison for three months.

Burnett told Pollard that he was happy that her church is helping her.

He said he spends more time when handling such cases because he has to deal with the real issue in the case, which he said was that Franklyn doesn’t know how to manage his home.