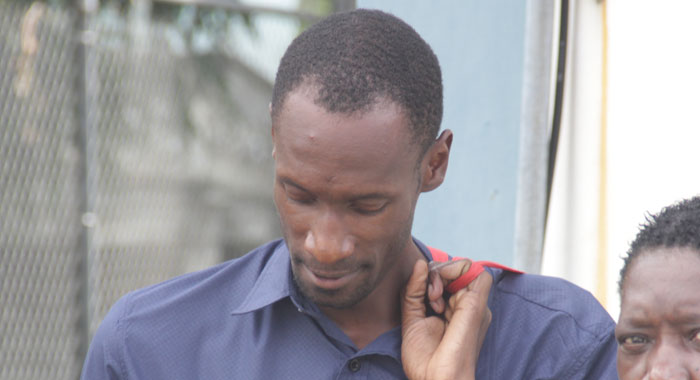 Able Body Seaman 390 Andre Samuel holds down his head outside the Serious Offences Court, in Kingstown, after making bail on a sex charge on Dec. 19, 2019. (iWN photo)

The Royal St. Vincent and the Grenadines Police Force (RSVGPF) has rescinded the promotion of a police officer who has been suspended from duty pending the outcome of a sex charge.

Some members of the public expressed shock and outrage at the promotion of Coast Guard officer 390 Andre Samuel from able body seaman (AB) to leading seaman (LS).

Samuel was among officers whose promotions were announced on Thursday.

However, the Police Public Relations Department said in a statement on Saturday that the promotion had been rescinded.

The police offered no reason for the rescission, but AB 810 Lewis has replaced the said Samuel.

The girl is said to have been 14 at the time of the alleged assault.

He was granted EC$5,000 bail with one surety and was ordered to have no contact with the virtual complainant and surrender all travel documents.

The court further ordered that notices be placed at ports of entry and exit, preventing Samuel from leaving the country.

Once charged with a crime, a public service worker is automatically suspended from duty and receives only half pay until their matter is disposed of.

On Thursday, the Police Public Relations Department announced the promotion of 70 officers, including the promotion, by the Police Service Commission, of Superintendent of Police Leonard Fergus to act as an assistant commissioner of police.

However, iWitness News saw an internal communiqué that listed all the officers promoted, and Samuel was among them.

Thursday’s press statement said that, at meeting with the general body that day, the police chief congratulated all of the officers who were promoted to various ranks.

“He emphasised that promotion brings news responsibilities and urged the newly promoted officers to take those responsibilities seriously in the performance of their duties. He also thanked all the members of the organization for their hard work and dedication to duty during 2019,” the press statement said.

However, on Saturday, the police issued a press statement announcing the promotion of 17 more police and Coast Guard officers.

The release also announced the rescission of Samuel’s promotion.

In 2019, three police officers, including Samuel, were charged with sex crimes and are all awaiting their day in court.