Lionfish — a threat to our marine ecosystem 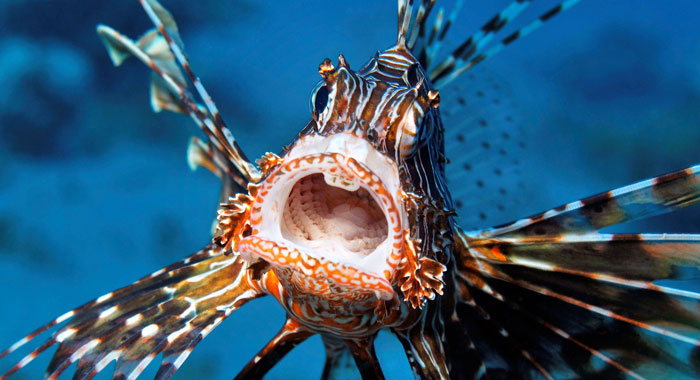 The ocean is rich with biodiversity that supports a livelihood for fishermen. Ten percent of the world’s population depends on fisheries for livelihoods, and 4.3 billion people are reliant on fish for 15% of their animal protein. In the Caribbean, the ocean is under threat from pollution, overfishing, climate change, and the armour of the ocean, the lionfish.

The lionfish can be deemed the armour of the ocean because it has 18 venomous spines that are used defensively — the only known predators for the lionfish are humans. It is an invasive species that has the potential to wreak havoc on the ocean. Scientists believe that the source of the invasion came from lionfish being removed from home aquariums and disposed of in the Atlantic Ocean, which have caused it to invade and multiply rapidly in the Caribbean.

The National Oceanic and Atmospheric Administration (NOAA) says that lionfish have the potential to harm reef ecosystems because it is a top predator that competes for food and space with overfished native stocks such as snapper and grouper. NOAA says that scientists fear that lionfish will also kill off helpful species such as algae-eating parrotfish, allowing seaweeds to overtake reefs.

Parrotfish are imperative for the formation of white sandy beaches. Research shows that parrotfish are responsible for about 70% of sand on tropical beaches. Parrotfish bite and scrape algae off of rocks and dead corals with their parrot-like beaks, grind up the inedible calcium carbonate reef material (made mostly of coral skeletons) in their guts, and excrete it as sand.

A mature female lionfish releases roughly two million eggs a year. The lionfish’s egg sac has a chemical deterrent that prevents other fish from eating it. The egg sacs are distributed via the Lionfish can reach as far as 305 meters (1,000 feet) underwater. They reach adult size when they are about two years old. Female lionfish starts to become sexually mature and lay eggs when they reach 7-8 inches in length or when they are about 1 year old.

This is why the lionfish is a very dangerous fish because it can reduce the parrotfish population and other fish, which can cause a crisis in the ocean hence in St. Vincent and the Grenadines (SVG) we should demand more lionfish when we go at the fish market. This would encourage our fisher folks to go the extra mile to catch more of lionfish to reduce their population. When we celebrate Fisherman’s Day in SVG, we can also have a special award for persons who catch the most lionfish and the private sector can get on board to help to award prizes to our fisherfolk. Lionfish are venomous and not poisonous, which makes it safe for consumption once the venomous spines are removed. This video shows how to remove the venomous spines:

The ball is in our court to reduce the lionfish population, let us start a campaign with the theme, “Lionfish, we need more of you in our plate”.

3 replies on “Lionfish — a threat to our marine ecosystem”