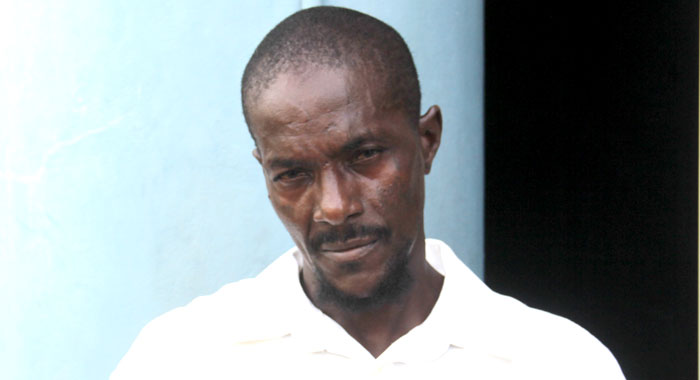 A man was tried, on Wednesday, at the Kingstown Magistrate’s Court on a charge of giving contradictory evidence in a court proceeding.

Zarri “Shines” Layne, 39, of Sion Hill, was charged that on July 2, 2018, at Kingstown, being a witness in judicial proceedings before the High Court, he made a statement on oath, to wit, “me na see e man face, me na see him”, which contradicts in a material detail, a previous statement made on oath before the Serious Offences Court, to wit “at the shop I was seeing his entire body everything, yes I saw him with my own eyes” with intent to deceive.

Layne, who was represented by counsel Grant Connell at the trial, had initially pleaded guilty to the offence when he was arraigned at the Kingstown Magistrate’s Court on July 4, 2018.

However, the man who faces up to seven years in prison, changed his plea to not guilty ahead of his sentencing.

Connell, who was not Layne’s lawyer at his arraignment, had intervened on the man’s behalf in July 2018.

Nelson told the court he was the prosecutor in the case, the Queen v Emron Jones, which was tried at the High Court in July 2018.

Layne was a friend of the virtual complainant, Enrico Jack, and was present during an incident in which Jones shot Jack sometime in 2013 at a shop in Murray’s Village, Nelson told the court.

Layne was a witness in the case and he and Nelson had occasion to interact before the trial.

He said Layne gave the police a statement saying that he had seen the whole body of the shooter and that it was Emron Jones.

“He pointed him out,” Nelson told the court.

He said that the matter came up for trial at the High Court on July 2, 2018, Jones having been committed to stand trial after a preliminary inquiry at the Serious Offences Court, in which Layne testified.

Nelson said that prior to Layne giving evidence at the High Court, he told Layne that he expected him to tell the truth.

The crown counsel said that prior to Layne giving evidence, he had seen him in close proximity to Sergeant Rudolph Bartholomew of the Criminal Record Office (CRO).

Bartholomew appeared to be reading from a copy of Layne’s deposition and his original statement.

Nelson said the procedure is that prior to a witness giving evidence, the CRO officers would refresh their memory by allowing them to read their previous statements.

Nelson said he told Layne that he expected him to tell the truth because he was aware that Layne was reluctant to give evidence in the matter.

Nelson said he was also aware that Jack, subsequent to being shot, had learnt that he and Jones, the assailant, are related and wanted to settle the matter out of court.

He said that prior to July 2, 2018, the matter had been called but the trial did not commence.

On that occasion, Nelson said, he and Layne were outside the High Court as was Jack and Jack’s father. Nelson recalled seeing Bartholomew and Police Constable Dasent and other officers present.

He said he heard Jack’s father tell him in the presence of the aforementioned persons, “You and Emron related and don’t give no evidence in this matter. This is a family matter.”

The Crown counsel said he ordered Bartholomew to arrest Jack’s father for interfering with a witness and the man was so arrested and taken to the Central Police Station.

Nelson did not indicate whether the arrested man was later charged.

“I say all this to say I know they were reluctant to give evidence and that is why I told him to … tell the truth,” Nelson told the court.

Nelson said that when Layne was called to testify, he was duly sworn, and did swear to tell the truth.

Nelson said he asked Layne a series of questions, including whether he had seen the person who shot Jones.

“He told me he did not see the person’s face,” Nelson said.

Nelson said he asked Layne the question several times, including during re-examination and Layne maintained that he did not see the shooter’s face.

Nelson said that Layne had never complained to anyone in his presence that he was threatened by anyone to not tell the truth in the matter.

The crown counsel said that in light of Layne’s evidence, which contradicted what he had said at the preliminary inquiry and in his statement, he instructed the CRO officers to arrest Layne.

Jones was convicted of the charges against him.

Police Constable Terry Phillips executed the arrest. He told the court that Layne had told him after the arrest to give him another chance to go back into the court and speak the truth.

Layne further told the officer that someone had threatened him.

The alleged threat was later investigated.

In addition to Nelson, Bartholomew and Phillips, Kenroy Questelles –who Layne had alleged had threatened him in connection with the case — testified for the Crown.

Bartholomew told the court that Layne had arrived at the High Court around 8:40 on the morning of the trial, saying that the virtual complainant would not attend court.

The officer said he assured Layne that Jack would attend.

Layne said he had to take something to his girlfriend at the ferry terminal, Bartholomew told the court.

When Layne returned, Bartholomew refreshed Layne’s memory from the deposition.

Bartholomew said that Layne told him: “Alyo wah me give evidence and Enrico who get the shot ain’t coming court.”

Layne then said, “I know what to do when I get in the box.”

Bartholomew said he told Layne that he must speak the truth as failing to do so has consequences.

Layne responded: “I would just know what to do when I get in there.”

Questelles told the court that Layne had called him as he was walking outside the court and had complained that the virtual complainant was not coming to testify.

Layne took the stand in his defence and he told the court that the day before testifying in the High Court, he had told Bartholomew that he had been threatened to not give evidence but he still decided to show up at the trial.

He said that when Nelson was questioning him he was “so frighten for my life because how I done get threaten if I say anything to make my friend go to jail, I would lose my life”.

He said that notwithstanding the threat, he chose to testify in the matter, because a bailiff came and said he would have been arrested if he did not attend court.

Layne said that before he went to court, a man had had already “put gun to my head and squeeze the trigger and nothing buss…

“I had to say that because is just my life, my honour,” Layne said.

He said that the police did not tell him about the witness special measures that would have allowed him to testify remotely or about witness protection.

“Ah love me life,” Layne said. “When ah was in jail, they try to poison me with some Gramoxone in tea.”

Senior Magistrate Rickie Burnett will hand down his verdict on Jan. 24.