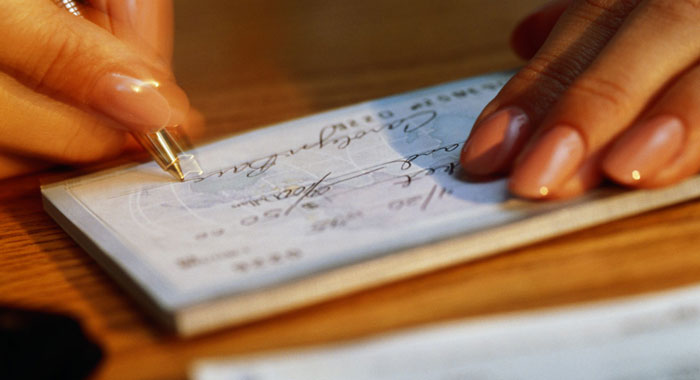 An internet image of a chequebook.

More inconsistencies in the chequebooks of Star Garage emerged last Tuesday as the trial of Nigerian-Vincentian Eunice Dowers on 52 fraud charges continued.

This section of the cross examination focused on two chequebooks that have been tendered into evidence.

Da Silva said each cheque has a duplicate and the chequebook does not need carbon paper to produce that duplicate.

He agreed, as the lawyer had demonstrated, that it is possible to prevent the duplication by placing the cardboard found at the back of the chequebook, and meant to prevent unintentional copying, between the cheque leaf and the duplicate.

The general manager also agreed that another way would be to tear out the cheque then fill it out.

Da Silva said he was not aware that there were blank duplicates in the chequebook.

“We don’t issue blank cheques. That’s not the company’s policy,” he told the court.

Da Silva said one of the cheques, which was cancelled, had been made out to the accountant general.

However, on the stub was written, “Payment to Bertille Da Silva, payment for brother at airport,” Da Silva said, adding, “I don’t understand.”

The lawyer said that was the point and asked why the difference between the information on the stub and on the duplicate.

“Who write that?” Joshua asked, in reference to the information on the stub.

On the other cheque, there was no original cheque clipped back onto the stub, Da Silva confirmed.

He said there was no payee assigned to the cheque.

Da Silva said he would have to ask the company’s accounts department if Star Garage was audited for 2018.

A third cheque, which was marked “identified by Joshua Da Silva” — presumably during the police investigation — was made out to the accountant general.

Asked to look at a fourth cheque, said he remembered that one.

The lawyer noted that a note on the cheque said that Da Silva had identified it.

“I am sure you do,” the lawyer retorted, adding that the witness’ memory will be jogged by what is written in the stub.

Da Silva said that on the stub was written “accountant general for parts at AIA” and $112.95.

“So, Mr. Da Silva, at this point, it would be fair to conclude that at Star Garage, whoever writes in the stub, there are several examples of it being at variance with that which is on the cheque?”  Connell asked.

Da Silva said he could not say what had happened “here”.

Connell said that the witness had spoken about the company being so meticulous.

He asked Da Silva if Star Garage’s accountant had picked up the inconsistencies.

Da Silva said he and the accountant picked this up at the beginning of 2019 when they were reviewing all the cheques.

“She was buying stuff for herself and putting it on Star Garage cheque,” he said of Dowers.

Da Silva said that if, for example, the company was supposed to pay $890 and Dowers was to pay $2,200 she would combine them and put everything as one.

“That’s what she was doing.”

Connell asked the manager if he even verified with Bertille “Silky” Da Silva, his managing director what courtesies Silky extended to Dowers.

Joshua said that Silky never extended any courtesies to Dowers.

“That wasn’t part of her job description,” he said.

Joshua said he did not know about Silky giving Dowers money.

The lawyer then showed Joshua a cheque that was made out to Courts Ltd.

Joshua said he did not know the handwriting of the person who had written in “Court Ltd.”

But he said he remembered the transactions.

Joshua said the cheque was in the sum of $1,500 and “would have been cashed”.

Asked where the proof was, Joshua said he would have to go and look.

He, however, said he did not fill in the cheque.

He said it was not his handwriting on the stub, which said, “For car radio receiver to Star Garage Ltd.”

He said it was either one of the other secretaries or Dowers who filled in the cheque.

Dowers is accused of using, without permission, the credit card belonging to Silky when she worked at Star Garage as his secretary and later as the company’s customs broker from April 2018 to February 2019.

The previous week, Silky reasoned that some of the blank duplicates could be because there was no carbon paper in the chequebook when the cheque was made out.

Her lawyer is arguing that Dowers and Silky were in an intimate relationship and he gave her permission to use the card.

Connell has also argued that the other staff members, including Joshua, who had access to the card, also abused it.

Silky has denied having an intimate relationship with Dowers or giving her permission to use the card.

Joshua has denied unauthorised use of the card or that he turned Dowers from Silky’s “lover to Lucifer in his eyes” because she discovered his abuse of the card, as Connell had argued.

The trial continued on Feb. 17 at the Serious Offences Court in Kingstown.