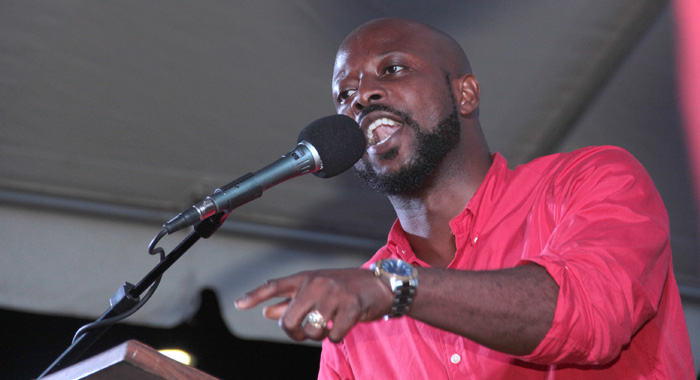 The ruling Unity Labour Party’s caretaker for North Leeward has suggested that he will not contest another election if he is not voted into office this year.

James was defeated in 2015, at his first outing at the polls, when the opposition New Democratic Party’s (NDP) Roland “Patel” Matthews was returned for a second five-term by 12 votes.

James told the ULP constituency Conference in Chateaubelair on Sunday:

He told the gathering:

“We cannot not go out to vote and we continue with the status quo, the same old, no serious representation from the other side, but in 2025, a new Unity Labour Party candidate emerge but the question is, would he have the vision, would he have the ability to want to bring the resources up to North Leeward and in so doing, you may have a candidate who can win, but North Leeward loses.”

James, a lawyer and government senator, said he was making the comments “with a level of deep and profoundness in my heart”.

“And I want to see North Leeward advance,” he said.

“Not the Unity Labour party by itself, but North Leeward as a whole,” he said that people have to work together, no matter their political affiliation, hence the theme for the event – “Working Together for a Better North Leeward”.

“We are not leaving anyone behind. Whether you are a comrade or you are not a comrade, you have to rally and support a candidate who means business, a candidate and a party who is serious about your development and your advancement and serious about the children and the future of your children in this constituency,” James said.

He said this election is by far the most important in the district “because you have in me a candidate who is willing, ready, and committed to serve the people.

“But then you have, Comrades, North Leeward has seen a dark shadow over a decade of no real representation from an MP who sits on the opposition benches in Parliament.”

James said that over that decade there has been no effort from the current MP to advance the causes of constituents “whether voluntary or otherwise”.

He said that some persons would say that the MP is not in government.

“I will tell you of a programme called Access to College Education. Many of the young persons in North Leeward know about it. For six years, I have teamed up with Generation Next, provided funding and assistance and solicited funding to send over 100 students across St. Vincent but more particularly from North Leeward off to college. We have assisted them with bursaries.”

In the earlier stages, the Access to College Education programme received funding from the National Lotteries Authority, a state-owned entity.

James said that every summer his team provides back to school assistance to the most needy.

“You see the commitment and the work. You see the effort that I put in to ensure that your life is comfortable here in North Leeward,” he told the conference.

“It is now your turn to put your faith and you trust in me and the Unity Labour Party to continue the mandate of good governance, to continue delivering to the people of this community and this constituency.

James said he and the ULP are about people.

“And if we can’t advance people, then we should not be involved in politics. That is what I am here to do. Not to advance any personal cause but to advance the cause of the people of North Leeward.”

He said that the ULP holds eight unshakable seats in the 15-member parliament.

The other seven are held by the NDP.

James, however, noted that winning an election is not easy.

“… The road to 2020 is not going to be an easy one in North Leeward. We thought we had it in 2015, but I will tell you, we are leaving no stone unturned in 2020. We are cleaning every single community, we are going and we are looking for votes, we are registering persons and we are going to take North Leeward into the fold of the Unity Labour Party.

“I don’t want you to do it for me. I want you to go out and rally for this political party because it is a party that has a track record of delivering for the people,” he said.

General elections are constitutionally due by March 2021, but Prime Minister Ralph Gonsalves has said that Vincentians will go to the polls by the end of this year.