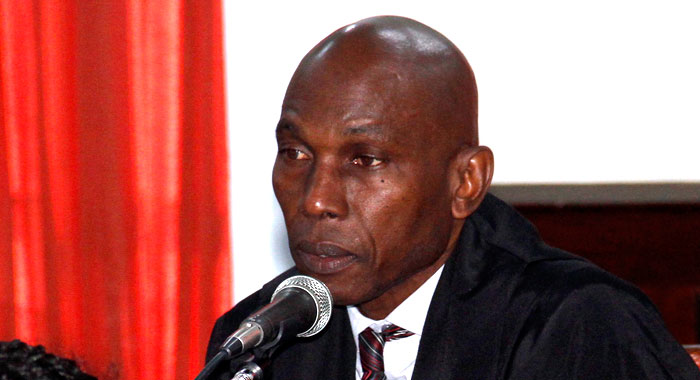 Speaker of the House of Assembly Jomo Thomas, on Wednesday, informed Parliament of his intention to quit the post, something he announced publicly since last October.

“Just to say that my time in his chair is coming to an end. I am not so sure how much — I did say in an October 29th press conference that I would be gone by the first quarter of 2020. We are rapidly approaching that time,” Thomas said during the period reserved for announcements by the speaker.

In his public announcement last year, Thomas, who became speaker in December 2015, also announced that he had resigned as a member of the ruling Unity Labour Party (ULP).

He was the ULP’s candidate for South Leeward in the 2015 general elections and failed in his bid to prevent Nigel “Nature Stephenson”, of the main opposition New Democratic Party (NDP), from securing a second five-year term.

Thomas’ candidacy had come just over two years after he was appointed as ULP senator.

On Wednesday, Thomas told the lawmakers that he enjoyed his tenure as speaker.

“It’s an honourable bunch — sometimes can be quite unruly but I think in the end all of us come here to serve the people of St. Vincent and the Grenadines,” he said.

He said that in the four years one month and 22 days that he has been speaker, “I never came here thinking that I represented anyone or anything but St. Vincent and the Grenadines.

“I tried my best, I made errors, I probably made enemies but, in the end, I think I did what my conscience told me was the right thing to do.

“I want to thank everybody who put up with me and all of my idiosyncrasies and I hope that this august body would grow from strength to strength,” Thomas said.

He, however, gave no indication of when exactly he intends to vacate the post.

Speaking immediately after Thomas — during the period for statements by ministers — Prime Minister Ralph Gonsalves said that whenever Thomas demits office, “we will have to pay the usual respect for someone who has served with us.

“I just want to indicate that. I don’t know what your timetable is but I say that in relation to your own statement in acknowledgement of your contribution,” the prime minister said, adding that he did not rise to make a statement by a minister on the speaker’s announcement.

“I just want to make the comment in the light of your own announcement,” Gonsalves said.

After becoming speaker, Thomas was the subject of some intense criticism by some supporters of the ULP, including on its own radio station.

4 replies on “Speaker tells Parliament of plans to quit”