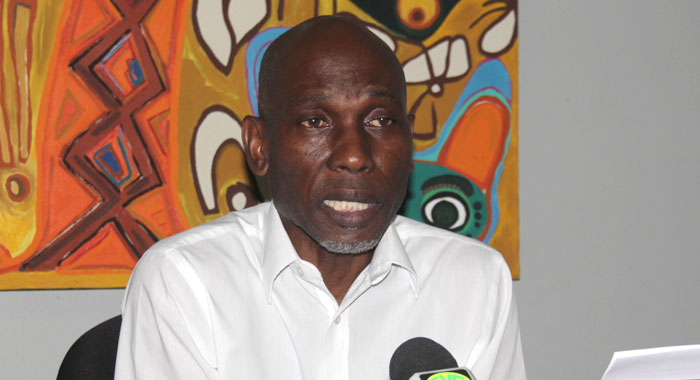 Lawyer and activist Jomo Thomas, on Tuesday, announced that he has resigned as a member of the ruling Unity Labour Party (ULP) and would quit as Speaker of the House of Assembly early next year.

Thomas, who was the ULP’s candidate for South Leeward in 2015, also announced that he had no intention of offering himself as a candidate in the next general elections.

Prime Minster Ralph Gonsalves said, on Monday, that general elections would be held by the end of 2020, ahead of the March 2021 constitutional deadline.

Thomas said be has come to his decisions primarily because “the time, the energy, the money the effort, cannot be properly justified, considering the current state of play in the party.

“Consequently, to allow for the ease of transition and to allow for a sense of clarity to prevail, particularly among the long-suffering and neglected people of South Leeward, I formally remove myself as caretaker for the constituency so that others  who may desire to represent can move forward,” he told a press conference in Kingstown.

“I think these decisions are important because they allow me to do a number of things. They allow me to free myself up from any strictures I may have, to say and do what I want to so as the year 2020 rolls in,” Thomas said.

Recently, Meneva Glasgow, retired deputy executive director of the National Insurance Services, has been canvassing in South Leeward, telling constituents that she is the ULP candidate for that district in the next general elections.

Thomas, a social commentator with a weekly column for some 15 year, has long been a critical of the ULP, which he has always publicly said he supports.

However, that criticism did not wane much after August 2013 when he became a senator for the ULP administration and went on to become one of the party’s candidate in the 2015 poll.

After losing to the incumbent, Nigel Stephenson of the main opposition New Democratic Party by 118 votes, Thomas accepted the position of the Speaker of the House of Assembly.

Thomas has said in media interviews that he had told Gonsalves that he would only accept the post of speaker if he would be allowed to practice law.

Since the 2015 vote, Thomas and his law firm has won a number of prominent lawsuits against the government, in which the court ruled that the Gonsalves administration had violated citizens’ rights.

“I believe as someone who has been in the heat of the battle and the struggle for the advancement of the people of St. Vincent and the Grenadines since I was 14 years old, I still have a contribution to make to Vincentian development and Vincentian reality. And I want to not be hindered or hampered in any way as I go forward,” he told Tuesday’s press conference.

Thomas said he tendered his resignation as a member of the ULP earlier on Tuesday but that he did not want to disclose to the public the reasons he had given to the party for doing so.

“This is a position that I held since in 2013 and all Vincentians who have paid close attention would know that it was a rather contentious relationship,” he said.

The ULP’s radio station has often been used by its chief propagandist, Frank Da Silva, to launch scathing attacks on Thomas, who has said publicly that Da Silva would never do so if he felt he did not have the blessing of the leadership of the party.

Thomas told the media he had initially planned to make the announcements last week but he thought a lot of what he said might have been “cluttered with” the Independence celebration.

On Sunday, SVG celebrated 40 years of political independence from Britain and Vincentians were given a public holiday on Monday to mark the occasion.

Thomas said: “And I thought that once we get past Independence that maybe we could have a chance and an opportunity to say and do things with much more clarity and that is what I make the statement today rather than to make it last week.”

Thomas said he had planned to make the statement even before last week “but each time my better judgement told me that I should hold off. But, today is the day and here we have it.”

Regarding his resignation of the speakership, Thomas said it “is not unnatural” for one to announce a resignation months in advance.

“I just want to indicate where my mind is and where my mind is going so that persons who are in the business of selecting and nominating and doing all of those good things may have some time in which they can think it through and come up with somebody who is best be able to take up the mantle and proceed as speaker.”

The announcement of the intended resignation came about 19 days after Gonsalves told Thomas in Parliament that if he has something in his “craw” he should speak it.

“If you want to pick on me on for other reasons, pick on me for those reasons. Alright? If something is in your craw, Mr. Speaker, speak it,” Gonsalves told the speaker in a loud, angry outburst.

The Oct. 10 outburst had come less than a week after Thomas, in his weekly media commentary, contrasted his own treatment by the ULP to that of Camillo Gonsalves, the PM’s son.

He told the media, on Tuesday, that he and Gonsalves had not discussed what transpired in Parliament.

‘I am never drawn by money.’

Thomas said that while the speaker’s term runs until parliament is prorogue, “… I always felt that I would not want to sit the entire term because there are so many other things I wanted to do.”

He said that sometime ago Searchlight, a local newspaper carried a front page story about him saying would not sit on a party political platform while he is the speaker.

“That, to me, was a principled position that I took,” Thomas said. “If there are other things that I want to do, I wouldn’t want to be encumbered in anyway by being the speaker of our assembly.”

Thomas said that having served as speaker for almost four years, he is not sure that there is anything else left for him to do in that post.

“I have tried my best to be fair; I have tried to applied the standing orders, the Constitution of St. Vincent and the Grenadines, but we have a rambunctious bunch and people would push and try to pull your chains here and there. People try to rile you up.

“But I think I am proud that I have never been able to allow any individual to pull me into a personal debate or discussion on any matter in the almost four years that I have served as the speaker.”

The speaker, which was made a full time position when the ULP came to officer, gets an annual salary of some EC$82,000 annually, before deduction.

Thomas commented on the workload, saying:

“It is not a lot of time.  I am a student of these things so when the bills come, I would read them. But, I could easily just sit there and not read them. And I just thought that maybe it is something that I can better do.

“People say, ‘Why would you want to give up this?’ But I am never drawn by money. I am never drawn by power and privilege so part of the process of giving up the speaker is to show, look, I can let this go. I don’t have to hold it because it is really not mine to hold. It is mine to see how I can use it to advance our democracy.”

Thomas said the thinks that too often the Parliament has been reduced to “a tribune for petty banter and not really settled on doing the business that the people send us into that august body to do”.

He said that while that is the nature of national assemblies, “… a lot of time when you see a lot of rumpus activities taking place in parliaments, those countries are well-endowed; they are rich”.

He further said that many times those countries have “trained bureaucrats who can sit down and do a lot of the heavy lifting.

“In our Parliament, this is quote-unquote the cream and we have to spend the time thinking through the policies, thinking through the programmes, coming up with the ideas, we have to move from policy conceptualisation to policy implementation and in many respects, sometimes, I don’t think we do the best that we can do. And therefore, I don’t think there is anything else there for me and we are almost at the end of the year and very, very short into the New Year, I would step away.”