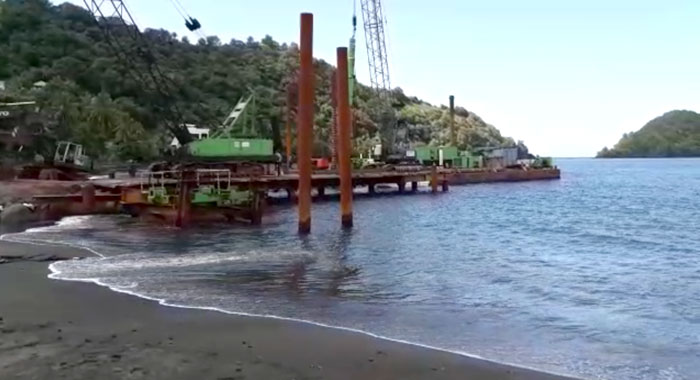 Construction work at the wharf in Chateaubelair.

Member of Parliament for North Leeward, Roland “Patel” Matthews is taking the government to task over what he presented as its wilful delay of the reconstruction of a the jetty and a wharf in Chateaubelair.

Matthews said, on Monday, that the government waited until this year to rebuild the infrastructure because a general election is on the horizon.

Matthews, a member of the main opposition New Democratic Party (NDP) was speaking at a village meeting in Sharpes, Chateaubelair, one day after Prime Minister Ralph Gonsalves denied that the delay was in any way linked to the elections.

Speaking at a Unity Labour Party (ULP) conference in Chateaubelair, on Sunday, Gonsalves said that he did not expect that the engineers would have taken so long to design the new bridge — which collapsed in November 2017.

Gonsalves, however, said he had US$1 million put aside for physical infrastructure works in North Central Windward, the constituency he represents in Parliament.

He said that the money has been redirected to Chateaubelair, where he said there is greater need.

“… I do that out of my deep love for all the people of this country, including the people of Chateaubelair and North Leeward,” Gonsalves said.

Regarding the jetty, which was badly damaged in 2013, Gonsalves said that while World Bank loans come with low interest and long repayment term, the downside is “the amount of hoops you have to jump through and the amount of review”.

He said that while reconstruction of the bridge has begun, the engineers have indicated that they underestimated the extent of the depths and had to import more and different piles.

“But over the next few months, before the end of the year certainly, the jetty, bigger and better, will be completed for the people of Chateaubelair and North Leeward,” Gonsalves said.

But Matthews said a consultant will review a project and see what is necessary before the project starts.

“So how could you award a contract without looking at the proper consultancy? Comrade lied again when they said that they ordered the wrong piles and hence, the reason for the hold up of the wharf,” Matthews said, adding that the wharf was damaged since 2013 and he has repeatedly asked in parliament about its repairs.

He said that the Sir James Mitchell NDP administration built the Chateaubelair wharf for the evacuation of people in the event that the La Soufriere volcano erupts.

Matthews said that Gonsalves was “holding Skully by the tail and waiting until an election year before the wharf starts.

“You can’t forgive him for that,” Matthews said.

He said that it is because election is around the corner that Gonsalves diverted funds to fix the bridge at Sharpes.

“Come on people. We are better than that and we deserve better,” Matthews said, adding that over the years, North Leeward has had to “wait until election before we can get something.

“Every election, Ralph Gonsalves and the Unity Labour Party treating us like dirt,” said Matthews who will seek a third five-year term as MP for North Leeward.