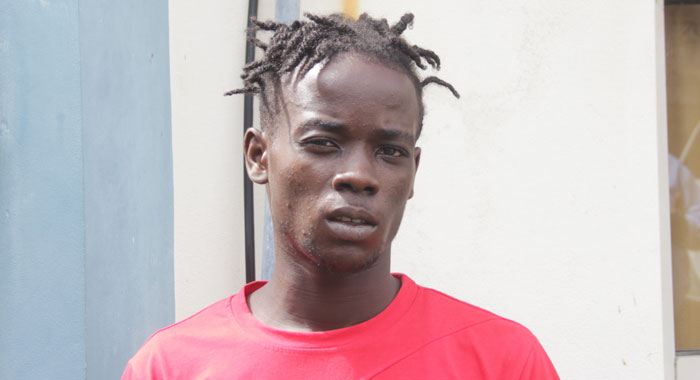 The 22-year-old Park Hill man who in December said that police shot him maliciously has been found guilty on two unrelated charges, bringing his convictions to 18.

Aldon Thomas appeared before Magistrate Bertie Pompey at the Georgetown Magistrate’s Court, on Monday, charged with using indecent language against Agnes “Massy” Collis and criminal trespass on the property of Linston “Germs” Seaton.

He pleaded not guilty to both charges and was convicted after a trial.

Seaton told the court that he was driving his taxi from Park Hill to South Rivers, around 7:45 a.m. on Dec. 16 when he saw a medium-sized dog running towards the vehicle from the left side of the road.

The complainant said he stopped the vehicle and the dog ran under it and came out on the right side of the vehicle.

Seaton told the court that around 9:15 a.m., he was at home room when he heard someone called him.

When he went where he had parked the vehicle in his yard, Seaton saw Thomas, who told him:

He said his (Seaton’s) sister, who lives next to him, came round and asked about Thomas’ behaviour and inquired about why he had threatened her brother in his own yard.

Seaton told the court that Thomas told his sister:

Seaton said that when his sister told Thomas that he was in her brother’s yard, Thomas left and went in the road and continued his behaviour for about 15 minutes — resulting in a crowd gathering.

Asked by prosecutor Assistant Superintendent of Police John Ballah how he felt when the defendant was in his yard, Seaton said:

“I became afraid. I don’t know what he could have done. He was very, very aggressive.”

Seaton said he did not give Thomas permission to enter his yard.

Meanwhile, Collis, a caretaker, told the court she was in her porch when she saw Thomas and heard him calling her brother.

She said she later a heard “noise”, so she went and looked and met the two men arguing.

The woman, who told prosecutor Ballah she didn’t give Thomas permission to enter the yard, said she asked Thomas, “How you brave so? Leave from far where you live to come in the man yard?”

“Did he say anything to you?” the prosecutor asked.

Collis said she didn’t give Thomas permission to enter the yard.

Investigating officer PC Joshua Robinson told the court that Thomas did not give a written statement but verbally stated “Officer, lies they telling on me”.

In his evidence, Thomas said he had just been discharged from hospital and met the dog “in a state” so I took it to the river and bathe it.

“Coming back from the river I see the black Noah jeep sailing coming up and pelt round the corner, so I start flagging down the jeep but it ain’t stop.

“It almost hit me on my right hand and it ran over the dog. It go underneath and come out behind.  At the time he hit the dog, I bawl and call out, “Boy, Germs you nearly bounce me dey!”

Thomas continued: “When I look, the dog on the ground. He (Seaton) continued driving and when I lift up the dog it had bruises.”

Thomas said he did not know if Seaton’s sister heard him swear at him and he responded in kind.

“She come round and try to talk to me but I ain’t pay no attention to she. I leave going up the road then I tell she is nah she I come to, is Germs I come to.

“I now get out yah (hospital), I now get shoot, I don’t want get shoot again,” Thomas said – referring to an incident at his home in December when police shot him in the back.

After finding Thomas guilty of the charge, Pompey, looking at the man’s prior convictions, commented:

“You’re far from being a saint eh! Sixteen previous convictions. I have a mind to send you to prison.”

At this point, Ballah rose and informed the magistrate that he defendant was on bail on an aggravated burglary charge.

“I now out of prison and just trying to make something happen.  I got me land I fighting dey with now.  I go and ask him (Seaton) something — I don’t interfere with people.  I did cuss the bad word but because he fuss cuss on me.”

At the end of the day’s session, Thomas had not paid the fine and was taken away to prison.