Carrier says its costs have increased 400% 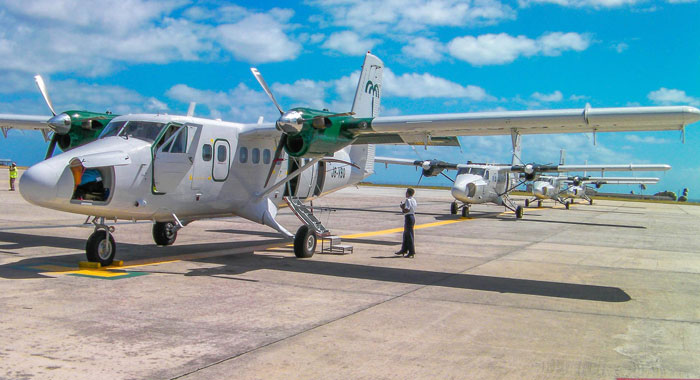 Gravel said his company can no longer afford to offer the current rates, in the face of a 400% increase in operations cost.

At the same time, the airline is charging fees that are 30% of what St. Maarten-based carrier Winair — which uses the same aircraft type on its routes — charges for similar distances.

SVG Air passengers travelling from St. Vincent to either Canouan or Union Island will be asked to pay an additional EC$15 one-way.

Gravel told iWitness News that the increase is but a fraction of what it should be, but his company is mindful of passengers’ economic circumstances.

“It is a real catch-22 and the government, they have no insight because the less people fly, the less commerce in all the islands and what money they collect at the airport is one-tenth of what they are going to lose is intraregional travel and commerce stops.”

He noted that in 2019, regional governments gave LIAT US$16 million to keep them in business.

“Why were LIAT’s flights so poorly attended? Because the ticket price was 80% tax now,” Gravel said.

“I have been going to town on this for years because every fall, some government comes out with a new fee.”

He said that his airline had stopped flying to St. Lucia because Castries imposed a further levy of US$37.5 on their tickets.

“We used to do daily services from St. Vincent and the Grenadines to St. Lucia. People can’t afford the ticket so we have to increase the fares.”

On Oct. 1, 2019, Gravel wrote the government outlining a case for an increase in fares but has received no response.

The letter said that 16 years ago, when SVG Air started using 19-seat aircraft to provide inter-Grenadine service, the lease on those aircraft was US$18,000 per month; it is now US$35,000.

The letter said that the no landing gear reserve is now US$120,000.

“Needless to say, the airport landing, handling and Nav com fees were 400% less,” the letter said.

The letter further stated that over the last two years, regional governments have “drastically increased and invented new taxes and airport fees in an effort to turn airports into profit centres”.

The letter said that this has had a massive effect on all regional and international carriers, and, in the case of SVG AIR, its core business  — “the wealthy holidaymakers keep us in business, without them we are not viable”.

The letter continued: “So by increasing the taxes on use of the airport, i.e. Barbados, Antigua, Grenada and St. Lucia, we have less visitors, less commerce inter-regionally and the airports will become less viable.

“Historically, the income generated by these same customers have cross-subsidised the local traffic for many years; without them, the price to fly from the mainland to the Grenadines will be three times higher.”

The letter further said that engineers and pilots have many options in the Far East and their other major metropolitan countries to work for flag carriers, and hence the cost to attract and keep them in the Caribbean is now 100% greater that it was 16 years ago.

The company told the government that it was not trying to make a profit on domestic flights but was keen to ensure that it does not lose money.

“Therefore, we are seeing an increase of 20% in an effort to recover the cost of operating the shuttle flights.

“Without this, we will have to reduce these flights to just selling seats on positioning flights.

“This will be once per day and with only three days advance booking window and only when we don’t have the higher yielding seats sold.”

The company asked the government for an opportunity to discuss the proposal.

It further said that Argyle International Airport “has increased the cost of maintenance by several hundred thousand USD per year in corrosion damage as well as hangar land rents.

“We will agree it is a safer airport, but it has come at a great cost to the local carriers, which can be seen by the millions of dollars invested in the three new maintenance facilities, an investment that is forfeited at the end of the 20-year lease term.”

“These costs have to somehow be incorporated into our prices and up to now they have not been. We will be seeking initially a 20% price increase; we are not sure that this will be enough, but it will be a start.”