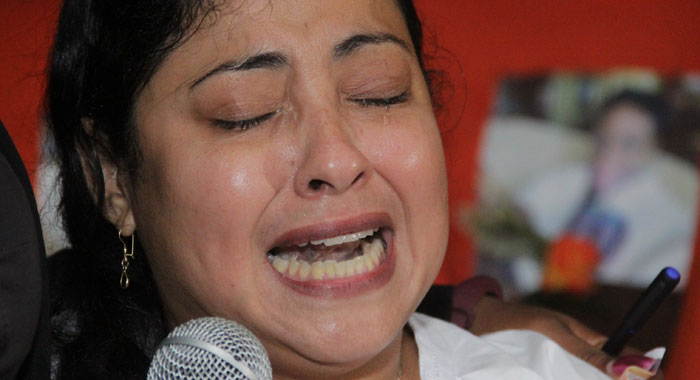 Neuricel Fonseca, a member of the Cuban medical brigade, weeps as she recites “No llores si me amas…” at Thursday’s vigil (iWN photo)

Though most of the tributes were done in English, the language of her adopted homeland, it was “No llores si me amas…” (Don’t cry if you love me”), read passionately in her native tongue, that seemed to move most, the hundreds of persons who gathered in Kingstown, on Thursday, to remember slain Cuba-born nurse, Arianna Taylor-Israel.

The poem, a tribute Saint Augustin wrote to his mother, roughly translated into English, begins, “If you knew the gift of God and what Heaven is!/If you could hear the song of the Angels and see me in their midst!”

And, Neuricel Fonseca, a member of the Cuban medical brigade in St. Vincent and the Grenadines (SVG), read the words with the measured pace and tone that one might anticipate at such an event.

But it was not long before she let loose the passion often associated with Latin American culture.

And by the time she read the 10th and 11th lines of the poem — “Believe me; When death comes to break the bonds,/as he has broken the ones that chained me” — Fonseca’s eye began to evidence tears, which reflected the light from the video cameras which fully illuminated her face amidst the glow of many lighted candles.

The line, “Wipe away your tears and do not cry if you love me…” came as she seemed to let lose pent up emotions as she continued, “Whatever we were for each other, we still are/ Death is nothing/ I have simply transitioned to the other side./ I am still I and you are still you.”

The poem was read at O.T. Car park in Kingstown, where nurses in their uniforms, doctors, devoid of their white coats, and hundreds of persons from various walks of life, many wearing orange in protest against violence against women, gathered in the nation’s capital to remember “Nurse Taylor” who was gunned down in the city one week earlier.

On Jan. 30 about 3:30 p.m., Taylor’s elder son was among students at the St. Martin’s Secondary School (SMSS) in Kingstown Park who went outside after hearing the sound of gunfire.

He might never have imagined that the person he would find barely clinging to life was his 44-year-old mother.

Police are alleging that Taylor-Israel’s husband, Vincentian national Mitch Israel, 57, mortally wounded her when he allegedly shot her multiple times outside his alma mater on a day that she served him with a petition of divorce.

She died about an hour later at Milton Cato Memorial Hospital — her workplace — where she was taken for medical attention. Her husband of 15 years has been charged with murder in connection with her death.

And, on Thursday, one week later, hundreds of persons gathered at SMSS, located at Kingstown Park, and made their way in a candlelight march through the city, and into the car park, located across the street from Milton Cato Memorial Hospital, where Taylor-Israel worked.

There, they sang in both Spanish and English, quoted scripture, prayed, and paid tribute to the slain nurse.

The vigil emphasised that victims of domestic abuse do not have particular facial features or expressions.

A smile masking a frown

In welcoming persons to the vigil, Neeka Anderson-Isaacs, communications officer in the Ministry of Health, quoted 2 Chronicles 7:14 in which God promised to heal the land if his people humble themselves, pray and turn from their wicked ways.

Psychologist Dr. Jozelle Miller told the crowd that nothing in life prepares a person for the traumatic experience of a violent crime, especially when it is committed against a colleague and friend.

“As a ministry, we mourn; the nursing fraternity grieves deeply; as a woman, the pain is indescribable,” Miller said, adding that she believes there are no words that can express the anguish felt.

“But even amidst our pain, we stand today in hope, in solidarity, praying that justice, firstly, will be served and, most importantly, that healing will take place, allowing each and every one of us to exhibit the virtues of strength in adversity, patience and tolerance as a buffer to the unkindness of this life”.

The psychologist referred to Psalms 46:1, which says God “is our refuge and strength, a very present help in trouble”.

Miller said she visualised Taylor-Israel’s beautiful smile “that permeated the darkest of situations because now, in hindsight, I am mindful that many times, in an effort to make it through her day, to perform her job with excellence, she mastered the art of wearing her beautiful smile, where probably there should have been a frown or a tear.”

The psychologist said there are many questions without answers and this could cause sorrow to linger longer.

“God is still God. And he is still in control,” Miller said.

In answering the questions of how to move on from the tragedy, Miller urged the persons at the vigil not to allow hate to win.

“Love conquers all. Love will continue to win even in death. Because God is love and our faith tells us that He reigns supreme that he conquered death and the grave,” she said, adding that there is reason to be hopeful.

What face does abuse wear?

Meanwhile, Senator Debbie Charles, parliamentary secretary in the Ministry of Education, said that Taylor-Israel’s death suggested that she had been a victim of abuse. “I want also for us to think of other persons who are suffering from abuse at home, abuse at the workplace, abuse in the community, because when a man picks up a gun and kills his wife, it is saying that abuse has been happening all along. It didn’t start on Thursday last,” Charles said

She asked the crowd what the face of an abused woman looks like.

“It looked like Taylor’s — a beautiful smile,” she said, adding that most people walk around with hurt and think they can find someone who is qualified to help.

“And I’m saying to us women, I’m saying to us girls, do not allow your situation to overwhelm you. Do not sit and think that there’s no one who cares. There are persons out there who care. You only have to look close enough to find someone in whom you can confide; someone who can help you through your difficult times,” Charles said.

The senator expressed condolences on behalf of the Government of St. Vincent and the Grenadines.

Charles said that Taylor-Israel was among the first Cuban nurses who came to SVG amidst a serious shortage in 2002 and lived near her (Charles’) mother in Montrose.

“So, it pains me because I have had a relationship with this woman,” the senator told the gathering and encouraged them to be resolute even as they are saddened.

“We have to think of how we are going to assist because crime is not just for the government…” she said, adding that everyone must play their role.

‘Let love prevail in our hearts’

Meanwhile, Minister of Health, Senator Luke Browne said that to the vigil was held to celebrate Taylor’s memory and to say her death was not in vain.

“Instead of cursing the darkness, we decided to rally in our numbers to light a candle and, simultaneously, to send a message about what we find to be acceptable in our society, and what we find to be unacceptable and the kind of country that we are fighting to create.”

Browne said that news of Taylor’s death pierced his heart because they had a special and personal relationship as she assisted with his summer programme.

“So, this is not something that is in the distance; this is very close to me. And this is something which touches home,” he said.

“We have to do all to make sure that we do better as a society and to remember that love is the answer. Let love prevail in our hearts and let it guide all our actions, and then we’ll be able to solve all the problems of this world,” Browne said.

He said that Taylor-Israel’s killing deprived the hospital of an excellent nurse [and]… two young boys of an outstanding mother, who worked hard for them, and who did her best for them.

“And this is a cost to society. Let us work together to make sure, as has been said, that she did not die in vain and that we celebrate her memory. We celebrate her life, and we ensure that we push and we press so that justice will prevail in these circumstances.”

After Taylor’s death, it emerged that she made at least three visits to the Questelles Police Station during the last five days of her life, telling them that her husband, who had a licenced firearm, was threatening to kill her.