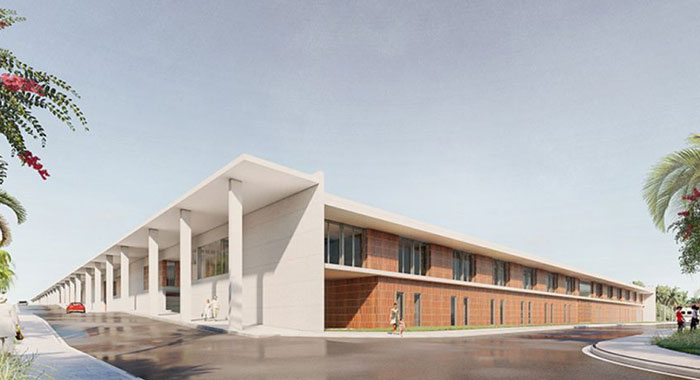 An artist’s impression of the acute referral hospital, published Jan. 19, 2020 on the Facebook page of Minister of Finance Camillo Gonsalves.

Minister of Finance Camillo Gonsalves is insisting that there is money in the 2020 Budget for the acute referral hospital his government plans to build at Arnos Vale.

His insistence came amidst another accusation by opposition lawmaker, MP for West Kingstown Daniel Cummings, who said during the budget debate, on Wednesday, that no such funds have been allocated.

Cummings said that the government came with the idea of an acute referral hospital after his New Democratic Party said, in 2015, that if elected to office, it would build a new hospital to replace Milton Cato Memorial Hospital, the nation’s main healthcare facility.

“They came out afterwards with an acute referral something,” said Cummings, who shadows the Ministry of Health.

“Listen, I challenge anybody to go through the budgets, capital budgets of the Ministry of Health from 2015 to now and show me where this government has any proposal for a new modern hospital in this country,” Cummings told lawmakers and media audiences.

“Do that. Moreover, Mr. Speaker, at a time when the ministry is talking about the designs being completed for this, … the Ministry of Health, in its plans for the year, has not a single word on anything like an acute referral hospital, not a word.

“Mr. Speaker, there are sections where it tells you what it is going to do, what are the expected outcomes and so on; no such thing as an acute referral hospital.

“And it’s not in the ministry of works. It’s not in any ministry. It’s not there. I heard the Minister of Finance talk, talk after I mentioned in the Estimates debate about it being locked into something.

Cummings said that what is “even more painful” is that it takes this government roughly eight years to move a project from concept to reality.

“Some take longer, some take less. And if they were serious about this hospital, Mr. Speaker nearly four years after the last election, not a single word, but alas, alas this year, this is the year when it matters, because people want to see how your manifesto stands up to action,” he said, speaking of the general election expected later this year.

“So what they’re doing, they go on Facebook and they say look at the beautiful design we have, but helicopter pad and all of that. When in fact there is zero, zilch, nada in the budget, in the capital estimates in the Ministry of Health or any department of government, where there’s any reference in anyway,” Cummings said.

At this point, Gonsalves rose and asked Cummings to give way, adding that he is loath to interrupt members during the debate.

The finance minister said he was sure that Cummings knows that the design of the hospital to be built at Arnos Vale is part and parcel of the RDVRP project.

“They RDVRP project is listed under the capital estimates of the Ministry of Finance and economic planning,” Gonsalves said.

He added that it was in response to the very issue raised by Cummings during the Estimates debate two weeks earlier that he informed that he included an appendix to the budget speech, all of the projects under the RDVRP.

“If the Honourable Member looks at appendix six of the budget speech he will see the acute referral hospital listed their designs for 1.2 something million US dollars, and that it will be com[ing] — the final designs for the hospital will be completed in March,” Gonsalves said.

“This was laid out precisely, Mr. Speaker, because of the allegation made during the estimates debate that the hospital does not appear anywhere in the budget.”

But Cummings stood his ground, saying:

“Mr. Speaker, I rest my case, as I said, there’s nothing in this budget document that speaks to that acute [referral hospital] before a hospital and, only at my prompting that they try to slip it in.

“Mr. Speaker you know… It’s the same way we can rush to say we’re breaking ground for sporting facility. When over 19 years nothing has happened,” Cummings said in reference to the ground-breaking ceremony for the athletics track at Diamond, which would be built instead of the national sports stadium promised two decades ago.

Cummings said:  “You know, Mr. Speaker, so many aspects of this budget speak to the narrow, divisive, vindictive partisan politics, exemplified by this government.”

4 replies on “MP accuses minister of promising hospital without budget”