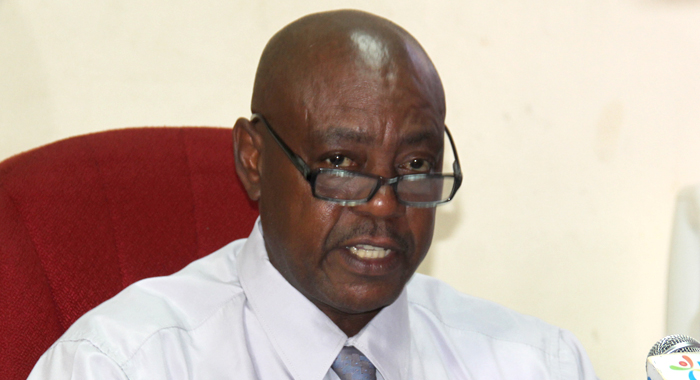 Police officers do not need a warrant to arrest an alleged domestic abuser if they believe that failure to act would result in serious physical injury or death.

The minister did not refer to the killing of a nurse, Arianna Taylor-Israel, on Jan. 30, allegedly by her husband, Mitchell Israel

However, his comment came at a time when the nation’s attention is focused on the failure of the police to arrest Israel even as they had such a warrant and amidst three reports over five days that he had threatened to kill his wife.

Israel is alleged to have used his licensed firearm to kill his wife outside their elder son’s school.

Stephenson said the law speaks of the avenues for action for victims, such as their right to protection and support.

Stephenson, who is also minister of Gender Affairs, said that the Domestic Violence Act says police cannot tell an alleged victim of domestic violence, whether male or female,  “go home, sleep, make up, wake up.

“The act, Mr. Speaker, provides broad outlines as to what is to be done. When a report of domestic violence is reported to the Royal St. Vincent and the Grenadines Police Force, the response mechanism, Mr. Speaker is instantly activated,” the minister told parliament and media audiences.

He said section 19 of the law mandates the police to receive and investigate reports of domestic violence.

“Mr. Speaker, and as such, it is necessary for these reports to be lodged at the police station and a medical report [form] be given to the victim so that … a medical form can be taken to … a medical practitioner and when that medical form is returned, the police will continue their investigations,” Stephenson said.

“The police also, under the Act, have the right and the power to act without a warrant in cases where there is reasonable cause to believe that failure to act may result in serious physical injury or death,” he said.

He further indicated that section 22 of the Act spells out the duty of the police when entering premises in domestic violence situations to assist any victim who is injured, to ensure the welfare and safety of any child or dependent, and to prevent any further breach of the law.

Stephenson said that the Gender Affairs Division is also mandated to assist victims of domestic violence.

“Once these matters are reported to the ministry, the Gender Affairs Division, We, within the ministry, continue to work with the persons — perpetrators and even the victims,” the minister said.

11 replies on “Warrant not needed to arrest domestic abusers”