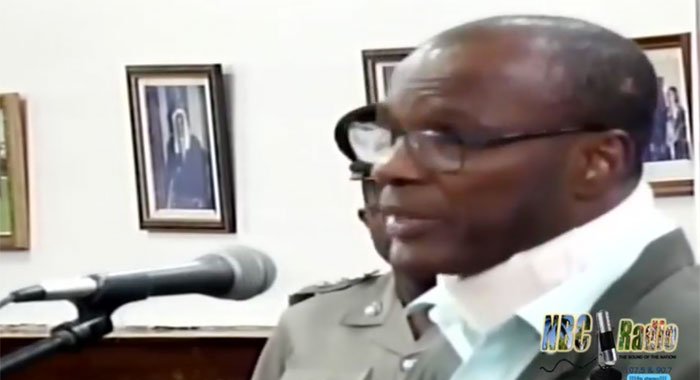 Member of Parliament for West Kingstown, Daniel Cummings was injured in a vehicular accident recently, he told Parliament last week.

Cummings, speaking on Tuesday, day two of the Budget Debate, apologised for missing the budget address one day earlier.
He told lawmakers he was injured on Jan. 30, while travelling on the Vigie Highway.

“… two vehicles slammed into the rear of my vehicle and gave me a severe whiplash, among other things,” said Cummings who was wearing a medical collar.

“I have been seeking medical advice and I have taken steps in accordance with the doctor’s requirements,” he said.

Cummings used the opportunity to raise the issue of vehicles being parked on the side of the main highways in St. Vincent.

“… there is a growing tendency for people to park their vehicles; I don’t believe this obtains in any regular society. It is unheard of that you can park for hours and sometimes days on the highway.”

He said a parked vehicle contributed to the accident in which he was involved.

“This accident was occasioned partly by the presence of a parked vehicle on the high way with one vehicle stopping in front of me, forcing me to stop and two vehicles coming behind and both of them, in the process, slamming into the rear of my vehicle.

“I think, Mr. Speaker, that with the influx of the very many vehicles on the already-stressed and pothole-filled roads, it is high time that some action be taken to prevent the parking of vehicles on public highways.”

He spoke of the area between Buccament Bay and Layou, where a number of vehicles are parked along the side of the road.

“… I am appalled, sometimes in the evening to be driving on that road and almost the entire section of the road, there are vehicles parked. I caution those responsible for traffic and transportation to look urgently at preventing fatalities on our roads.”

But Cummings was not the only person affected by ill health during last week’s budget debate.

The speaker, Jomo Thomas, told the assembly that Prime Minister Ralph Gonsalves had called to say “he is a little bit under the weather and he may not be here for the first part of the session and the entire session today”.

“He should not have been out yesterday because he was fighting the flu but so anxious was he to be here with us that he ‘hazard’ it and he came in here and it took some doing, some persuasion to keep him out of Parliament today, so he’d be out…” Straker said, adding that the Prime Minister of St. Lucia was also battling the flu.

But Gonsalves was back to normal by the time the debate concluded on Thursday and used all of the four hours allotted to him.

The prime minister said that that East Kingstown, South Leeward and North Leeward, three seats held by the opposition New Democratic Party, were easy pickings for his Unity Labour Party in the next general elections, which he said would be held by year-end.

However, MP for South Leeward, Nigel “Nature” Stephenson, responding to the picong, said that the prime minister, who turns 74 in August, does not have the energy.

Gonsalves responded: “I don’t have the energy? I have been talking now for three hours and where I dey here I could talk three more with complete coherence and when I am finished here, I can leave and I can go out by Pumpin with Shaunelle and I go could out there and I could sing and I could do the Comrade Shank even I just came out of the bed where I had two days of flu. God made me strong and I thank him for that.”

One reply on “MP injured in car crash”