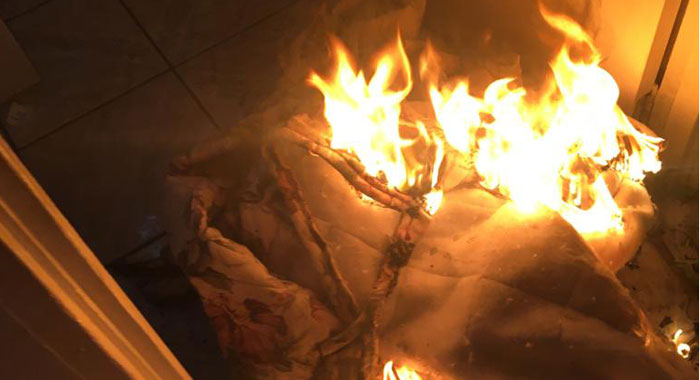 The female police officer said her husband set this fire in their house on Tuesday.

A female police officer is complaining that her colleagues are not doing anything about her complaints about abuse at the hands of her estranged husband.

The woman, who has been married for more than a decade, said that she has been having problems with her husband for six years.

The problems began after an improvement in her husband’s financial situation as a result of a legal matter.

“Don’t care how I report something they going on his side – he is so lie,” the woman told iWitness News on Tuesday.

The officer, who asked not to be identified, said that she and her husband are currently going through divorce proceedings to end their 10-year marriage.

The woman told iWitness News, on Tuesday, that she has been having problems with her husband threatening her and destroying her possessions.

“He taking my clothes and wipe down places, using them as pot towels,” the woman said, adding that she had a bar in her house and when she brings home drinks, her husband would pour them down the drain.

“I make reports, they ain’t doing nothing. They take statements,” she said, adding that she filed a report in early 2019, and it was not until months after that a sergeant of police saw it and dealt with the matter.

“I have a report down there [at the police station] where he beat up my daughter and nobody never dealt with it either. He beat my daughter, choked her and bit her in her head,” said the woman, who has a teenage daughter with her husband.

The police officer said that on Tuesday she was cleaning so she went into the yard to burn a few pieces of paper and some other items.

Her husband threw water on the fire, the woman said, adding that although she is the one who pays the mortgage, her husband only allows she and her daughter to use one restroom and one bedroom in the house and has taken out the lights.

The officer said her husband put out the fire and started to call her stupid, saying that when the fire cools down, he would take what she was burning and throw them on the upper floor of the house.

“I tell him he can’t do that,” she told iWitness News, adding that she put the stuff on the pavement and set them alight again and went upstairs.

“I came upstairs and when I was showering, I hear something go ‘blap’ behind the bedroom door but she dismissed it as her daughter.

“When I pushed open the door, the man went and he take one of the blankets I bought for $275 and he went downstairs and he threw all the fire inside the blanket and he brought it up and he threw it behind the bathroom door.”

The woman said she and her daughter had to run out of the house and she told her husband that the house would catch afire.

He then came and threw some water on the blanket in the bathroom, the officer said, adding that she dialled 911 and asked them to send the police in her district.

“They stayed long before they came. I had to call [another station] and report it to the police.”

She said that the police officers are always on her husband side and when they came they took a statement and told him to sign it, but she doesn’t know the content.

She said she told the officer that she was reporting against her husband and that they should arrest him.

However, the husband showed them a lock claiming that she had damaged it.

“When the police going in the transport — they ain’t bother with me and my report — he was laughing and tell me, ‘Yo’ nah see de police and dem nah study you.’

“He started following me everywhere and folding his hand and swelling up like he wah do me something.

She said she told the police officers what was happening.

“The corporal turn to me and say, ‘I didn’t see he swelling up behind ah you. Is there anything else we could help you with?’

The aggrieved officer said her colleagues drove away and left.

“So me and he still here tonight in war; when they gone, he here laughing after me. “

The officer said she had tried to reach the commissioner but he was not in.

Asked if they had thought about going for counselling, the officer said that her husband filed for divorce.

Asked how she feels, as a police officer, who is charged with enforcing the law to be enduring such treatment, the woman said:

“I do not want to take the law in my hand. They are not helping me.”

On Tuesday, iWitness News contacted the superintendent of police in charge of the district from which the police officers had been dispatched in response to the officer’s call.

The superintendent said he was aware of the report that the officer made that day but was surprised that she had told the media that nothing was being down about her complaint.

He said that the sergeant who has handled the report contacted him while at the female officer’s house and he gave the sergeant certain instructions.

the superintendent said that the officer’s case was being handled in keeping with policing and legal protocols in the same way that a matter involving only civilians would be handled.