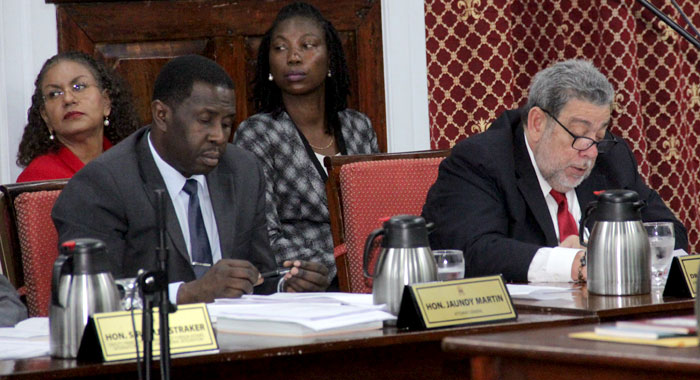 Prime Minister Ralph Gonsalves, on Sunday, responded to the allegation by Opposition Leader Godwin Friday that the government has repeatedly broken the Finance Administration Act and hidden it with another illegality.

On Feb. 4, as he began the Budget Debate, Friday said that while the Finance Administration Act allows the government an annual overdraft of EC$50 million at commercial banks, the government has routinely exceeded this limit.

He said that the overdraft must be settled by the end of that financial year but the government ended one year with EC$85.4 million to be repaid.

Friday further told lawmakers that the government further breaks the law by converting the amount over and above the EC$50 million to an “Accountant General Loan”, not approved by Parliament

Gonsalves was not present in Parliament when Friday made the assertion as the prime minister had taken two days off from the debate having been “under the weather”.

The prime minister, in the four hours allocated to him –all of which he used during the debate — did not respond to Friday and neither did Minister of Finance, Camillo Gonsalves.

However, Speaker of the House of Assembly, Jomo Thomas, a journalist and social commentator, wrote about Friday’s comments in his “Plain Talk” column last weekend.

Thomas said Friday’s revelation was the “biggest story of the 2020 budgetary debate”.

Speaking on WE FM on Sunday, the prime minister noted that Thomas had observed that neither he nor the finance minister had responded to Friday during the budget debate.

“On several counts, Fridays is wrong and Jomo took Friday’s word for it,” Gonsalves said.

However, Gonsalves said that in 2014, the overdraft had a ceiling of EC$75 million.

He said the second thing Friday said is that in addition to the resolution for the overdraft, which is moved after the approval of each year’s budget, “there’s also an act which is passed every year setting an outer limit as to how much you can raise by loans”.

Gonsalves said this figure for local loans is included in the Estimates.

“I’m not talking the overdraft now, which is a separate issue.

“… So If I have 75 million as an overdraft and I am paying 14% on the overdraft, I say, ‘You know what happen, I’m going to transform that half of that overdraft into a loan. So I can pay 8%. I don’t have to come and get approval for that loan, so long as I stay within the framework of the 100 million or whatever for that year, I can borrow locally,” Gonsalves said.

He said that the opposition leader, “by not understanding the issue look as though he misled Jomo on it.

“There is this assumption that somehow Ralph could just drive a horse and chariot through the law. But if a bank is lending you money, the bank would want to know that you have the legislative cover for it,” the prime minister said.

He said that the issue of the Accountant General Loan “is as old as the hills.

“Son Mitchell did it, Arnhim did it,” Gonsalves said, referring to former prime ministers Sir James Mitchell and Arnhim Eustace.

“Now, this is not to say that occasionally and from time to time within a particular year, if your limit is $50 million for an overdraft, or, at a particular time, 75, that it may not go slightly over 75 for certain reasons.

“The bank will know well, some monies are coming in and they say, alright we know that money is coming in so we allow you to go over 3, 4, 5, $6 million because, you know within a day or two it’s covered.”

Gonsalves said Friday is wrong when he said that the overdraft must be zeroed at the end of the year.