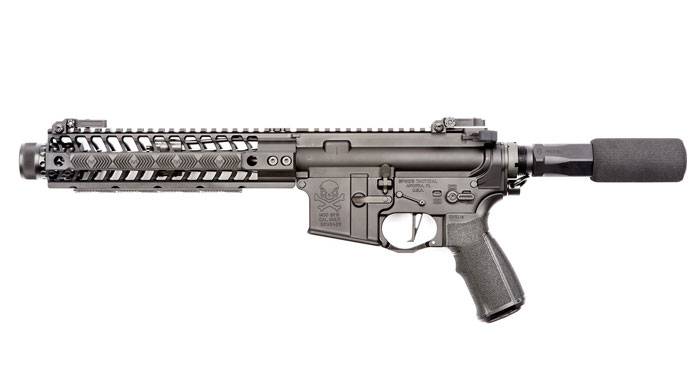 An internet photo of the type of rifle that the man had in his possession in Barrouallie.

A Vermont man was, on Friday, jailed for five years and six months for possession of a prohibited weapon, to wit, an AR-15 rifle.

Chief Magistrate Rechanne Browne handed down the sentence on Evander Myers, 28, after a hearing in which firearms expert, Sergeant Julian Cain told the court that the weapon is of the type used in several mass shootings in the United States.

Both defence and prosecution noted the capabilities of the firearm, which can discharge 30 rounds with one squeeze of the trigger.

“What do we want that for in St. Vincent?” Senior Delplesche said in his submissions on sentencing.

“M16 bullets, you know,” Delplesche said, referring to the calibre of ammunition that the firearm uses.

“One squeeze. Pow! Everybody gone,” he said.

The prosecutor said that St. Vincent and the Grenadines has a population of 110,000, adding, “Three squeeze of that could kill everybody — fully loaded.”

He said that these are serious times and while the defendant is young, “to have opened his innings, criminal innings, to make his debut … at such a high level, is serious”.

Delplesche said residents of St. Vincent and the Grenadines know what is going on in the country with firearms and questioned the reason for such a firearm being in the court.

The prosecutor noted that the offence carries a maximum sentence of 10 years in prison at the summary level, the law having given the magistrate powers beyond the general rule.

He asked the court to pass a sentence that reflects the seriousness of the offence.

Myers pleaded guilty to a charge that he had the weapon in his possession at Barrouallie on Feb. 18.

According to the facts, read by Corporal Atnel Ash, on Tuesday, Feb. 18, about 10:30 p.m., Corporal Nigel John of the Rapid Response Unit nabbed Myers with the firearm in Barrouallie.

The police, acting on information, had tailed the men from Layou to Barrouallie, where Myers was found with the firearm on the front passenger seat of a white Nisan Ultima, registration number PW750.

When the police intercepted the car, the driver — whose name was not disclosed — told Myers, “Skull, own yo’ thing.”

The defendant responded, “Is my own.”

In his evidence, Cain told the court that the rifle has automatic and semiautomatic functions.

The firearms expert testified that the rifle has a magazine capacity of 30 rounds and an effective range of 550 metres (1,804 feet).

The weapon has an extendable butt, is easily concealable and is designed to kill, Cain said.

The weapon is mostly used by military and paramilitary organisations and is very popular in the United States, Cain said.

He said that while the firearm was a relatively new one, it was not well kept.

The upper areas and handrails seem to have been through “some rough times” and were being affected by salt erosion but the working parts were intact, Cain told the court.

During cross examination by defence counsel Ronald Marks, Cain said there are different versions of the same weapons, some of which have a longer muzzle.

Cain, however, said he never saw the longer muzzle versions in images on television as the ones used in the mass shootings.

Asked if the firearm was designed for “close quarters combat”, he said they can be used for “close-quarters battles”, such as clearing buildings, and that the weapon can be lengthened by extending the butt, for instance, when it is used on a range.

The expert said that the muzzle, however, cannot be extended.

He further said that the muzzle does “not necessarily” extend the effective range of the firearm.

The lawyer then asked what the point of an extended muzzle is.

“No, please, your honour,” Cain responded.

“It ain’t must be more accurate?” Marks said, and the Chief Magistrate, who was presiding, told the lawyer that the witness had said no.

Marks apologised and said he does not have the credentials.

“Let’s deal with common sense now,” the lawyer said and asked the lawyer what happens to the bullet after the firing pin strikes it and the projectile is travelling down the muzzle.

“The rifling spins it, not so?” Marks said during the silence after his question.

Cain confirmed that was the case.

Marks said that the more rifling, the “straighter” the bullet will exit the barrel.

Cain said that was not necessarily the case.

The lawyer then said that whoever is reporting on the court matter would check it out on Google “and will see the level of your expertise”.

In mitigation, Marks noted his client’s age, adding that he is employed.

He said that Myers attended the Buccament Bay Secondary School but left at Form 3 to assist his mother with farming after his father left their home.

The defendant is the father of three children, ages 5, 3 and 2 years old.

Marks further noted that his client has no previous convictions and pleaded guilty at the first opportunity and also admitted to the police when he was intercepted.

The lawyer said that his client had explained to police that he was hanging out and having drinks with friends in Brighton.

Someone pointed out to him that someone hid a bag in the area of the gutter.

Myers went and retrieved the bag and was given a ride “going home” when he was intercepted.

The lawyer asked the court to consider the level of culpability that could be attached to his client.

He said that Myers’ action was foolish, adding that the defendant had said he really did not appreciate the nature of the weapon.

The lawyer said that modern firearms are not as big and intimidating as the older versions but are equally dangerous.

Marks said he accepted the expert evidence that the weapon has great potential to create harm.

He, however, said that there was no magazine and no bullets, and that unless an alternative magazine was found, the gun would have had to be loaded manually.

The lawyer said that in its present state, the gun posed as much danger as a club.

He said that if he were given a choice between the gun in its present state and a cutlass in a fight, “I would take a cutlass any day.”

“That would only beat you like a stick, as it is, and not very hard because it is very light,” Marks said, adding that he was saying that to say that things could have been much worse.

He noted that the weapon was off the street and society is a lot safer because of the actions of the police.

Marks asked the court to consider the offender and the sentencing guidelines and be as lenient as possible.

In handing down her sentence, the chief magistrate said that as indicated by both prosecution and defence, the firearm was an especially dangerous one that can do serious harm.

Browne noted the ruling of the Court of Appeal in firearm offences, including the case of Randy Shallow, where the Appeal Court upheld an eight-year sentence for a prohibited firearm.

The Serious Offences Court had imposed that sentence after a full trial.

The aggravating feature of the offence, the chief magistrate said, was the type of weapon, the fact that it was concealed in a vehicle and was being transported under the cover of night.

The mitigating feature was that Myers immediately accepted responsibility.

Regarding the offender, Brown noted that Myers was relatively young and that it was his first offence and that he had pleaded guilty at the first opportunity.