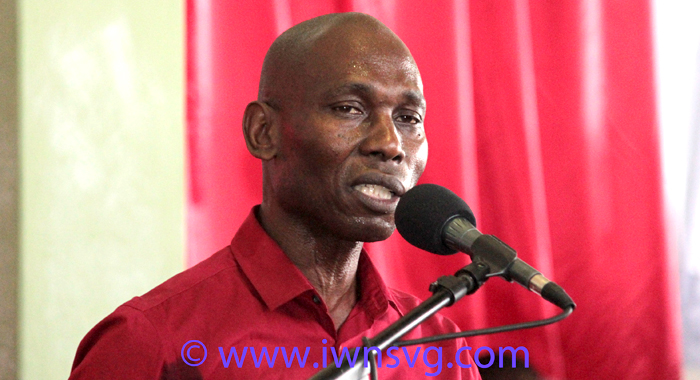 Speaker of the House of Assembly, activist Jomo Thomas has declined to comment on whether the Unity Labour Party (ULP), from which he resigned last year, deserves a fifth consecutive term in office.

“Well, that is not for me to say that is for the electorate to say. They are the ones who are going to vote, to decide who forms the next government,” Thomas said on WE FM’s “2020 Manifesto” on Friday.

Thomas was the ULP’s candidate in South Leeward in 2015 but failed to wrest the seat from Nigel “Nature” Stephenson of the main opposition New Democratic Party (NDP).

He said that as any government would do, the ULP administration would point to a number of things that it has done.

“If you listen to PM Gonsalves in the budget debate, you heard him waxing almost nostalgic, of all the things that the government did over the years and I’m sure those would come into the election campaign again. Whether people are still drawn to all of those things is another question.”

Thomas said that when he was a member of the ULP, he told the party that the Argyle International Airport — which opened in 2017, six years behind schedule, at double the projected cost — would not have made a fundamental difference in the 2015 vote.

The ULP held on to power in 2015 by the same one-seat majority that it had in the previous term, although most of its candidates increased their margin of victory.

Thomas said the airport might have more draw to Vincentians who live overseas, in terms of direct flights, than for citizens who are based at home.

He, however, said he thinks the 2015 election results could have been different had different strategies and tactics been employed.

Thomas also mentioned the geothermal project — which has, so far, not produced the results that the government had anticipated, the new port the government is proposing to build in Kingstown, and the two hotels that the state is building.

“Whether those capture the imagination of the people sufficiently to result in a return of the ULP government is left to be seen,” said Thomas, who is also a journalist and lawyer.

Thomas said the ULP is gunning for North Leeward and South Leeward, which the NDP retained by 12 and 118 votes.

“… these have historically been very narrow, marginal seats but the opposition won in 2010 and held on in 2015.

“In both seats, the ULP have reasonably attractive candidates but whether these candidates would be able to pull it off, is left to be seen.”

He said that ULP strategists must also consider that the NDP can flip North Windward and Central Leeward, which the ULP won by 323 and 313 votes in 2015.

“It is true that the margins in both of these seats are different,” he said, referring to the raw numbers.

“But every election is a different election,” Thomas said.

Thomas was unsure about what impact new candidates would have on the parties’ chances.

“The way in which party politics has developed in St. Vincent, the individual would only make a difference on the margins.

“Overwhelmingly, whichever individual goes up, that individual would be relying, fundamentally, on the support of the party,” he said.

He said a converse situation would be an individual with enormous wealth who can “splurge that around in the villages to the young people and probably will be able to get scores of them, hundreds of them to go out and vote.

“Unless that is going to happen, if you’re relying on the party to carry it, whether you are new or old, it’s not going to take you very far.”

Thomas said another issue would be the government’s performance over the five-year term and what it does in the months immediately before the vote.

“I’ve got to tell you that I don’t believe in this tactic where you backload everything for the last year, the last six months, because people are getting increasingly informed and they will not look this is juice now.”

Asked if road work at that stage would not help, Thomas said:

Asked if the NDP has done enough to attract new voters and to swing some votes from the ULP, Thomas said:

“It’s difficult for me to say.”

He, however, noted the trend in which the NDP has increased the number of popular votes it has received since 2001.

“So from a numerical standpoint, from a popularity standpoint, both parties are almost in dead heat,” Thomas said, even as he noted the SVG’s first past the post electoral system.

He noted that in 2015, the ULP candidates who won or retained their seats did so by larger margins, even as the NDP candidate garnered fewer votes, with the exception of St. Clair Leacock in Central Kingstown.

“So that’s a trend that is worth watching. That is a trend that may tell us something; whether the ULP’s going to be able to continue on that trend, or that there could be a reversal, is left to be seen,” Thomas said.