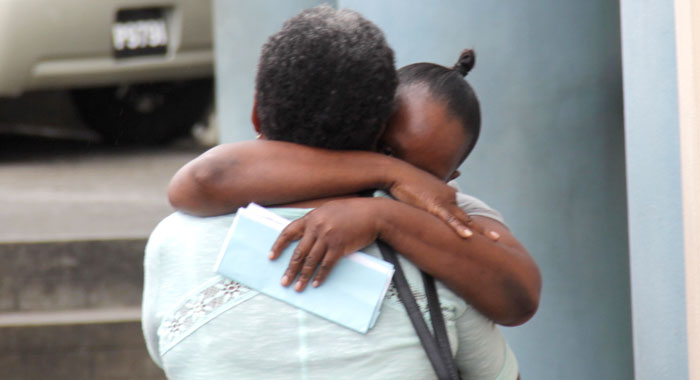 The defendant’s mother, with back to camera, embraces her outside the Kingstown Magistrate’s Court after Monday’s sentencing hearing. (iWN photo)

A 40-year-old Layou woman, who beat her 12-year-old son on Feb. 11 and 12, resulting in his hospitalisation, has been given a chance to get her life back on track.

Senior Magistrate Rickie Burnett, on Monday, at the Kingstown Magistrate’s Court, ordered no criminal sanctions for the woman, who has also been a victim of abuse.

The woman had been in prison since Feb. 14, when she pleaded guilty to two assault charges in connection with the incident.

The court had ordered that she be remanded in custody until the completion of a social inquiry report, which caseworker, Sandra Augustus read to the court during Monday’s sentencing hearing.

“Listening to the report, this is somebody who needs help. That has been her life—a life of abuse and neglect. She is passing on what she knows. Sad, but that’s the reality?” Burnett said when the prosecution inquired about criminal penalty for the woman’s actions.

In addition to ordering that the woman, who has six children by six men, undergo three months of counselling, with a report submitted to the court by May 29, Burnett ordered that the woman’s son remain in the custody of the state.

The child was taken into state custody after his release from hospital.

According to the facts read by Prosecutor Constable Corlene Samuel, on Feb. 11, the child returned from school and his mother told him to pick up some dry clothes and hang out some wet ones on the clothesline.

While the child was doing so, the mother came out of the house and assaulted him with a barrage of obscene words then proceeded to beat him with a piece of stick behind his neck.

After the beating, the child went into the house and slept until the following day.

On Jan. 12, the child returned from school and his mother sent him to wash his uniform, which he did. The mother also inquired of the child whether he had eaten his lunch.

He told her yes.

However, sometime later, the woman saw a piece of bread near a suitcase in a bedroom and started to beat the child, accusing him of lying to her.

The child was able to escape and ran to the Layou Police Station, located nearby; where he told a Corporal of Police Best that his mother was beating him.

As the child was talking to the officer, his mother came by and the child was able to slip behind the counter, making his way to the area where prisoners sit.

The woman pushed the female officer aside and continued beating the child in the police station, until a male officer was able to wrest the belt from her.

In her social inquiry report, Augustus revealed that the

the 12-year-old boy is the only one of the woman’s six children who lives with the woman, who is resident in Layou, with her common-law husband.

The woman, who works once per week as a domestic, had three previous convictions — one for indecent language and two for wounding.

While in prison, the mother told the case worker that she absolutely regretted her action and missed her son as he was the only one around to give her a cup of water is she falls ill.

She further said that she couldn’t sleep during her incarceration and spent a lot of time crying.

‘we have a real situation’

Recounting to the caseworker the first beating of her son last week, the mother said she had gotten a belt and had put her son to kneel and had beaten him over his back.

She said he ran outside and ignored her orders to stop running and she got vex.

In the case of the second beating, the mother told the caseworker that a tall, slim police officer had told her to come into the police station and beat the child if she was bright.

She then pushed the female corporal aside and continued to beat the child until the male officer wrested the belt from her.

As part of the report, the caseworker had also interviewed the woman’s mother, who said she was a quiet person growing up but had made bad choices as an adult and had a problem with drinking.

A second report was also prepared by the social worker at the Milton Cato Memorial Hospital, where the child had been warded after the beating.

Burnett said he was concerned about the opinion that the child had given in the report.

The magistrate, however, did not disclose the child’s opinion.

He noted that the maximum sentence for the woman’s offence was a fine of EC$1,500 or three months in prison.

“But we have a real situation before us,” Burnett said.

He asked the caseworker her opinion of what the court should do and Augustus suggested that the mother be ordered to undergo counselling.

The caseworker also suggested that the child be returned to the mother’s custody after she completed the counselling.

Augustus further said that the woman and the child will be monitored to determine if she is a suitable parent and that the counsellor would determine how much counselling she needs.

The caseworker further said that the child is in Grade 6 and if the father is contacted and capable, the child can be placed in his custody.

The caseworker also said that neither of the child’s grandparents was not willing to take him into their custody because he steals.

The senior magistrate noted that when the mother first appeared in court she had said that she does not drink but the report had indicated otherwise.

At this point, the defendant said, “Is like beer and things.”

“If you drink five, six,” Burnett said, speaking of the accumulative effective of several beers.

“This is a child that has not received the best from his parents. That’s what it is,” Burnett said, adding, “The child has given his opinion about whether he wants to live with her.

As the sentencing hearing was drawing to a close, the mother asked the court if she would be allowed to see her child during the three month period.

The counsellor, who had joined the caseworker in the dock said yes, adding she would have to speak with the child and mother separately and together.

The mother told the court that she did not mean to treat the child in the way she had.

The senior magistrate, commenting to no one in particular, said that when he was younger he knew of people being beaten while kneeling.

“Kneel down on grater; that was the usual,” he said, adding that the world had moved past this type of abuse.