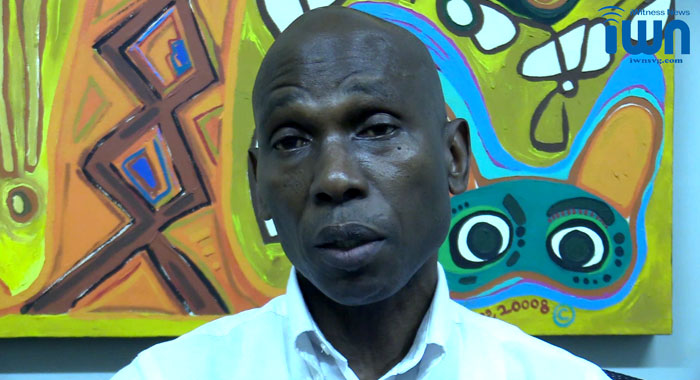 Speaker of the House of Assembly and former ULP candidate Jomo Thomas speaking to iWitness News on Monday. (iWN photo)

Jomo Thomas, who is quitting as Speaker of the House of Assembly this week, is declining to say if he would campaign against the ruling Unity Labour Party, from which he resigned last October.

He, however, said that St. Vincent and the Grenadines has “become too comfortable” with citizens taking and running with “pat answers” as if they have reached Jerusalem.

As a first-time candidate, in the 2015 general election, Thomas, lost in South Leeward when he attempted to unseat the main opposition New Democratic Party’s Nigel “Nature” Stephenson who was seeking a second term.

Since then, Thomas has fallen out of favour with the party, whose radio station has been used to attack him repeatedly even as he remained the party’s caretaker for South Leeward and House Speaker.

In a wide-ranging interview with iWitness News on Monday, which premiered on Facebook Wednesday night, Thomas was asked if he was hoping to make an argument against the ULP administration.

“I’m going to make an argument for St. Vincent and the Grenadines,” he told iWitness News.

His argument, he said, is that “there’s so much more that we can do.

“We can broaden our democracy. We can develop best practices; we can become more transparent. We can act in ways that are more empowering to ordinary people.

“For all the noise that we make in St. Vincent — and I would not be one, to deny that a number of important things has happened since the ULP has been in power — but with all of that we have a tremendous amount of unemployment in St. Vincent, particularly the youth unemployment.”

Thomas also said that there are a lot of infrastructure problems, still, such as poorly constructed roads.

He said his argument will be “for us to push even harder for our government ministers for our permanent secretaries for our civil servants to work even harder to ensure that we get the best bang for the buck”.

He mentioned that amount of monies that has been spent on roads.

He mentioned the South Leeward Highway, an EC$25.15 million project, which was completed in 2017.

Since then the government has had to do remedial work on the road to correct faulty workmanship.

“I’ve been back in St. Vincent for 15 years now and twice we had to dig up the Murray’s Road,” said Thomas who lived in the United States for two decades.

He said that very often the question is the quality of the work that is being done.

“So I don’t want people to think that because we probably have more university scholarships and more university graduates than ever before or because we have now universal secondary education, we are not thinking about how we place those university graduates after they’re done, or how we ensure that those students who are doing much better now, going to high school all of them and going to community college, many of them, how do they get to feel as though they have a slice — they have an investment in St. Vincent and the Grenadines.”

Thomas said those are the types of conversations he is hoping to have.

He recounted a years-old conversation he had in the United States with Maia Eustace (daughter of former Opposition Leader Arnhim Eustace), when he (Thomas) was the lawyer for the Vincentian students group in New York.

Thomas said he had made a presentation after which Ms Eustace told him, “You know, Jomo, nothing that you have said there exhausts the realm of logical thought.”

“It’s the first time I’d ever heard somebody articulate like that. But it was profound because it was saying ‘when you think that you have really drilled down and gotten all of the answers, look further because there are other answers to be had’.

“I think we have become too comfortable in St. Vincent and we take pat answers and run with them and believe that we have reached Jerusalem and we are still on the road and there all kind of robbers standing on the corner trying to knock us over.

Thomas said that having just left the ULP, he would not do public relations on behalf of the party.

“I have a clear view of the future. And where that is. I recall that when I became a senator of the ULP back in 2013, I wrote a column titled ‘Why I became a ULP senator’ and I said [to myself] I’m sure that ULP supporters are gleeful and NDP people are cursing me to end. “What a difference six years has made. ULP people are cursing me to no end and NDP people are a little bit more gleeful. So the tables have gone like 180 degrees. But what can we say? It is part of the process.”