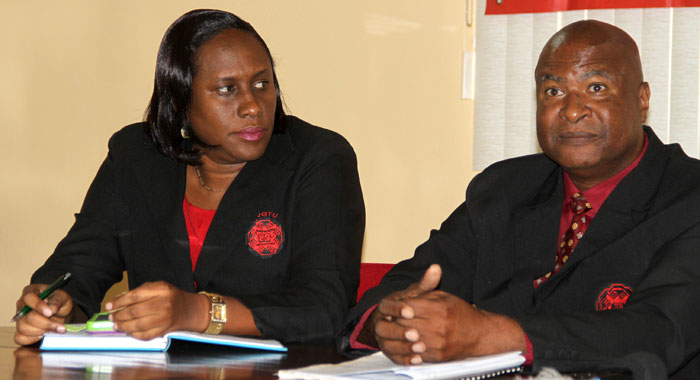 In this February 2018 iWN photo, Wendy Bynoe, then spokesperson of the SVG Teachers’ Union and then-president Oswald Robinson attend a Union press conference in Kingstown. Bynoe, who was elected to lead the union in 2018, was voted out of office this week and Robinson returned to the helm.

President of the St. Vincent and the Grenadines Teachers’ Union (SVGTU), Wendy Bynoe and her general secretary were booted out of office in election held this week.

Oswald Robinson, a retired principal, in whose executive Bynoe served as public relations officer before her elevation two years ago, defeated Bynoe.

The union did not disclose the vote count in a press release on Thursday, but Bynoe said in a Facebook post on Wednesday that she had garnered 463 ballots.

She congratulated the new executive on their election.

“I wish to express my heartfelt thanks to the 463 members of SVGTU who cast their votes for me. Thanks to all who campaigned with and for me. I fought a good fight and ran a clean campaign. My tenure as President ends on April 2nd at the Biennial Convention. See you there!!!” Bynoe wrote.

Bynoe, a deputy principal with 26 years experience in teaching, had campaigned on a platform to “continue to tirelessly advocate for a better deal for all members, defend gratuity and pension, continue to place renewed emphasis on teacher welfare, safety, security and material benefits, defend and enhance the Collective Agreement, work with colleagues to continue to strengthen all organs of the SVGTU, continue to strengthen fraternal relations of SVGTU both at home and abroad, continue to work to engender greater pride, passion and purpose among members”.

Robinson, who has 36 years as a teacher, had been a public relations officer of the union before becoming president.

His promise to member was “to work collaboratively with the national executive, general council and other structures of the union to offer effective representation”.

Kydd-Rhynd promised to “work relentlessly to provide strong leadership and promote the welfare of our members without fear or favour”.

Williams, in her campaign, had vowed to “represent the members of the SVGTU and to restore the confidence and faith in our Union which members once had by dedicating myself to the task at hand, working diligently toward better working conditions, salaries and the while creating opportunities for betterment of all members”.

Meanwhile, Andrew John was returned as 1st vice-president, having staved off a challenge by Fiona Charles.

Vanrick Williams is making his debut on the executive, having defeated Denish Hector, who was also hoping to debut as second vice-president.

The new executive will be installed at the union’s 21st biennial convention in April.

The changes in the executive come at a time when the union has begun negotiations with the government on a new collective bargaining agreement.

The union had said the discussions were ongoing and will continue in the months to come, addressing issues such as promotions and appointments, salary increase, and the release of teachers to perform civil duties.

“The SVGTU eagerly awaits the second phase of discussions as the organization continues to champion the cause of the nation’s teachers, ensures accountability to all stakeholders in the education process, and advances the quality of education that is offered to our children,” the union had said.

One reply on “Union head gets one term; retired teacher retakes reins”