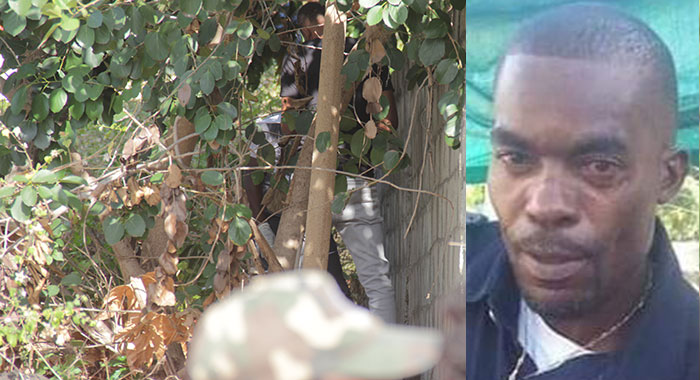 Police process the scene in Morgan’s Bay, barrouallie, where the body of Zimron “Murder” Fraser (inset) was found on Saturday.

Detectives have launched a homicide investigation after a man’s body was discovered near the seashore at Morgan’s Bay, Barrouallie around 2 p.m. Saturday.

Well-placed sources tell iWitness News that the body of 43-year-old Zimron “Murder” Fraser had what appeared to be a gunshot wound.

A loaded firearm was discovered at the scene.

Fraser’s body was found less than 200 yards from where the body of Davidson “Palo” Charles, 57, was met hanging from the roof of a house in early January.

Fraser was not known to be the holder of a firearm permit.

His relatives told iWitness News that they were not in the frame of mind, at the time, to speak to the media.

However, iWitness News has learnt that Fraser had complained to villagers about not being able “to continue” after a longstanding relationship in which he was involved ended sometime ago.

Police are said to have inquired about whether he had told anyone explicitly that he wanted to end his life.

Fraser’s body was found under a tree in a bushy area along a perimeter fence near the beach.

The body is said to have been found by another resident who had gone to check on a boat there.

Some villagers say they had seen Fraser alive Saturday morning.

This suggests that he died sometime between then and around 2 p.m.

One reply on “Another Bagga man dead in suspected suicide”