Couple steals drill from store, goes back to ask for bits 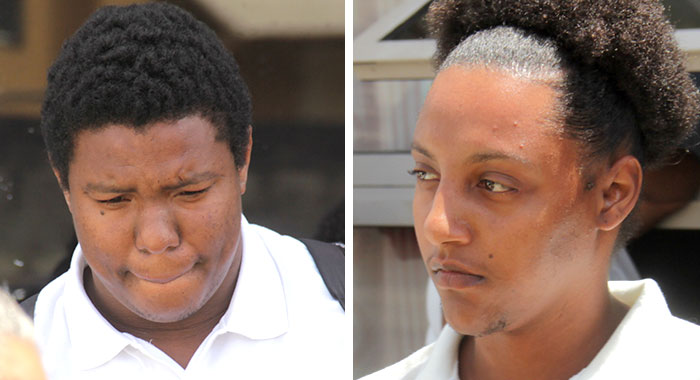 A man and his girlfriend, both 20 years old, were, on Monday, bonded for one year for stealing a drill from a hardware store in Kingstown.

Kesroy Ryan and Hazel-Ann Hazell were busted by CCTV footage, which was reviewed after they went back to the Gibson Building Supplies the day after their crime to inquire about bits for the stolen drill.

They pleaded guilty at the Kingstown Magistrate’s Court to a charge that on Sept. 7, 2018, at Kingstown, they stole one black and yellow Dewalt battery drill, valued at EC$745, the property of Gibson Building Supplies — the second such crime for which they have been charged.

Ryan had pleaded guilty, in October 2018, of stealing an EC$2.90 doughboy from Massy Store, at Stoney Ground.

His girlfriend was also charged in connection with the theft, but maintained her innocence and the charge against her was withdrawn.

According to the facts read by Prosecutor Police Constable Corlene Samuel, Susan Sam, a store clerk, was at the hardware working around 10 a.m. in the area where drills are stocked, when the duo, along with Ryan’s mother, entered the store.

They approached Sam and asked about tiles and requested help with a quotation.

Sam left the couple in the area where the drill was and went to the tile section to assist Ryan’s mother with the quotation.

The next day, Sam was in the electronic tools section when Ryan and Hazell approached her and asked her about bits for a Dewalt drill.

It was at this stage that Sam discovered that the drill had been removed from the bag and the bag left on the shelf.

The store has CCTV surveillance, which was reviewed, revealing Ryan removing the drill from the bag and placing it in Hazell’s handbag before they both left the store together.

The footage also showed that they left with Ryan’s mother after Sam had returned with the quotation for the tiles.

Ryan was contacted and he took police to his then stepfather, from whom the police recovered the drill.

Samuel noted that since that charge, Ryan has been convicted of theft in similar circumstances and was placed on a bond for a year.

In response to a question from Senior Magistrate Rickie Burnett, she said they were in a relationship.

The lawyer noted that her clients had pleaded guilty, albeit not at the first opportunity.

Robertson said that the couple sought help from the Human Rights Association — of which she is president.

She said they are on attachment at Marion House where Ryan is enrolled in a one-year engineering programme and Hazell is studying food and beverage, which is also a one-year course of study.

The lawyer said that since the offence, Ryan has indicated that he was frustrated and attempted to take his own life, resulting in him be treated at the Mental Health Centre.

She said that while she does not condone their action, having spoken to them, they acted out of frustration.

Robertson indicated that Director of Marion House, Jeanie Ollivierre was in court and was willing to pay whatever fine the court might impose.

The lawyer said that the drill was returned and was in good working conduction.

Robertson told the court it’s “a bit difficult because here we have 20-year-old children who have to resort to stealing because there is a sense of helplessness and hopelessness”.

She said it is unfortunate, adding that she had asked the couple why they had taken the drill and they said it was to see if they could start doing some business.

The lawyer said that while the couple’s action was wrong, they were trying to see if they could make a way out of poverty.

She asked that if the court was minded to impose a custodial sentence that it be suspended.

The lawyer asked that Ollivierre be allowed to address the court on the couple’s programme at Marion House, an application that the court granted.

In her submission, the prosecutor noted that while Ryan has a conviction for which he was bonded, he had stolen the drill before he was convicted for that offence — theft.

Samuel said the aggravating factors are that the couple went into a store together and took the items.

At this point, the magistrate interjected, saying that based on his memory, Ryan and Hazel had also acted together in the case for which Ryan had been convicted – for stealing a doughboy.

Samuel said that the couple work together to distract whoever is there to get what they want.

“That is how they go about doing what they are doing,” she said.

The prosecutor said that while Robertson is saying that the drill is in good condition, it is used and the hardware would not take it back.

In addition to Ollivierre, Jean Charles, a counsellor at Marion House also addressed the court.

Charles said she had counselled the couple and Ryan, especially, was very remorseful and was in tears.

She said she showed the couple that what they were doing is wrong and they resolve that they would not take that path any longer.

The counsellor further told the court that they couple had indicated that being a part of Marion House, they will try their best to work for what they desire.

Charles said she would continue to counsel the couple.

The senior magistrate told the counsellor that she and Ollivierre can do their part but the couple has to be willing to change.

“Because if they are not willing to change, they will be back in court,” he said.

Burnett said that while he takes no pleasure in sending young people to prison, 98% of accused persons are young.

“And most of them, of not all of them, are persons who had an opportunity to go to a secondary school and dropped out between forms 1 to 4.”

He said that sending the couple to prison was out of the question but they need to know that what they did was wrong.

Burnett said that the last time they were before his court, they had done the same thing in that they had an adult with them.

“It means that they plan what they do way in advance.”

He said would not burden Marion House with paying compensation.

“But Mr. Ryan and Miss Hazell, I want you to turn your life around. You all can’t be a couple who wants to live like this and if you don’t stop, both of you may go to prison,” the magistrate said, adding that he thinks it is the last chance for the duo.

He bonded the duo for one year in the sum of EC$1,000 each to be paid forthwith or three months in prison.

“I hope you all make a change,” Burnett said, adding that it pains him when he sees youth in court like that.

He said that while it is a job he had to do but when he goes home “the experience of the day is on my mind because to me, this is more than a job”.

7 replies on “Couple steals drill from store, goes back to ask for bits”