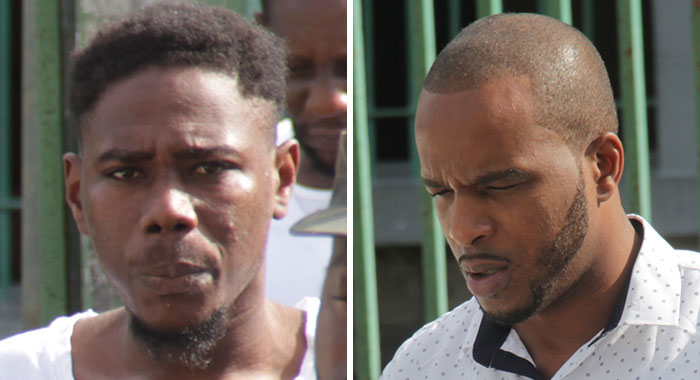 Kurt John, 33, a Vincentian convicted of three offences in the first two years after he was deported from Canada, was, on Friday, jailed for robbery, wounding, and possession of a firearm with intent.

Justice Brian Cottle ordered that John spend 13 years and four months in prison.
The sentence was handed down five years after John was repatriated for criminal activity in his adopted homeland.

Cato was 19 at the time of the offence and was the one who actually discharged the firearm wounding their victim.

The 29 days that the men spent on remand will be deducted from their sentence.

John was deported to St. Vincent at age 28, almost two decades after he migrated to Canada.

But within two years of his return to SVG, John was convicted of possession of a firearm and ammunition, crimes for which he served jail time.

The men were found guilty of charges that on Nov. 25, 2015, they committed robbery and wounding on the complainant, Sherwin Smith.

They were also convicted of possession of a firearm with intent to commit an offence.

The facts of the case, as summarised by Justice Cottle, are that around 9 a.m. on the date of the offence, Smith, the virtual complainant, was walking along a path in the Georgetown Cemetery.

Smith saw John standing in an area and when he got there, a masked assailant with a gun, who was later identified as Cato, came out of the bushes and told Smith to hand over everything he had.

Smith turned to John, who said, “You didn’t hear what the guy said?”

It was at this point that he realised that John and the masked assailant were acting in concert.

Smith handed over his money to John and then a struggle ensued between them.
The masked man fired a shot at Smith, hitting him in the knee. He discharged a second shot, which missed.

The gunman fled the scene and Smith gave chase.

He almost caught up with the robber, but was overcome by his injury and was assisted by a passer-by.

Smith was, however, able to identify the masked assailant as Cato and police recovered the mask and gloves used during the crime.

The gun, however, was never recovered.

In mitigation, John, who spoke with a North American accent said he had been found guilty of the “heinous acts”.

John, who left SVG for Canada at age 9 and returned at age 28, told the court that he had an ugly past “but I don’t live there anymore.”

He said that since returning to SVG he had had the support of his family and was on the verge of turning his life around.

“Every sinner had a past and every saint a future,” he said.

He told the court that sending him to jail when he was on the verge of “rehabilitating myself is going to put me 10 steps back from what I have accomplished as a law-abiding citizen and a young man.

“I do have a past. I am sure my lord is aware of that,” John continued.

He, however, asked the court that when passing sentence to consider that if he was a teacher 10 years ago and a criminal today, he could not be judged as a teacher.

John said that people have to be judged based on what they are at the point of sentencing and not their past.

The man said he has his family “and so much to do”.

“My lord, I am just asking for a second chance,” he said.

Meanwhile, Cato, in his brief submission asked the court for mercy and leniency.

He told the court that he had kept himself out of trouble since being charged.

“I am begging for some mercy,” the man said.

Before handing down sentence, Justice Cottle read from the victim impact report in which Smith said he had felt as if he was going to lose his foot.

The virtual complainant said he had chased after his attacker because he wanted to be able to identify him to the police.

The man said that because of the injury, he had to use crutches for two months and can no longer play soccer, an activity in which he had participated with several clubs.

The report further said that Smith could no longer carry loads on his head or climb steep mountain lands, and now has to pay people to spray his produce.

Smith said that he had to sell six of his sheep ‘under value’ out of desperation after he was shot.

In his sentencing remarks, Justice Cottle said that John appeared to have a criminal record in Canada but claimed to have forgotten the circumstances surrounding them.

He also denied involvement in the crime for which he was convicted, the judge said, adding that the convicted man showed no remorse.

In the social inquiry report, John’s relatives said that he has been caught up with bad company and seemed to have spurned the opportunity to change his life.

People in his community seemed afraid to comment on him the report said and the judge said that this speaks volumes.

Meanwhile, Cato, who at age 23 is about to become a father for the first time, has a history of using violence to settle disputes, the report said.

The report further said that Cato had suffered mental trauma in his last year of secondary school.

He, too, denied involvement in the crime for which he was convicted.

However, villagers said that Cato had a reputation as a robber while others said that his parents had refused to correct his untoward behaviour.

The men faced a maximum sentence of life imprisonment — a notional sentence of 30 years, on the robbery and wounding charges, respectively, and up to 20 years in prison for possession of the firearm with intent.

The judge sentenced John to 13 years and four months for robbery, 12 years for wounding with intent, and 10 years on the firearm charge.

Cato was sentenced to nine years for robbery, 12 years for wounding with intent, and 10 years for possession of a firearm with intent.

The sentences will run concurrently, meaning that the men would only serve the longest sentence.

The men were unrepresented and Renee Simmons appeared for the Crown.