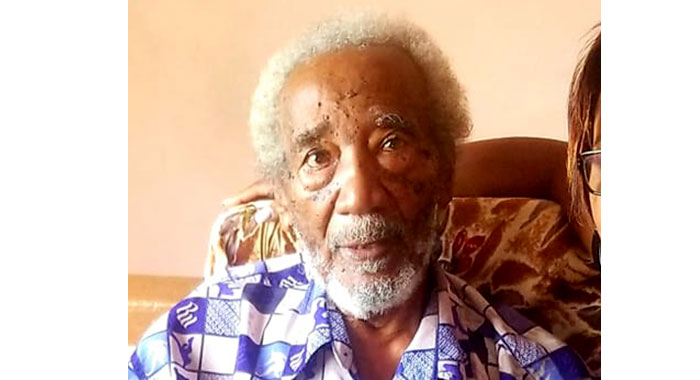 The brother of the Collins Village man implicated in the death of his 94-year-old grandfather says he, too, is looking for answer about what happened at the house Sunday night.

Police said on Monday that they are investigating the circumstances surrounding the death of Alston John, a retiree, which occurred at approximately 9:45 p.m. Sunday.

Police said their investigation has revealed that the deceased man was allegedly attacked and beaten about his body and head with an unknown object by a 20-year-old relative of the same address who is believed to be mentally ill.

The elderly man subsequently succumbed to his injuries and was pronounced dead on the scene by the district medical officer, police said.

A post mortem examination is expected to be carried out on the body of the deceased to ascertain the cause of death and police said that they have a suspect in custody, assisting the investigation.

John’s death was the 6th homicide recorded in St. Vincent and the Grenadines for the year 2020, and was one of two homicides recorded Sunday night. Edward Alexis, 28 years old Labourer of Trigger Ridge, Redemption Sharpes was shot and killed in the Central Kingstown community at approximately 9:43 p.m. Sunday, his birthday.

On Monday, Gareth “Icon” John, the deceased Collins Village man’s grandson and older brother of the suspect in the case, told iWitness News that his brother had never been admitted to the psychiatric hospital, neither did he know him to have ever been treated for a mental health issue.

John, a soca artiste, said he could not say exactly what happened at the house where his mother, grandfather, uncle and brother live, as he was not there at the time.

He said that his mother who, along with his brother and their grandfather, was at home at the time of the man’s death might be better positioned to say what happened.

However, John’s mother was unavailable when iWitness News and other media outlets visited the home on Monday, as she had gone to see the police in connection with a matter relating to the death.

John further said that he had not been able to talk to his grieving mother about what had happened.

“I wasn’t here. I came after the fact,” said John, who explained that he lives between that house and another located elsewhere.

He said that when the police arrived, they met his grandfather dead.

John told iWitness News that there had been an incident Sunday evening allegedly involving his brother, which resulted in the police telephoning him (John).

He said it was sometime after 5 p.m. Sunday when he received a telephone call from police in Mesopotamia asking him to pick up his brother.

John said that he was in the Calliaqua area where his car had overheated and he was waiting for it to cool down.

He said that based on the conversation with the police, his brother had been near the gate of St. Joseph’s Convent behaving “a kind of way” and the security guard there called the police.

The police called John because they wanted one of his brother’s relatives to pick him up at the station.

John said he gave the police his mother’s number so that she could make the arrangement with her brother, who also lives at the house.

He said his mother then called him after speaking with the police and he told her about his car troubles.

“She said, ‘Alright, get home safe’,” John said, adding that his assumption is that his uncle went to collect his brother because his brother was at the house later that evening.

“When I reach home, I meet the whole road full ah people,” John told iWitness News, adding that he had taken a couple hours to get home because of the car trouble.

He said that he did not know what happened between when he spoke to his mother and when he got home, sometime between 9:30 and 10 p.m.

“I could only speculate,” John said, adding that he did not want to do so.

He said that when he arrived at the house, his brother was there and police had to discharge two shots to get his brother to comply with their order to come outside.

“A whole heap a speculation going on,” John said.

John said that that while he does not know what happened after his phone calls with his mother and the police, his uncle had left the house to go back to fetch the police because of whatever happened.

And by the time they got back to the house, the elderly man was dead.

Regarding the allegation that his brother is mentally ill, John said:

“My brother is like a lot of youth in the area. A lot of them hang out in the bars, on the block and they does smoke and they does drink

He, however, said he does not know what the youths smoke.

“But sometimes they get high, they get loud, they get rowdy. People does say boy, something wrong with them youth man. I can’t tell yo’ if the man them crazy or not,” John said, adding that some people act differently when under the influence of alcohol and drugs.

John said he and his brother did not have a good relationship.

“Me and my brother were like north and south. I never use to encourage him to lime on the block. I wanted more for the man out of life than just liming pon a block. Not that he never use to try work,” John said.

He said his brother was employed as a labourer on a retaining wall construction project close to their house before the works were halted abruptly, with a number of weeks’ wages still owed to the workers.

“And he just been home since,” John said.

He said that this grandfather was “the best man ever”, noting that NBC Radio featured him as a nation builder in October 2019 when St. Vincent and the Grenadines celebrated its 40th anniversary of independence.

“He was just featured for nation building independence gone because he built the majority ah water tanks throughout St. Vincent and the Grenadines. That should tell you the type of individual he was — hardworking, honest, quiet, never smoked, wouldn’t ah drink,” John said, adding that this grandfather only drank during toasts at family celebrations, such as weddings.

“He never fight in he life, you know. My grandmother use to have to fight for him, all in school days, and they used to trouble him ‘bout that,” John said.

He said his grandfather was a self-taught person in construction.

Asked how he felt that his brother was implicated in his grandfather’s death, John said: “I vex; the situation vexing for me.

“He just been town last week. He used to go in town and walk from Tokyo and go CWSA and deal with his business up there. My grandfather was not a slouch;  94-year-old and if you see him, you think he’s 60. People used to tell him he look like he 60,” John said.

He said that his grandfather celebrated his 94th birthday last week Tuesday, March 10 and all his children who were around and able to attend celebrated the milestone with him.