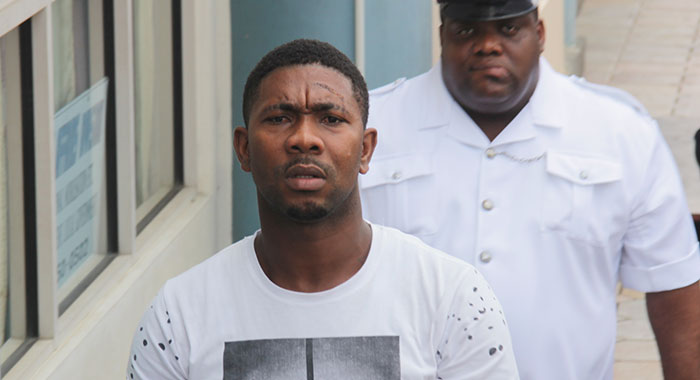 Kentish Jack will spent two weeks in jail before he was sentenced. (iWN photo)

The Redemption Sharpes man who burnt his 14-year-old brother’s clothes, trophies and medals have been ordered to compensate the child in the sum of EC$750.

On Tuesday, at the Kingstown Magistrate’s Court, Senior Magistrate Rickie Burnett ordered Kentish Jack, 27, to pay the sum by April 30, or spend three months in jail.

Jack was also bonded for one year in the sum of EC$1,500. If he breaks the bond, he must pay the amount forthwith or go to prison for three months.

The magistrate handed down the sentence two weeks after he sent Jack to prison while the court determined his sentence.

Asked how his time in prison went, Jack told the court, “It was not nice.”

The senior magistrate commented: “Well, I am happy to hear that.”

Jack set his brother’s clothes and athletics trophies and medals alight on Feb. 29 after an altercation surrounding a television that their mother, who lives in Canada, bought for their house.

Jack had taken the television, the only one in the house, and placed it in his bedroom.

Burnett told Jack that not because he is a magistrate, he understands the situation in which he found himself.

Burnett further told the defendant that he knows the mind of a 14-year-old in St. Vincent and the Grenadines in the present time.

He said it is not that the court did not pay attention to what Jack had done for his siblings before the incident, adding that somehow the burden of taking care of the family had fallen on him.

“But, even if your brother strayed, as he did, I still, up to now, cannot understand why the only thing that would come to your mind is to light a fire and burn up all his things.”

Burnett said that action was “a leap”, adding that he would have understood if Jack had taken a belt and flogged his brother.

The magistrate further told Jack that when he appeared before the court on the last occasion, he showed no remorse.

“You appear as a different man today because I believe that short stint on remand might have helped you because you had a short time to reflect,” Burnett said, adding that he hopes that Jack did reflect on what he did.

He said that he hoped that Jack promised himself to control the temper that he seems to have.

“You have to bring that under control because if you don’t, you are likely to be back in court,” Burnett said.

He told Jack that he wants him to go back home and reconcile with his brother and to continue to take care of his other siblings and to use his experience to make him a better person.

The magistrate noted that the trophies that he destroyed by fire cannot come back in that form.

The magistrate also suggested to Jack that he place the TV in the living room.

“If you want one for your bedroom, go and buy one,” Burnett said.