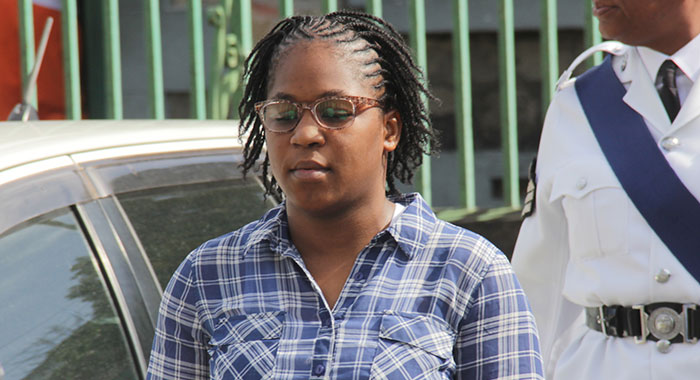 Diana Caine on her way back to prison to complete here sentence. (iWN photo)

The then seven-months-pregnant woman who was, in August 2017, charged with the murder of her 3-year-old son, has been sentenced to spend a further four years, two months and two weeks in prison.

Justice Brian Cottle said, last Friday, that Diana Caine, who was 23 at the time of her crime, had shown remorse by her guilty plea and was a good candidate for rehabilitation.

He, however, said that she seemed to need psychological counselling and support and the court ordered that this be provided to her in prison to prepare her for reintegration into the society on her release.

Caine, a domestic, of South Rivers, who had her first child at age 17 and has three surviving children, was handed the sentence after she pleaded guilty to manslaughter, a lesser charge, last month.

The facts of the case, as summarised by Justice Brian Cottle at the sentencing on Friday, are that on Aug. 24, 2017, LJ Keran Leran Jack, Jr’s father left him in Caine’s care.

Sometime that day, a neighbour heard the child crying loudly and inquired about what had happened.

Caine, who was 23 at the time, told the neighbour that she had punished the child for defecating on himself inside the house.

The neighbour later heard the child crying again and inquired and heard Caine using expletives while threatening to break the child’s neck.

Later yet, the neighbour saw a crowd leaving Caine’s house and realised that the child was being taken to the clinic, where he was pronounced dead.

In mitigation, Caine’s lawyer, Ronald Marks, told the court that his client had no previous convictions and pleaded guilty, adding that these are two of the most powerful mitigating features in the case.

He said that his client, from the inception, had told police of her involvement but did not deliver the fatal blow.

The lawyer said that Caine accepts that she was involved along with her boyfriend in the reprimand of the child, which escalated and resulted in his death.

On that factual matrix, the woman pleaded guilty, the lawyer said.

The lawyer said that Caine’s ex-boyfriend (who was not the child’s father) was placed in the room when the child died but he (Marks) hadn’t seen a police statement from the Caine’ former partner, who was also not called to testify at the preliminary inquiry.

Marks noted what he said was the minor role that Caine had played in relation to the death of the child.

He said it was important to note that prosecution’s case was based substantially on circumstantial evidence.

He added that in the circumstances, circumstantial evidence could be strong, but that it did not contradict anything that Caine had said from the beginning.

However, in her response, Director of Public Prosecution, Sejilla Mc Dowall, who represented the Crown, said that she was surprised by Marks statement about Caine’s ex-boyfriend.

She said that the Crown has disclosed all statements, which included one by Caine’s ex-boyfriend.

The prosecutor said that from the inception, Caine did not implicate her boyfriend at all in the death of the child, adding that instead, she offered a theory that the child had fallen.

In his sentencing remarks, Justice Cottle pointed out that Caine is the mother of three surviving children and had dropped out of school at Form 3, after attending irregularly, and often late.

She is now a pre-diabetic and had been a recreational user of alcohol and cannabis.

One of her daughters is in the care of the state because of abuse, the judge said, adding that during Caine’s childhood, she experienced extreme poverty and frequently did not have enough to eat.

Caine gave birth to her last child while in prison and has not been able to adequately care for the child.

Caine’s mother described her as a respectful and mannerly person who she knew to have used a belt to discipline her child, but not in a way to cause death.

However, Caine’ grandmother saw Caine’s mother as irresponsible and having largely contributed to Caine’s misfortune.

He, however, ended the relationship because she was irresponsible and he took the child into his care and never sent him back to visit his mother until he was two years old.

And even then, he only sent the child for a few days at a time.

Justice Cottle said that the aggravating features of the case are that the child was a vulnerable minor who met his death while in the custody of someone who should have been most inclined to protect him.