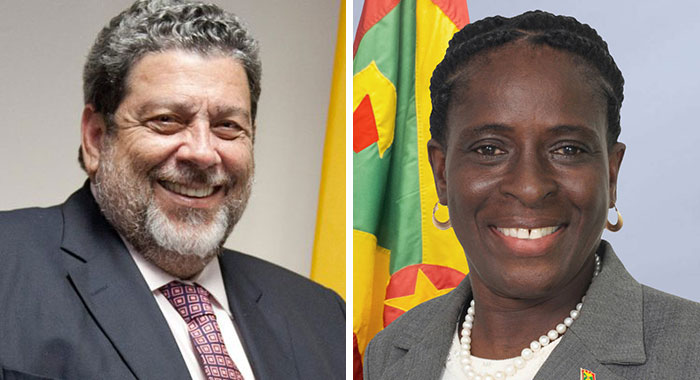 Grenada has denied refusing to open its port to receive two of its nationals who had been stranded on a cruise ship, as Prime Minister of St. Vincent and the Grenadines, Ralph Gonsalves claimed.

“I was shocked to see a report which said that Grenada turned them down and so another country has taken them on. I think it’s very sad, I think it is very far from the truth,” Clarice Modeste, Grenada’s Minister of Tourism said on radio in St. George’s on Thursday.

She said that while the false story has made it into the media about her country rejecting its nationals, St. George’s had been silent on the assistance it gave in repatriating two Vincentians during the COVID-19 pandemic.

“I am sure you did not hear anything about that in the media. I don’t think any Grenadian knew that this government facilitated that and it happened … The shoe was on the other foot before, we did what we had to do, recognising that we are all in this together, that we are a region and we need each other and that is still my statement on that.

“… we are a region and we need each other and we should be there to support. Grenada will still support any person of other nationality who happens to get to our shores and remain stranded.  We will facilitate and you will not see it in the media. This is our policy, I think it is the best but I felt compelled to say that because I am hearing it in all different media.”

Speaking on NBC Radio on Wednesday, Gonsalves said that Bishen John, head of the SVG Port Authority had told him that the Grenadian government had said that the cruise line could not repatriate the two Grenadians that day.

“… because their port is closed and they have to open it and they wouldn’t open it just for two, they can come on the day next week when Disney is coming,” Gonsalves said.

He said that the cruise line had agreed to pay for the quarantining of the Grenadian, until their COVID-19 status is determined.

“And after the 14 days or whatever time … the Ministry of Health could determine that they could leave at that point and then they’re like Vincentians everywhere, if you don’t have your own home, you go and check in at a guest house or hotel…” Gonsalves said.

But Modeste said that it was the cruise line that had asked Kingstown to take the sailors even as her government was in discussion with Bridgetown to have them stay in Barbados until being transferred to St. George’s.

She said that one Tuesday, she received a call from an agent saying that the cruise ship had two Grenadians to repatriate the next day.

“The next day! The next morning,” Modeste emphasised. “Our cruise ship port is closed and so there were challenges in terms of the logistics.”

Modeste said that some of the cruise ships stay in Barbados for a while and the one proposing to repatriate the two Grenadians was there when it informed St. George’s.

“So that didn’t leave us any margin for error,” she said, adding that her government discussed having the two Grenadians placed in accommodation in Barbados.
Modeste said that Barbados has accommodation and, from time to time, holds people who have to be transferred to other countries.

“And my thing was could you put them up for a night or two and we will check with LIAT and see when they are coming in with cargo because when LIAT comes with cargo, they have brought in one or two passengers who are stranded. They have done that.

“And I said give us a little time, because it’s today for tomorrow and to open; it is a little bit tight for us. And they agreed and say they will go and check with LIAT and so on.”

The Grenada tourism minister said that the next thing she heard was that the cruise ship had asked St. Vincent to take the Grenadians.

“And they called me and asked whether they could leave them there. I said, ‘Well, what is the arrangement and I called a senior person from the  cruise line and they said they will pay for them to stay in a hotel that is on the  beach for a couple days and that will give me the time to make the  arrangements for the transfer.”

Modeste said she spoke to persons in St. Vincent on the matter “and they said they will take care of them, they will do the testing, and we talked about a protocol and I discussed with our COVID chief coordinator and he said, let us bring them in at the earliest opportunity.”

She said that the two Grenadians landed in St. Vincent on Wednesday and she was in constant communication with the relevant person in Kingstown.

“I asked them to give me the numbers for the two persons just so that we can check on them and so we are, at this time, making arrangements,” she said, adding that that her government was arranging for PCR rest for the two nationals.

“…  just so that we know what we are dealing with and how to manage it, and we are going to bring them home shortly,” Modeste said, adding that her government is committed to its nationals.

The tourism minister said Grenada is in discussion with other cruise lines regarding the dates on which they would repatriate nationals.

“We think it is fairer to give us a few days advance so that we can do what we have to do and we will work with that,” she said.

The development comes in a month when Gonsalves said he would not have granted permission for two flights from the US to repatriate 300 Vincentian sailors, because the cruise line had not abided by the terms of Kingstown protocol for the repatriation of sailor and oil rig workers.

The story of the two Grenadians is the last in a verbal spat between Kingstown and St. George’s over their different approaches to the pandemic.

Grenada had closed its borders, while SVG’s remains open, and in March, Prime Minister of Grenada, Keith Mitchell complained about persons from the Grenadines travelling to Grenada although its borders were closed.

In response, Gonsalves invited Grenadians on that country’s Grenadine islands of Carriacou and Petite Martinique to come to the southern Grenadines, in a structured manner, to buy food and fuel.

Mitchell has made fun of Gonsalves, who appeared in a photo at Argyle International Airport, carrying a box, purportedly containing rapid tests for COVID-19, but labelled “blood glucose test strips” with a 2018 expiry date.