Gov’t accused of using sailors to give hotels business 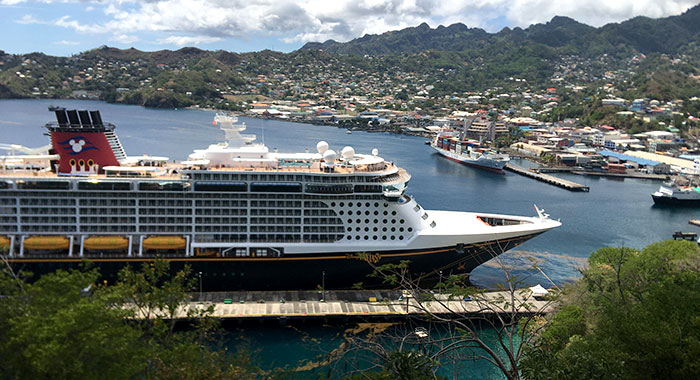 The Disney cruise ship in Kingstown on Wednesday. (iWN photo)

A relative of one of the 25 Vincentian sailors who returned home on a Disney cruise ship, on Wednesday, is questioning the motivation of the government, after the sailors were placed in 14-day quarantine at two hotels, although they tested negative for COVID-19.

The relative told iWitness News, on Wednesday, that while many people might see nothing wrong with this, it comes at great psychological strain to the sailors who have already spent weeks in isolation on board their cruise ships.

Many Vincentians might not know, the relative said, that one Vincentian sailor has suffered a nervous breakdown aboard a vessel as a result of the isolation protocols.

“We have all read it. The effects on those guys of being on that ship for so long, some of them had to be in their rooms for days,” the relative told iWitness News, hours after the sailors were ordered to undergo quarantine at two hotels.

“It has an emotional effect on them. So you reach now to your home country, you have followed all the protocols, you are not sick — confirmed by the report of the ship, confirmed by the rapid test by the Ministry of Health — and you are not allowed to go home. Why can’t the playing field be level?”

She was referring to the response of the government to Carnival when the cruise line repatriated two batches of Vincentians — 92 and eight — earlier this month.

Unlike Disney, Carnival did not agree to pay for the quarantining of all of the sailors it repatriated to St. Vincent and the Grenadines.

The company, therefore, paid for the quarantining of two sailors who had tested positive — on rapid testing — for COVID-19 exposure, and their four shipmates, the government said.

Carnival is also said to have paid for the quarantining of those sailors who did not have suitable facilities at their homes.

Those sailors were quarantined at Buccament Bay Resort, which had been closed since December 2016.

However, the Carnival crewmembers were sent home, within days, to complete their quarantine, after the more accurate PRC tests for COVID-19 returned negative results for all of them.

The relative of the sailor who spoke to iWitness News, said that Disney, on the other hands, had agreed to pay for the quarantine of the sailors.

They told iWitness News they believe that this is the reason why the government decided to keep the sailors at a hotel for 14-days, although they have tested negative for COVID-19.

“And that is why I concluded that the whole idea was not about bringing home sailors. It was about getting money from these cruise ships. You do the maths. Royal Caribbean is coming … with 435 persons. Multiply that by $100 a night by 14 days and you will get EC$1,600,000 equivalent to US$600,000,” the relative told iWitness News.

The relative said that the sailors are being housed at two hotels in the country’s hotel belt in southeastern St. Vincent.

On Thursday, the National Emergency Management Organisation (NEMO) said that 25 results for the COVID-19 PCR tests done on the Disney Cruise Lines’ crewmembers who returned to SVG on Wednesday are negative.

NEMO, however, said the sailors would continue their quarantine “in a government approved facility for the entire 14-day period in keeping with the established quarantine protocols which refer to compliance with the conditions of quarantine, and the precautionary stance of the Health Services Subcommittee”.

At the end of the quarantine period, a determination will be made on whether a second PCR COVID-19 test will be conducted on any crewmember.

In the same press statement, NEMO said that 30 Vincentian students studying in Jamaica returned home on a chartered flight on Monday.

“In keeping with the existing repatriation protocols, the students were screened on arrival at AIA for COVID-19 exposure, using rapid tests. Some of them were additionally subjected to COVID-19 PCR testing. All tests, both rapid antibody and PCR, were negative for all of the students,” NEMO said.

“These students, assessed as low risk, will complete the required 14-day quarantine in private homes and apartments.”

A batch of 15 students also arrived, on Thursday, from Jamaica, NEMO further said.

These students “will be subjected to the same repatriation protocols as required by the Health Services Subcommittee,” NEMO said.

In the interview with iWitness News, the sailor’s relative said that the seafarers had followed the physical distancing protocols for the weeks that they had been aboard their vessels awaiting repatriation.

“The Ministry of Health came, they did their testing, the results came back. All of them tested negative. Now, this is what got me confused. Remember the government was in negotiation with these ships. The cruise lines, during these negotiations, decided they are not paying for quarantine. Just like the governments said they were going on the maritime laws, these cruise ships, know maritime law to a T.

The relative told iWitness News that this would be the case when Royal Caribbean vessel arrives with hundreds of Vincentian sailors.

“They are adamant that they are not paying for the quarantine. … and I now have to agree with the point that the whole idea — and this is my assumption also just like many other persons — is just to put money into hoteliers’ pockets.”

The relative said that the Disney cruise ship arrived in Kingstown around 11 a.m. and a health official came to the sailors around 5:30 p.m. saying they had gotten the results and all persons were negative, based on the rapid tests.

“‘However, you guys are not allowed to go home,’” the relative said, quoting the health official.

“The playing field could not have been level this evening only because money was involved, because, as I told you, Disney was the only cruise line that agreed to pay for the quarantine.

“I don’t know about Disney but you have people coming in on that other cruise ship that is coming in there with nervous breakdown, with blood clots, with all kinds of sicknesses. You guys don’t even understand the effect…”

Asked to respond to people who say that even if the sailors are not ill, the country benefits when the cruise line pays for their quarantine in hotels in SVG, the relative said:

“I understand the country benefits. But I agree with the view that has been circulating — and this is based on my own personal experience with what I saw happening today (Wednesday) — that the idea was really to put money into the hoteliers’ pockets, to get money from the cruise line. So now, my whole thing is it wasn’t just about bringing the sailors home.

“That is my conclusion that I have come to. Because even if you negotiate with Disney and they said they would pay, if they are not sick, if they have followed the protocols, you received your medical clearance, you did your own check, the rapid tests they said is 97% accurate and it came back that all of them are negative, but, because Disney already put money into your hands, they can’t go home.

“The playing field wasn’t level today because the other sailors that came from those cruise ships followed that exact protocol and everybody who got the clearance from both the cruise line and from the ministry after using the rapid tests, they were sent home, assuming that they had the relevant facilities to quarantine,” the relative told iWitness News.

“I could hear this morning when I was speaking to my relative on the cruise line. From the time they hit Richmond, and they started to see land, the guys were so excited, they are looking forward to come home and meet their families and you put them in a hotel and they are not sick, only because you receive money from the cruise line.”

SVG has recorded 18 cases of COVID-19 since March 11. Only four of those cases remain active.