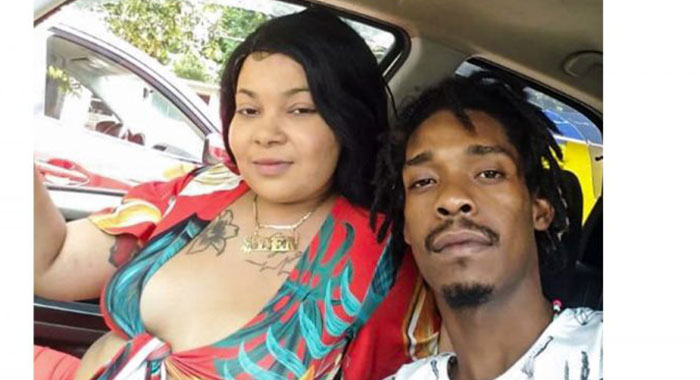 The Rockies man who survived a bullet to the head when he was shot multiple times in Kingstown on Nov. 5 last year and his girlfriend who witnessed the event and helped him after the shooting were both shot and killed in Arnos Vale Friday night.

Information about the shooting is not clear at this time, but iWitness News understands that police are looking into a report that a third person, said to be a security guard, was also shot and injured.

Corridon is known in social media circles for her aggressive posts that she had often used to defend her different boyfriends over the years, and attack their critics.

But this week, she might have been in a reflective mood, commenting, among other things about the fact that no one assisted her when George was shot in Kingstown last November.

In a post on Facebook around 3 p.m., Friday evening, she said: “You easy to dead when you friendly”.

On Thursday, she made a post saying that a week before George was shot last November, she had dreamt that the father of her child was shot in front of her and she had called George to help.

“… and a week after he [George] got shoot up 5 times and I was the one to help him when everybody watch him on the ground in all the blood I saved his life,” Corridon said. “the father was telling me something and I still went about so that’s why when people dream about me I tell them do not tell me because I does see things before it even happen I’m more careful now I’m wiser I wont make the same mistakes twice,” she further wrote in the Facebook post. (Read full post below)

Reports of the November 2019 shooting are that George and Corridon were unpacking clothes for sale in the area of C. Prescott & Sons Ltd. on Lower Middle Street, near the market square when a gunman — having walked the block from Gonsalves Liquors to where the shooting took place –approached George.

The gunman is said to have used an open umbrella in an attempt to conceal his identity before discharging several shots at George, one of which struck him to the head.

The assailant then fled the scene on foot, running along Bedford Street then onto Paul’s Avenue, taking the road alongside the corporate headquarters of VINLEC.

In the meantime, onlookers used their mobile devices to record images of George bleeding profusely before he was lifted into the back of a car, in Corridon’s arms and taken to hospital.

That same month, police charged Lejah “Soups” Alexander, 34, of Glen and Brighton with attempted murder in connection with the shooting.

Alexander is awaiting the legal proceedings in connection with that charge.

In November 2018, George himself was slapped with an attempted murder charge in connection with the shooting of fellow Rockies resident, Tevin Williams.

Williams, 22, survived a gunshot to the chest, but died on Sept. 8, 2019 after being shot in the face while hanging out under the Melville Street gallery of Ace Hardware.

Further, police had questioned George in connection with the Nov. 21, 2018 murder of Paul Over shopkeeper Sabitree Lyttle, who died after being shot at her home, where she also operated a shop.

The shooting took place during an apparent robbery.

While Gorge and two other persons were questioned in connection with Lyttle’s death, police only charged one of them, Jebarry Jackson, 20, of Campden Park, who also goes by the name Michael Richards.

Richards is currently the subject of a preliminary inquiry into Lyttle’s murder and could be made to answer to the charge, if the chief magistrate deems that a case has been made out against him.

16 replies on “K’town shooting survivor, girlfriend who helped him killed in Arnos Vale”