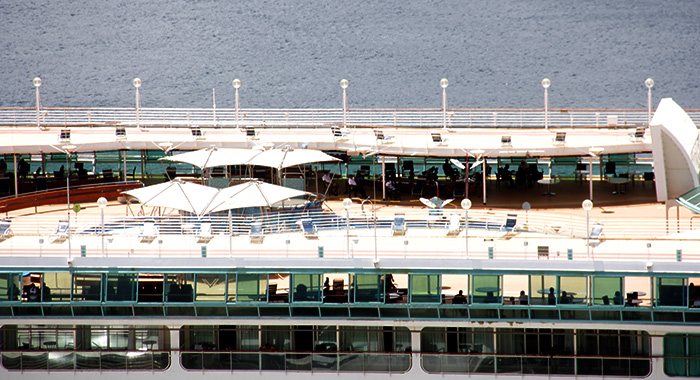 Sailors aboard the Royal Caribbean cruise ship in Kingstown on Tuesday. (iWN photo)

Prime Minister Ralph Gonsalves says his government is prepared to receive next week, rather than June 12, some 100 more Vincentian sailors who are aboard a cruise ship in Barbados.

The prime minister said on radio, on Wednesday, that he received a few days earlier information from Head of the Port Authority, Bishen John, that Royal Caribbean had contacted him saying that there were about 100 Vincentians in Barbados on different ships.

The cruise line indicated that those sailors could not have been repatriated on its vessel, Vision of the Seas, which docked in Kingstown on Tuesday with 356 Vincentian sailors.

The cruise line said that the Vincentians will be repatriated on June 12, Gonsalves said.

“So I don’t want anybody to feel that we are keeping our nationals there in Barbados. I just want to indicate that we are in a position that we could receive them. So it is not really so much so in our hands but in RCL hands,” the prime minister said, adding that he believes the cruise line would do its best.

As of Thursday evening, seven of the sailors who returned on Royal Caribbean this week had tested positive for COVID-19, bringing the total number of cases in SVG to 25.