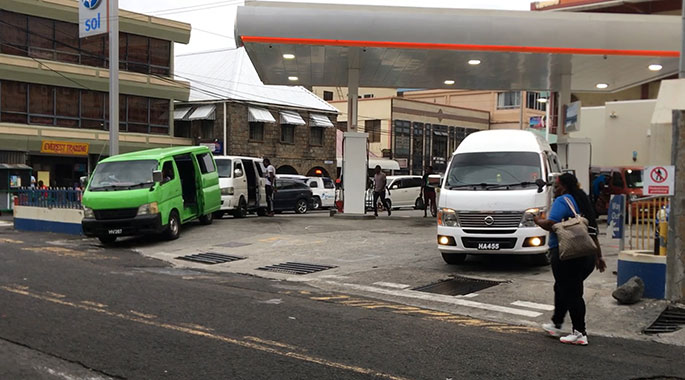 The owners of the service station in Kingstown that several vans were using as a bus terminal say such use is against their safety policy.

“A gas station could never be a designated area to be used as a bus stop and definitely I think we need to have the police involved to deal with this matter,” Steve Francis, general manager of SOL EC Ltd. told iWitness News on Wednesday.

Francis was commenting on an iWitness News video posted that day that showed several minivans using the Banfield Service Station in Kingstown as a bus terminal.

The executive said that his company thinks it’s time to involve, again, the police, they having helped with the traffic flow plan when the service station was redesigned two years ago.

“… and now we have a situation whereby people feel that they have a licence to do as they please, especially the van drivers and that has to stop,” said Francis, who also told iWitness News that the station is outfitted with powerful cameras and that videos of vans using it as  a bus terminal can be forwarded to the police.

Francis said that he had seen a situation before that caused him to wonder whether vans were using the service station as a bus stop.

“Not as many vans as I saw in your video,” he told iWitness News.

Francis added: “I saw a van once and I saw instances where people are driving through the station to get to Paul’s Avenue and, obviously, that is a serious concern to us; all the more reasons why we would have put in all those signage.

“But when I saw that video, in truth and in fact, that is very telling in terms of the number of vans that were in the gas station basically discharging and taking up passengers and that is contrary to our safety policy.”

Francis pointed out that a minivan is “nothing but a confined box” that could become a death trap if something untoward were to happen at a gas station.

“We don’t know what the passengers are doing in the vans. Are they using their cell phones? I hope they are not smoking but if a van is discharging or taking up passengers at any gas station, and at the same time vehicles are receiving fuel, all it takes is a little spark to mix with the fumes of that fuel to create an explosion.

“And, unfortunately, the result would be very catastrophic,” Francis said.

“And I can tell you that while gasoline is very flammable, LPG is even worse. So if you have a fire at any gas station that sells LPG, in particular, you can rest assured that there will be missiles being flung all over the place. That will be the results from the LPG bottles and this could be very far reaching.”

Francis said that St. Vincent and the Grenadines need to consider whether vans should be allowed to refuel with passengers aboard.

“This is something that I think we really need to address now. Because people are not paying heed to what happened two weeks ago in Union Island. It seems to me it means nothing to them. And I think it is time that people in this country become more safety conscious.”

He was referring to the explosion at a gas station in Union Island on May 19 that resulted in the death of three people.

He said there are signs at Banfield Service Station discouraging pedestrians from using it as a throughway.

“So people shouldn’t be loitering there as if it’s some kind of thoroughfare. They really need to desist from that.”

He said there was a similar problem at another service station a couple years ago and his company highlighted it to the dealers and eventually decided to pull out of that area.

“Banfield is in the heart of town … I know it is even more problematic because of its location. But the fact of the matter is [that] people have to be conscious about their safety. We have implemented all the safety standards that we are aware of in the petroleum industry to ensure that people are protected but it only takes one mishap for something to go wrong. So we really don’t want to encourage this kind of foolishness I am seeing there in terms of these vans going there and using it as a bus stop. It just should not happen,” Francis told iWitness News.

One reply on “Owners against using gas station as bus terminal”