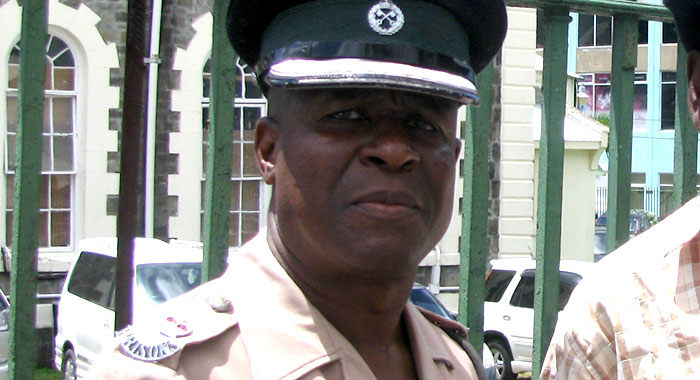 Chief Magistrate Rechanne Browne has told Superintendent of Prisons Brenton Charles that she would like the management of the prisons to attend court whenever there is a prison matter to be heard.

Browne said there are some strange things happening at the nation’s prisons.

Charles was in court on Tuesday as a witness in the case in which prison officer Louie Cupid, 45, is facing trial on corruption and conspiracy charges arising from the escape, between Sept. 30 and Oct. 1, 2019, of accused murderer, Veron Primus, 32.

The trial was adjourned to July 6.

The magistrate further said that she had observed a strange occurrence in court that morning, when prisoners were being brought in for their matters.

Browne further observed that two of the prisoners were handcuffed together and the other was walking by himself.

“I have never seen anything so crazy,” Browne said.

Generally prisoners would walk in front and the officer would follow them.

In response, the prison boss told the court that he would attend whenever there is a prison matter.

On May 25, a murder accused was sentenced to six months in prison for inducing into Her Majesty’s Prison one black Alcatel cellular phone and charger, both of which are prohibited articles.

Ulric Hanson is one of four men undergoing preliminary inquiry into the murder of Rodney George, a 50-year-old security guard of Victoria Village.

Hanson, along with suspended Police Constable Ettian Charles, of Arnos Vale, Glenville Harry, of Vermont, and Jerome Ollivierre, of Mayreau, are alleged to have murdered George by stabbing him about the body at Arnos Vale between Aug. 31 and Sept. 1, 2018

Hanson was returning to prison on May 6 after attending a hearing in the preliminary inquiry into that murder when prison wardens who conducted a search on him detected an object in the area of his chest.

Asked if he had anything to declare, Hanson removed the cellular phone from the inner pocket of one of two shirts that he was wearing.

The wardens found the charger in one of four boxer shorts that he was wearing.

Hanson had initially pleaded guilty before Senior Magistrate Rickie Burnett who recused himself and transferred the case to Calliaqua Magistrate Zoila Ellis Browne, who handed down the sentence.

In addition to the murder charge, Hanson and his co-accused are jointly charged that between Aug. 31 and Sept. 1, 2018 at Arnos Vale, they entered the GEC Auto Supplies as trespassers and stole EC$2,074 in cash, the property of Gevandean Wilson, proprietor of the business.

Charles, Hanson and Harry, along with Racquann Robinson, of Campden Park, and Elroy Rodgers, of New Montrose, are awaiting a preliminary inquiry into the Sept. 15, 2018 robbery of physician, Reisha Browne-Caesar, the wife of Minister of Agriculture Minister Saboto Caesar and sister of the Chief Magistrate.

The prosecution is alleging that the men used a gun to rob Browne-Caesar of items valued EC$10,350, and documents.