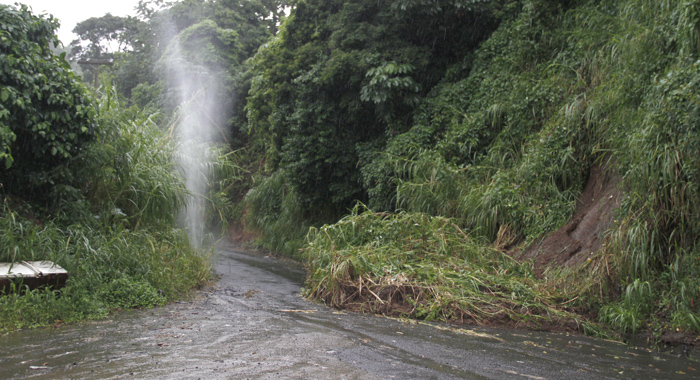 A landslides and a resulting broken pipe in La Croix in 2016. (IWN photo)

The Central Water and Sewerage Authority, like regional forecasters, have warned of the possibility of landslides when the rains return after a long period of drought.

Chief Executive Officer of the CWSA, Garth Saunders, told a recent press conference that the CWSA is encouraging consumers to immediately activate their hurricane preparedness plans.

“You are going to need water storage. The scientist, the engineers will tell you after a long drought, soil cohesion is less, it doesn’t stay together very much, you get cracks and when the rain comes, the water infiltrates these cracks and causes landslides and damage. So we expect a hurricane season to be affected by landslides and land slippages,” Saunders said.

He said that this also affects the CWSA.

“So we are explaining this to the public, ahead of time that once we have heavy rainfall, you can look forward to flooding and landslides. And our pipelines coming from the middle of the forest are very vulnerable. So we are going to have to try as much as possible to protect ourselves and prepare ourselves for disaster response because in many cases there is very little we can do with natural disasters and natural occurrences,” Saunders said.

In May, during its virtual Climate Outlook Forum, the Caribbean Institute of Metrology and Hydrology (CIMH) made a similar observation about the potential for landslides this wet season.

CIMH said June through August rainfall may be drier than usual in Belize and Trinidad and Tobago, with slightly fewer wet days than usual, but wetter than the usual in most other places, with a few more wet days, wet spells and more very wet spells than usual.

The implication is potentially faster recharge of water reservoirs related to an increase in wet spells and increasing flooding and landslide potential in the islands towards August.