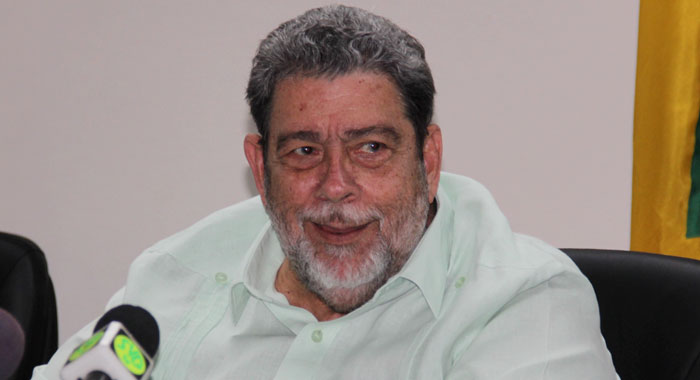 Prime Minister Ralph Gonsalves is listing himself among the five persons in St. Vincent and the Grenadines who, over the past 50 years, has done the most for the nation’s poor and marginalised.

“Now, if I may just dispense of this. I believe that if you go across St. Vincent and the Grenadines, persons who are alive and you want to select five persons over the last 40 years, 50 years, who have contributed immensely to helping the poor and working people of all classes, but particularly the poor, the working people, the marginalised, the dispossessed and also in the Caribbean, issues dealing with reparation and wider afield with Africa, I would say that if you put up one hand with five fingers and you’re looking for five persons, I think that most people in St. Vincent and the Grenadines would put Ralph name among that five,” he said on Sunday.

Gonsalves was responding to what some have termed a racist comment by Noel Dickson, a candidate for the New Democratic Party in the next general elections.

In a Facebook post, Dickson, who also represented the NDP in South Windward in the 2015 election, said:

“the Portuguese ruler in SVG has his bewitched knees on the back and neck of our blessed land and as a result, most of our people can’t breathe. As black people, the time has come for us to vehemently resist this in the next general elections”.

Speaking on radio on Wednesday, NDP president and Leader of the Opposition Godwin Friday distancing himself and his party from the comments, saying those are not sentiments that the party espouses.

“Is not the sort of comments that I encourage? I don’t bring race and appearance, everybody, we are all Vincentians. I don’t question people motive when they want to come into public life because I know what it takes to do it, irrespective of which side you are on. It really is difficult. And people do things that are bad policies, they may make statements that are wrong, they do things that are wrong and I focus on those aspects of it,” Friday said on Hot 97 FM on Wednesday.

He said that while it is entertaining sometimes to say certain things, “we have to keep it within the bounds”.

He however said that comments should not be magnified “into a mountain.

“It is a comment that is not in keeping with the One Vincy, the One Nation, which is what we are. We espouse that, not just in St. Vincent, but the world,” he said, adding that he would speak with Dickson and the party would discuss it in its caucus telling members “sometimes, we have to be more guarded in some of the comments we make because some people may misinterpret it…

“I always believe that people have good intentions, they are good-willed and sometimes, if we err, then I certainly would point it out,” Friday said, adding that he would have a discussion with Dickson about removing the post.

Speaking on WE FM on Sunday, Gonsalves said:

“It may be that Noel Dickson is unsophisticated and not sufficiently nimble that he misses what the mainstream NDP is doing and found himself out on a limb.”

The prime minister, however, said that the NDP also referenced George Floyd’s death in its weekly column last week and used the police officer knee as a metaphor for leadership in SVG.

“In St. Vincent and the Grenadines, the Unity Labour Party (ULP) regime has wrapped its tentacles around the necks of Vincentians forcing them to scream, ‘We can’t breathe’,” the NDP said in its column.

“Now, this is a government which has given the people of this country universal secondary education, which has expanded housing facilities in unprecedented terms, health facilities, infrastructure including the international airport in Argyle, and you can go on, which has lifted the living standards of the people, which has taken the right position on COVID-19 strategically, have a package of social consolidation, social safety net support and economic recovery and stimulus for all categories of persons, from persons who push cart right up to the farmers and fisherfolk and everybody in between.

“When you do something like this … in an opportunistic way, pull a slogan which, first of all, you are trivialising and demeaning the people’s resistance in the United States, that’s the first thing you are doing. The second thing, you are applying it in an entirely erroneous manner only for your opportunistic sake and leaving the institutional racist structures in the United States which give rise to the death through the action of a policemen of George Floyd and then you go further again in the case of Dickson by compounding it by saying the man who is running the enterprise which made people can’t breathe is a Potogee man name Ralph,” Gonsalves said, using the dialect word for “Portuguese”.

He, however, said that if he does not make it among the five persons over the last half-century who have done the most for poor and marginalised Vincentians, he would be in the top 10.

“And if you were to go to your hands and toes, my name certainly will be there and I don’t have to recount my own history of struggle in relation to some petit bourgeoisie types and who are stuffed with right wing ideological positions and who are really in the business for self-advancement rather than the interest of the people as a whole,” Gonsalves said.

The prime minister said he knows what he dedicated his life for and to, adding that what he is doing is not and has never been a part-time activity.

“Persons would say that because I spend so much time on it I love power. Well, if I love power so much and I was inclined to be totalitarian, why didn’t I lock down?” he said, referring to a national lockdown in response to the COVID-19 pandemic.

“Why didn’t I use draconian Chinese methods? Why didn’t I have state of emergency to take away people’s fundamental rights and freedoms, including the rights of habeas corpus? Why didn’t I impose curfew? And all of them were asking me to do so.”

Gonsalves said that there are structures in place for resolution where there is injustice.