Gov’t pushes thru $53m loan for new buildings amidst COVID 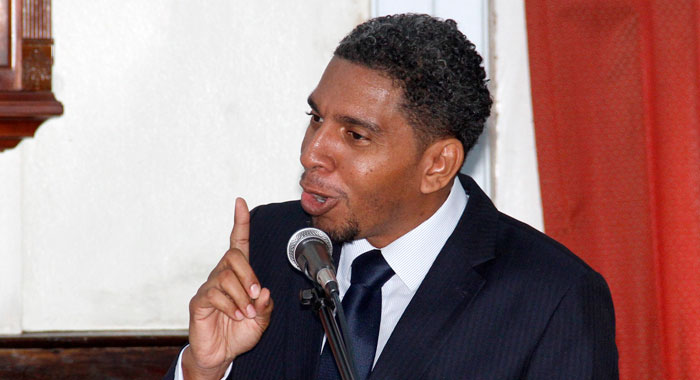 The United Labour Party administration, Monday night, pushed ahead with a US$20 million (EC$53 million) loan for the construction of a new Parliament and courthouse buildings even as the opposition withdrew its support, saying that doing so during the COVID-19 pandemic is wrong.

“We have to show that we appreciate the magnitude of the calamity that is confronting us as humanity and sometimes that requires us to make adjustment about things that though desirable, we can put off,” Opposition Leader Godwin Friday told Parliament.

“And I do think that a new Parliament building may look very nice, might be comfortable for us here, but we run the risk of sending out there the perception, now we’re ‘niceing’ up ourselves while people are struggling,” he told the debate on the Modern Parliament and Modern Court House Projects (Loan Authorisation) Bill, 2020

“We need to set our priorities right. More importantly, we need to send the right message to our people: that we will put the money where the pain is; that we’ll make sure that we ride through this together, that we understand the nature of the calamity that we’re confronting, we will order priorities accordingly and we’ll get through it,” Friday said.

“And then we will have a nice Parliament building and a nice courthouse building so that they can come and watch their representatives in the Parliament. And when they have to have a matter to go to the court don’t have to run down the road to find the washroom. They will appreciate that,” he told lawmakers.

However, Minister of Finance Camillo Gonsalves, in wrapping up the debate, said that the authorities have had to remove “all manner of filth from this building to enable people to come in here and function.

He said that while Friday had noted the COVID-19 pandemic saying that the time is not right for construction of the building, the Bible says, “‘He that observeth the wind will never sow and he that had regarded the cloud never reap.’

“If you wait for perfect weather, you’ll never do anything. You never sow a single seed. And if you keep watching every cloud, you will never harvest. That is what we heard today from the honourable Leader of the Opposition,” Gonsalves said.

In presenting the bill, the finance minister noted that the construction of the buildings, near the National Library in Beachmont, was included in the Budget that Parliament approved in February.

He said that the US$20 million loan from Taiwan will be for a term of 20 years with three years’ grace and the interest rate will be 1.2% plus the six months … the London Interbank Offered Rate (LIBOR).

However, the opposition leader, in response, said that he supported the project when it was proposed and sat in committee meetings that looked at the preliminary designs and discussed what ought to be done.

“And we have here a building which we all know has its challenges and we have aspirations of moving elsewhere. Mr. Speaker, you know the challenge of taking on US$20 million dollars loan even though it is 1.6% interest at this time is rather daunting,” Friday, however said.

He noted that the loan still has to be repaid.

“I know this matter was debated during the budget debate. It was presented there. And it may seem that it has been exhausted. But a lot has changed since then. The world has turned upside down since then. In St. Vincent and the Grenadines, we have to adjust our priorities. We know that because it’s not just a temporary or intellectual exercise. It hits us in the face every day,” the opposition leader said.

He said that desirable as these two projects are, “it may not be the right time to embark on them now”.

Friday noted that Camillo had said earlier during the meeting of Parliament that government revenue in May was down 18%, compared to 2019.

“I believe that the stimulus support measures for people who are, quite frankly, struggling to make ends meet, will have to be increased,” he said, adding that there is great uncertainty ahead.

“We don’t know how long this crisis will persist. We don’t know how much worse it’s going to get. Sometimes, I don’t want to watch the news. The people who are informed and say that they understand what’s to come when they speak, it makes one wonder how we will manage going forward; where are the resources to do it?

“But most of all, I think what it does is it says to me that we have to get our priorities right, we have to adjust them, we have to readjust them, if only for a time. While we cope with what is an unprecedented crisis, not just for St. Vincent but for the world.”

Friday said that the government cannot assume that it is business as usual.

“We can’t have that characterise the nature of this honourable house,” he said, adding that a new Parliament building was and is a great idea.

“But I do think the timing requires us to reconsider that now. You don’t buy a new car when you just lost your job. When you’re confronted with hard choices, you have to give up certain things. And this can be delayed.”

The opposition leader said he does not mind sitting in the current Parliament building for another year or two and discussing matters that are intended to benefit all people.

“Do you want to get some comfortable chairs? I’ll accept that. That’s a trade-off. I think people will understand that. And maybe get the AC units working again. But I really do have a serious issue with the timing now, of these two major projects that will cost us over $53 million.”

The opposition leader said that the two new buildings are not productive assets.

“Let’s not kid ourselves. A Parliament building doesn’t create a single exportable commodity and [the] same with the courthouse. It will be more comfortable for lawyers… I am a lawyer; I’m a Parliamentarian. In a sense it will benefit me in both ways because it would be more comfortable surroundings.

“But I can’t sit in a nice leather chair in comfortable, air-conditioned offices and hallways and know that the people, or at least the prospect of it … are facing such grave uncertainty. I see it every day. This is not a joke thing. This is not going away anytime soon.

“The kinds of things that people come to us for assistance, I know it’s only going to get worse. And what is now a need to put bread and food on the table. And people try to stay calm in another month or two, in four or five months, becomes a cry of desperation. And we have to be in a position to respond to that, which means that whatever resources we have should really be focused on helping us to get through this crisis.

“I understand you’ll say, OK you are building a Parliament building, you’re creating construction work, and so on. That’s longer term. I don’t think people are going to appreciate the importance or see the relative importance of these projects, borrowing $53 million to build a new Parliament building and a new courthouse when we don’t know how we’re going to get through the next six months,” Friday said.