Vincies ‘not suffering that much’ because of pandemic — Sir Louis 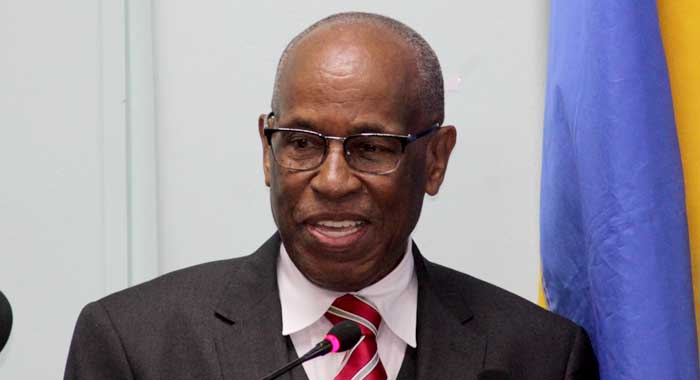 While unemployment has risen 10 percentage points since March, government revenue fell 18% in May, compared to 2019 and 3,164 persons have filed for state assistance amidst COVID-19, Deputy Prime Minister Sir Louis Straker says Vincentians “are not suffering that much” because of the pandemic.

The Central Leeward MP made the assertion, on Monday, as he argued in support of the government borrowing EC$53 million to build new parliament and courthouse buildings.

“Build a new parliament! Let’s take pride in where we are meeting. By the time — you’re making it appear that we must either decide on Corona or termites. This building is so termite-ridden,” Sir Louis told the debate.

“True we have some unemployment. But this government has several programmes in place that we would be able to help those who are poor, those who are needy, we are helping them; we are spending millions of dollars,” said Sir Louis, who is also Minister of Foreign Affairs.

Sir Louis’ comments came on a day when Minister of Finance Camillo Gonsalves told Parliament that the government has paid EC$1.02 million — or EC$300 million per month each — to a total of 1,496 Vincentians affected by closures in the hospitality sector.

An additional 1,100 Vincentians have received a similar $300 per month via the unemployment benefit offered by the National Insurance Services.

And, 2,437 borrowers have the moratorium on loans totalling $303 million even as 1,520 Central Water and Sewerage Authority customers over the last three months would have been disconnected were it not for a moratorium on their bill payment.

The US$20 million spending for the two new buildings was approved in the budget that lawmakers passed in February, before the impact of the COVID-19 pandemic, one month later.

However, Opposition Leader Godwin Friday argued on Monday that the projects should be delayed, lest lawmakers “run the risk of sending out there the perception, now we’re ‘niceing’ up ourselves while people are struggling”.

However, Sir Louis, who returned to politics in 2015, five years after announcing his retirement after representing Central Leeward from 1994 to 2010, argued strongly for the construction of the buildings.

“This building is old and tired,” he said of the 200-year-old building that houses the parliament and the High Court.

“And everybody look forward to the day when we would have our own parliament. Everybody refers to it as ‘we are meeting at the courthouse’. If we keep putting it off and putting it off, next year would come with new challenges and new expenditures.”

Sir Louis also responded to the opposition leader’s suggestion that construction be delayed for a year or two.

“So if we say let’s wait for a year or two, when a year or two comes, who knows you might have a major hurricane that we say no, we have to spend the money to rebuild.”

Construction of the buildings is to be financed by a US$20 million loan from Taiwan for a term of 20 years with three years’ grace and an interest rate of 1.2% plus the six months London Interbank Offered Rate.

Sir Louis said that SVG has been graduated to a middle-income economy and cannot get concessionary financing.

“Here we have a friendly government that would give us concessionary loans of less than 2% that we should grab and move forward and do what we have to do.

“So let us not get by with the idea that we don’t know what we would feed our children with next year. And things are tough now, and this is our priority, just feed the children. We can do two things at one time. We can move forward and build a modern Parliament and I’m sure when members of the Opposition are sitting in it, they might not even think that they voted against the bill,” Sir Louis said.

The government used its majority to approve the borrowing without the support of the opposition.