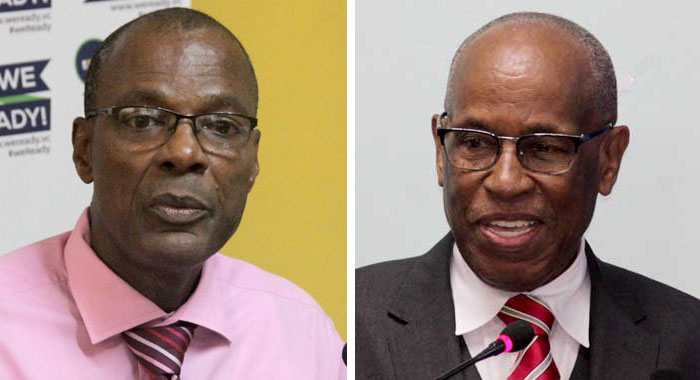 An opposition lawmaker says Deputy Prime Minister Sir Louis Straker’s claim that Vincentians “are not suffering that much” because of the coronavirus pandemic shows that the government is out of touch with the masses.

Daniel Cummings, who is Member of Parliament for West Kingstown, described the Unity Labour Party (ULP) administration as “people who have been in power today for so long that they cannot begin to see or feel what it’s like before; they have no inkling of what it is to be without a job”.

He was speaking on his New Democratic Party’s (NDP) radio programme on Tuesday, one day after Straker made his assertion in Parliament.

“There’s a gentleman called Louis Straker. I want to be cautious, and … because he is an elderly person, I would want to be kind. But these statements reflect a level of lack of understanding, a level of contempt for the people, a level of self-gratification, a level of false importance,” said Cummings, who is also chair of the NDP.

“It is a frightening thing because in all of his comments you hear one theme coming out: we are going to build this Parliament building. This must be a monument to the legacy of the red man. This must be another ULP flagship project,” Cummings said.

Speaking in support of an EC$53 million loan for a new parliament building, a hall of justice and two temporary buildings to house the court and national assembly in the interim, Straker said:

“Build a new Parliament! …  How long are we going to sit here? … our people are not suffering that much because of, of Corona. True we have some unemployment. But this government has several programmes in place that we would be able to help those who are poor, those who are needy; we are helping them; we are spending millions of dollars”.

But Cummings said that since coming to office in March 2001, the ULP administration ignored the upkeep of the current Parliament building — which is 200 years old.

“The old prison behind it. They complain when they were in opposition about how it would be broken down and built over. Go and see the conditions under which people exist in the prison behind there now.

There are so many things to be done in this country. The roads are in a mess. There is no employment created by any of the projects that you’re spending millions on,” Cummings said.

“… when people live in a family situation where the state pays for their residence, pays every bill, pays 10 to 12 security guards permanently to be stationed to protect the entire family and friends, in-laws included, when the electricity bill to that compound comes to over $5,000 a month and lights are left on almost 24/7, when they are purchasing the most expensive vehicles every Monday morning like they’re going out of style; when the family members are given the most prestigious jobs here and around the world, when their in-laws and their connections hold the most prestigious jobs here in St. Vincent and the Grenadines and around the world, they have lost sense of all reason of what it is to struggle, to compete in order to survive.”

“And that is why people who spend more time overseas gallivanting and enjoying life even though they say they are elected representatives, that is why they have the feeling that the coronavirus not causing anybody to suffer in this country.”

Cummings said that when visiting his consistency the joblessness as a result of COVID-19 is obvious.

“… there was a time when you would want to go into your constituency after five o’clock going on and six o’clock. Now you can go now in the morning, you can go midday and you can go in the evening, everybody is at home. Nobody has any work to do. Wherever you’re in the constituency, you are meeting people at home, throughout. Unemployment has never been as high as it is.”

Cummings said people are suffering even with the EC$300 in income support that the government is giving to certain categories of persons as a result of the pandemic.

“It cannot begin to pay utility bills much more to put food on the table. Yet, yet those who have been fattened by the state, whose allowances for entertainment alone is substantially more than what a family gets in three months; entertainment allowance alone.

Cummings said Straker’s comments demonstrated “beyond the shadow of a doubt” that it is a time for a change of administration.

“They must go. No matter what your politics is, when you look at what is happening in this country, you don’t need anybody to tell you that this is unacceptable. You don’t need any help. You just have to watch Straker’s actions and listen to the assurances.

“And you know, that he is fed so much from the fatted calf that he has now approached the cuckoo land. He does not understand anything about the people of this country,” Cummings said.