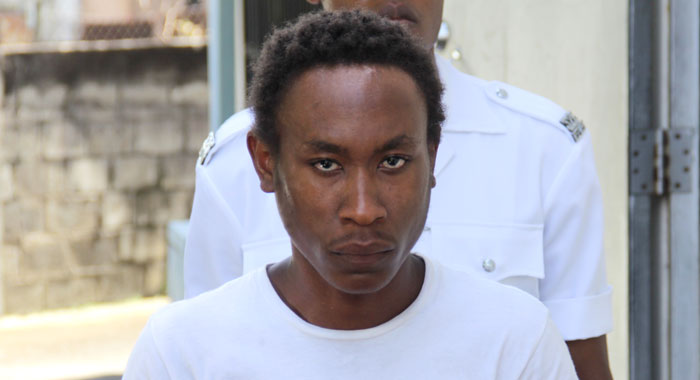 A repeat thief, who stole an iPhone from a Kingstown store, locked the clerk inside then gave her the finger from outside, will spend the next six months in jail.

Isaiah King’s pleas that he could not take another jail term fell on deaf ears at the Kingstown Magistrate’s Court on Monday.

The 23-year-old Lower Questelles man was in court a mere eight months after being jailed last October for stealing a bottle of Hennessey from a Kingstown supermarket, his second theft that month.

On Monday, he pleaded guilty to a charge that on June 20, at Bay Street, Kingstown, he stole one black iPhone 7 Plus, valued at EC$1,549, the property of A&A Electronics.

King asked the store owner to have sympathy on him, saying he had committed the crime because of “sufferation”.

The complainant accepted the apology but said that his business would still be in jeopardy.

“I leave it in the hand of the court,” the complainant said.

Senior Magistrate Rickie Burnett appeared to agree, comment that King was not unlikely to change.

“Why would I strike lightning the same place twice?” said King, whose previous convictions have been for stealing from different business places in Kingstown.

King’s comment triggered laughter in the court, which an orderly quickly quelled with a brisk “order in court!”

“When you speak, I pay attention to the words. ‘Strike?’ Based on how this crime was committed, six months is the appropriate sentence.”

The facts of the case, as presented by prosecutor Police Constable Corlene Samuel, are that a female technician surnamed Andrews was at the store, located on the first floor of the Sprotts Plaza, around 8:50 a.m. attending to a customer when she noticed King sitting on the steps outside.

After the customer left, King entered the store carrying a jukebox and asked Andrews if they repair damaged charging ports.

He gave his name as Karim Weekes, and was given an EC$70 quotation for the repair.

King then asked Andrews to allow him to check out the iPhone.

When it was handed to him, he walked out the store with the mobile device, leaving the jukebox behind, used a piece of stick to jam the door from outside, preventing Andrews from exiting and stuck up his middle finger at her.

The police were called in and the store CCTV footage was reviewed, revealing King, who was known to police.

Police executed a search at King’s home, which turned up nothing, but he gave police information and the phone was recovered from another person.

King admitted to the court that he had planned the theft and that he had been sitting outside the store waiting from an opportunity when only the clerk was inside to execute his plan.

The man told the court that he was unemployed and when he works, he is a labourer.

Burnett noted King’s criminal record. He entered the criminal justice system at age 15, and at age 16, he was convicted on a charge of burglary, when he stole EC$25,000 worth of items from Digiworld #2.

The magistrate also noted the October 2019 conviction for theft, and one from September of that same year, when King shoplifted from Jax Enterprises.

King asked the owner of the store, who was present for the hearing to have sympathy on him.

“I know is a wrong this I did but please have some sympathy on me. Put me on a li’l bond. Ah doh wah go back jail please,” King said partly to the complainant and the magistrate.

But Burnett told King that even the time of day that he visited the store was part of his plan.

“You went very early when the business place just open… What do you do with minds like these?”

King then asked the magistrate to help him to get a job, saying all of his relatives are overseas and they don’t pay him any mind.

The defendant said that when things are hard, he resorts to theft.

The magistrate responded: “When things are hard, you rob people as well?”

“I would never take up a gun,” King said.

The prosecutor told the court that King was showing remorse because he had been caught, but noted that he had stuck up his middle finger at the store clerk.

“They do these things but when they come to court, they appear to be ‘Gentle Jesus, meek and mild…” the magistrate said and recited parts of the children’s prayer.

King said he would not have committed the crime had he been employed.

“Every time you’re unemployed, you’re going to do it?” the magistrate responded, adding that King was likely to be unemployed for a while because he had nothing that would help to make him to be gainfully employed.