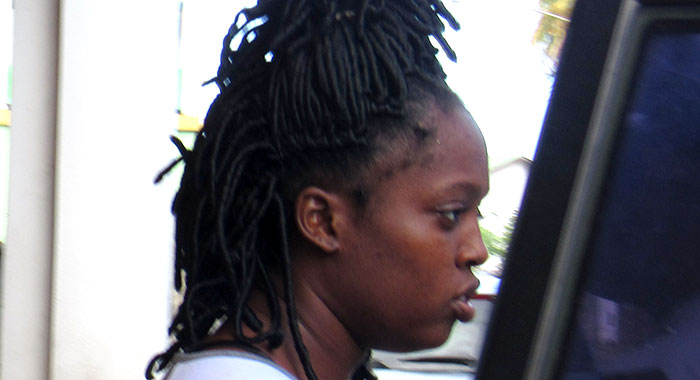 Jonelle Joseph on her way to prison. (iWN photo)

A 24-year-old Colonarie woman has been jailed for 12 months after following through on her threat to wound her children’s relatives.

Magistrate Bertie Pompey handed down the sentence on Jonelle Joseph, who had wounded Desmond Dublin, the uncle of her children, aged 6 and 4.

The Georgetown Magistrate’s Court heard recently that on March 7, at Colonarie, a truck driver told Joseph, apparently jokingly, “Give me some money out of that purse dey nuh?”

Joseph responded: “Is nah money mi get in the purse ah nuh. Is a knife to stab up them p**sy dey.”

Dublin, who was sitting nearby, asked Joseph, “Ah who you ah talk to?”

Both Joseph and Dublin had an argument during which Dublin picked up a stick and approached Joseph, but dropped it and proceeded empty-handed.

Joseph took a knife from the purse and cut Dublin on the face and left hand.

Before handing down his sentence, Pompey asked Dublin about his injuries.

Dublin, whose right eye looked disfigured, replied, “I developed a cataract and if I do not have on my glasses, my eye run water”

Asked why she should not be jailed for her crime, Joseph remained mum.

On further questioning regarding compensation of the defendant, Joseph said she lives with her mother, having left school at Form 3 after she became pregnant.

Pompey told the defendant: “You can’t pay compensation, so you will have to pay punishment.  You contemplated it [the act]; you expressed your intention to hurt members of the [virtual complainant’s] family.  I can’t let you go like that!”

The magistrate asked again: “Tell me, why I must not send you to prison?”

Joseph responded: “Because of my two children.”

In handing down the sentence, Pompey noted the four aims of sentencing — prevention, deterrence, retribution and rehabilitation.

He said that mitigating on Joseph’s behalf was the fact that she had no previous conviction, is 24 years old, and has two children.

He, however, said that Joseph showed no remorse and was “grinning” throughout the trial.

Pompey further said Joseph carried a knife in her bag and said she was going to inflict wounds upon Dublin or members of his family.

Pausing briefly, the magistrate commented, “The injury is serious.”

The four days that Joseph spent in custody was subtracted from her 12-month sentence.

One reply on “Woman jailed for wounding children’s uncle”