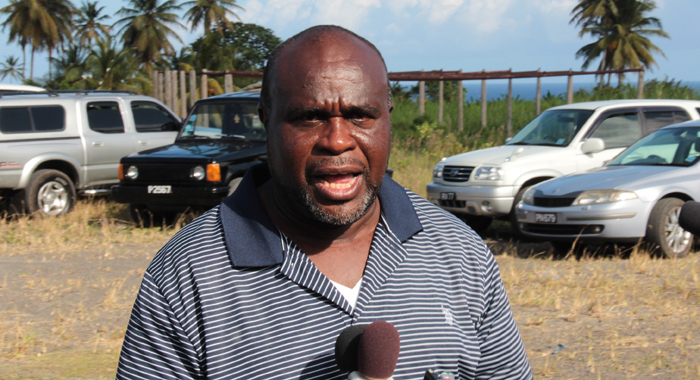 Bigger Cement and Aggregate Inc., a company owned by businessman Leon “Bigger Bigs” Samuel, has won an initial victory in his legal battle to have the court declare that there are no Crown lands in Rabacca, close to where the company owns land that the government surveyed in March 2019.

Samuel had placed a 40-foot shipping container at the entrance to the property in an effort to prevent government surveyors from entering on it, and was arrested and charged as a result.

He has since filed a lawsuit, asking, among other things, that the court declare that the survey was not performed in accordance with the Crown Lands Act and was consequently illegal and/or irrational and/or unreasonable and/or unfair and/or an abuse of power and accordingly unlawful and void from the beginning.

Samuel also wants the court to declare that all of the 3.5450 acres of land nearest Rabacca River and 5.4321 acres nearest to the Lady Jane/Langley Park Dry River as shown on a survey plan or diagram prepared by Aldrick Williams, a licensed land surveyor, and approved by the Land and Surveys Department on April 30, 2019 are lands beneficially owned by Samuel.

“From the outset, we have always challenged that process on the basis that the only way, the only basis on which that action would have been taken, is if there were Crown lands present there,” Counsel Akin John, one of Samuel’s lawyers told a press conference in Kingstown on Wednesday after the court ruling.

“There are no Crown lands as far as Mr. Samuel is concerned. And we have advised him accordingly. Arising out of that, the Crown Lands Act makes provisions to challenge the survey that comes out of that survey process.

“And we dutifully took the necessary action in commencing legal proceedings to begin with, on the basis that, in fact, there was no basis for invoking the Crown Lands Act, and as Counsel Thomas said, seeking redress for Mr. Samuel’s constitutional rights,” John said.

The respondent in the case is the Governor General, represented by the Attorney General of St. Vincent and the Grenadines.

The respondents asked the court to strike out the claim, an application that the court rejected in a ruling on Wednesday.

Thomas said that the respondents had claimed that the court had no jurisdiction to hear the case.

“The Court made light work of that, and clearly declared that it had jurisdiction to hear the claim,” Thomas said.

“In the claim, Mr. Samuel is asserting that the entry of state officials onto his land was arbitrary, it was a curtailment of his rights, his due process rights, it was contrary to certain sections of the Vincentian constitution, and that it amounted to an abuse of process,” Thomas said.

He, however, said that those matters are yet to be heard.

“But the important victory which Mr. Bigger Bigs — Leon Samuel won today is that he was able to get the court to vindicate his right to hear this very important matter in a court of justice in Kingstown, St. Vincent and the Grenadines. And we are elated for that decision by Justice Esco Henry and we look forward to litigating this matter on behalf of Leon ‘Bigger Bigs’ Samuel,” Thomas further told the media.

One of the issues at play is the access to farmland at Bower, located north of Samuel’s property, which farmers had traversed after the public road collapsed.

However, Samuel, years ago, discontinued that access, after the government had ordered him to cease mining aggregates on the lands in 2011.

The discontinuation of the access led to contention between Samuel and farmers, some of whom allegedly assaulted him during a confrontation about eight years ago.

At the press conference, John played a recording in which Minister of Works, Senator Julian Francis, speaking on radio on or about Nov. 5, 2019, had said that the state had not confiscated Samuel’s lands as he had alleged on social media.

“There is absolutely no confiscation of Mr. Samuel’s land. Whatever he paid for is there in black and white, in print … marks around it and the Crown land that sits on both sides of Mr. Samuel’s land that is between his boundary on the northern side and the Rabacca River and between his boundary on the southern side and the Langley Park River,” Francis had said.

He said that with the survey of March 2019, “it is now clear that the government does not have to go through any of Mr. Samuel’s land to give you access to Bower”.

The works minister said that his ministry intended to cut a road “on government crown lands” in the area to allow access to Bower.

But Samuel in contenting that there are not Crown lands in the area and the lands on which the government intends to place the road are, in fact, his company’s.

In the recording, Francis had also read a letter from the chief surveyor to Samuel, indicating the timeframe in which Samuel could contest the findings of the survey.

John told the media this was pivotal “in relation to the procedure that he has set or referred to, by which Mr. Samuel, if aggrieved by the state decision to conduct the survey process may challenge that or seek a review”.

John noted that the Chief Surveyor had written on Oct. 30, 2019 to Samuel, in his capacity as manager of the company, indicating that if Mr. Samuel intended to challenge the survey, he had two months from the date of that letter to do so.

“That will take the period to the 30th of December,” John noted.

He further pointed out that the works minister said he had consulted with the Attorney General who told him that Samuel would be given two months from the date of the letter — Oct. 30 — to contest the findings of the survey.

John said that this was done “well within the two month period”.

“So one could imagine the absolute shock and dismay and disbelief when on the 15th of January 2020, Mr. Samuel is served with an application on behalf of the Governor General, represented by the Attorney General — because those are the proper parties against whom this claim was brought– … to, among others, strike out Mr. Samuel’s or Bigger Cement and Aggregate Incorporated’s claim on the premise that it was brought out of time; that it should have been brought at some earlier date.”

“What the Attorney General’s Office attempted to do is to take a procedural point in having that claim prematurely struck out on the premise that when Mr. Samuel brought the action, he was out of time in doing so, he should have brought it at an earlier date.

“But in Mr. Francis’ statements on the radio, he indicated that between himself and the Attorney General, in consultation, they considered that factor. And they determined that the date on which they wrote the letter to Mr. Samuel indicating that he had two months from that date to file the claim, notwithstanding the provisions under the Act, which they suggest, is a basis for saying he should have filed that claim at an earlier date.

“Having made that representation, Mr. Samuel, having relied on that representation, filed his claim within the time. They then attempt to take this procedural point in having the claim prematurely struck out. That cannot, indeed, be fair and justifiable and we are pleased that the court found in Mr. Samuel’s favour in allowing him to proceed.”

John said that on Wednesday, Justice Henry, in an oral ruling, declared the court has jurisdiction to hear the claim.

The Governor General’s application to strike out Samuel’s claim was dismissed and the court allowed Bigger Cement’s application to amend its fixed date claim form, which must be filed by July 9.

Further, the court granted the Governor General an extension of time — to July 23, 2022 — to file her defence.

Further, the court ordered the Governor General to pay to Bigger Cement and Aggregating Inc. costs to be assessed if not agreed on application to be filed and served on or before July 28.

The lawyers, however, noted that the matter is not yet completed.