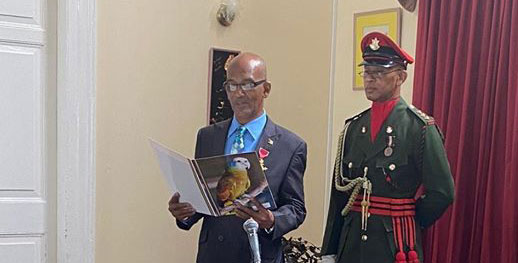 Godfred Pompey takes his oaths as head of the Constituency Boundaries Commission at Government House on Friday. (Photo: NBC Radio/Facebook)

Dame Susan appointed Pompey, acting in her own deliberate judgment pursuant to Section 32 (1) (a) of the Constitution of St. Vincent and the Grenadines, a release from Government House said on Friday.

The head of state also appointed Stephen Williams a member of the commission, acting in accordance with the advice of Prime Minister Ralph Gonsalves.

She further appointed Etson Cummings as a member, acting in accordance with the advice of the Leader of the Opposition Godwin Friday.

The commission was appointed on June 23.

The Constitution says a Constituency Boundaries Commission shall be appointed in the following circumstances:

a. whenever a census of the population of St. Vincent and the Grenadines has been held in pursuance of any law;

b. whenever Parliament has altered the number of the constituencies into which the country is divided; or

c. On the expiry of eight years after the commission last reviewed the boundaries of the constituencies…