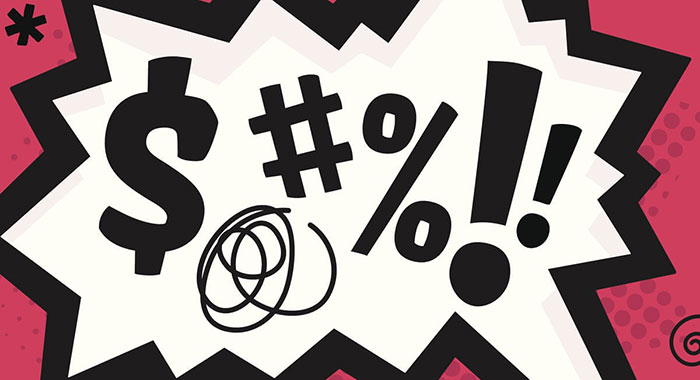 The issue of the alleged prolific use of swear words by police officers, some of whom charge civilians for using indecent language came into focus at the Kingstown Magistrate’s Court on Monday.

The topic featured in the case in which Osika Davy, of Spring Village was charged with using indecent language in a van in which an off duty police officer was also a passenger.

And, as a lawyer who was at the bar table but not involved in the matter intervened, the court heard of an expletives-laced post that a junior police officer allegedly made on WhatsApp that resulted in a similar tirade from a senior officer in a closed door meeting in which he reprimanded her for her post.

A recording of the alleged exchange involving the police officers has been circulated on social media.

In Monday’s case, Davy, of Spring Village, told the court that while she had sworn in the minibus, she had not used the word that the police alleged in their charge.

She pleaded guilty to a charge that on the same date, she damaged a hasp and staple, valued at EC$10, the property of the Government of St. Vincent and the Grenadines.

The defendant told the court that she and her boyfriend were in the van when they got into an argument over how he was holding her child’s birthday cake.

The woman told the court that she “did buss a bad wud” telling her boyfriend that if it were his child’s cake, he would have held it better.

Davy said that someone told her that a police officer was in the van and she responded, telling them why they were telling her about police and whether the police were God.

She, however, denied using indecent language then.

Defence Counsel, Vynnette Frederick, who was at the bar table, but was not involved in the case rose and told the court that is it strange that police are still charging people with indecent language.

The lawyer said that no one is “more prolific in using bad wud” than police officers.

“Sometimes, a bad wud is necessary sometimes, if you could express yourself with bad word because it could prevent a crime,” the lawyer said.

“And, the fact that the police is not — bad word God — is a fact. Why should police be offended? It’s harsh to legislate bad word. I don’t really curse; I am not skilled; but sometimes a bad word is necessary,” she said.

However, prosecutor Police Constable Corlene Samuel rose and reminded the court that the police do not make the law.

“They are enforcing the law,” she said, adding, “What one or two police officer say doesn’t change the law.”

Samuel said that the Crown was accepting the guilty plea on the damage to property charge and would proceed against Davy on the indecent language charge on another day.

But Frederick acknowledged that it is the duty of the police to enforce the law and told the court of the allegation of the exchange between the junior officer and her superiors.

She further read the post that the junior is alleged to have made on WhatsApp that trigger the alleged response by a superior officer.

“Some people does feel people are robots so tell me since yesterday morning at 4 am my eyes open I have not closed my eyes till 1 hour ago now these people callin me bout work and work. f**k am not a robot let me rest my f**king body.Is beat I came from I work station orderly with my f**king eyes open from 6 to 6.Country patrol 11 till after 2 pm. Bout learn and learn f**k all of you.I’m not a sleeper alyo know who the f**k alyo can pull rank on bout sleep and sleep.F**k off”

Frederick said “if there is any truth, at a minimum, this is publication of language that is similar content, similar words”.

She added that Davy was in court charged for using indecent language and was being told to return to court for trial, with the prosecutor saying that the police are going about their job.

The lawyer said “the issue is about generally applying the law equally across the board to all members in the society”.

She said that the allegation is that police officers also use the same language, adding that it is really unfair to say that the law is on the book, but is not being applied equally.

“You go after some and not others. I just have to say,” she said, adding that the matter of the WhatsApp post is in the public domain and, therefore, she raised it.

“The public is watching… It leaves a bad taste in my mouth,” Frederick said.

The magistrate said that based on what the defendant had said, he has to enter a not guilty plea for her on the indecent language charge.

Burnett, however, said that Davy seems frustrated that she had to return to court another day for trial.

The prosecutor said she was accepting the pleas and would have discussion with her superior at the Office of the Director of Public Prosecution.

In response to Frederick, the prosecutor said that the Crown deals with each matter on its own merit.

“And we have to choose place and time to deal with certain things. And we are dealing with a matter where the defendant made use of indecent language in a public place.”

Samuel said regardless of whether one or two police officers run afoul of the law does not change the fact that the defendant might have done something wrong.

“If a police officer kills somebody, does that give the right to somebody else to go and kill somebody else? No your honour,” the prosecutor said, raising her voice slightly.

“Your honour, it is not the time or place for that,” Samuel said in reference to Frederick’s intervention.

The magistrate said he did not want to put the prosecutor on the spot, adding that he was hoping that senior prosecutor Adolphus Delplesche was in the courtroom.

Delplesche, who prosecutes at the Serious Offences Court, located on the first floor of the same building, was at the Kingstown Magistrate’s Court earlier, waiting to represent the Crown in a preliminary inquiry.

However, he was not in the courtroom when Davy’s matter was called.

When Delplesche arrived, he reviewed the case file then magistrate also asked the defendant to tell the court what transpired in the van.

The woman went on to tell the court that it was not the first time that she had had a run in with that police officer.

“This police officer does meet me and just exercise he authority on me. Because he did me that one time already,” she said, adding that the officer had detained her once and his colleague had to discharge her.

Burnett noted that that allegation was new to the court.

“We are now hearing this part,” the magistrate said, noting that Davy had attempted to say something earlier and he stopped her.

The matter was adjourned to July 28 for trial. The court allowed station bail to continue.