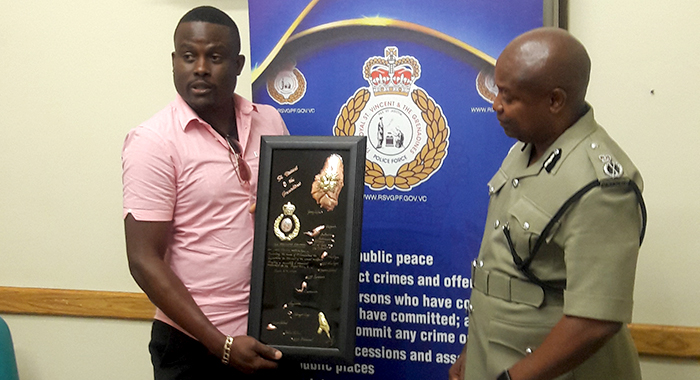 The Royal St. Vincent and the Grenadines Police Force (RSVGPF), under the auspices of Prime Minister and Minister of National Security Ralph Gonsalves, handed over a plaque to the Melisizwe Brothers via Zoom Live in recognition of the group’s contribution in the area of music.

The plaque was in appreciation of the group’s donationd a quantity of musical instruments to the Police Band and for promoting the name of St. Vincent and the Grenadines (SVG) on the global stage.

In a handover ceremony held at Police Headquarters on Monday, Commissioner of Police Colin John handed over the plaque to Mark James, father of the Melisizwe Brothers.

John said the Melisizwe Bothers has impacted positively on the RSVGPF and SVG as a whole.

He thanked the brothers for their generous contribution of the musical instruments donated to the RSVGPF on June 8. He further stated that the instruments would play a pivotal role in the development of the Police Band at this moment and in the future.

John said the instruments were donated at the right time because the Police Band will be launching its 2020 Apprentice Programme today, July 1, and the same instruments would be used to teach the participants.

He further encouraged the brothers to stay focused.

Meanwhile, James in accepting the plaque on his sons’ behalf, expressed sincere gratitude on behalf of the boys and his entire family.

He said the smiles on his sons’ faces illustrate their passion and appreciation of the plaque.

He outlined that he was more than happy to partner with the Police Band and the Police Force as a whole to promote future ventures.

He thanked the commissioner and the Police Force for recognising his “boys” and articulated that the plaque is well received.

The Melisizwe Brothers, who witnessed the ceremony via Zoom Live, thanked John and the Police Force for the efforts made to connect the presentation of the plaque live, which they said meant a lot to them.

They stated that the collaboration with RSVGPF enables the group to reach many youths throughout St. Vincent and the Grenadines.

Speaking on the “Gold-mind” initiative which they have created, the Brothers outlined that their main focus is to collect musical instruments to donate to young people and organisations all over the world that have an interest in developing youths through music.

The plaque was designed and created by Vincentian craftsman Rowland “Scrappie” Dopwell and crew.