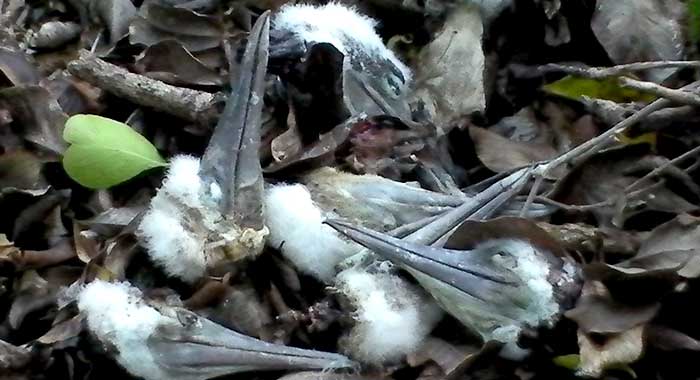 Although seabird harvest and egg collection are prohibited by legislation of both Grenada and St. Vincent and the Grenadines (SVG), research by Environmental Protection in the Caribbean (EPIC) shows that the practice continues to occur, primarily amongst fishing communities and recreationists.

Harvesting often occurs in tandem with other activities, such as goat hunting, fishing and cook-ups on offshore islands, while chicks and eggs are collected and brought back to main islands for distribution amongst family and friends.

Practitioners originate both within the Grenadines and also from St. Vincent and Grenada.

Despite lockdowns and restricted movements during COVID-19 in recent months, EPIC has received increased reports of seabird harvesting during this time.

Although laws prohibit the taking of seabirds, their chicks and eggs, enforcement of these protective laws has been limited due to the difficulty and expense in monitoring the remote islands in the Grenadines.

To address the issue of seabird harvesting in the Grenadines, EPIC is collaborating with authorities, organisations and local communities of both nations to enhance capacity for seabird protection and raise awareness of conservation needs.

EPIC has also developed a network of individuals — especially fisherfolk and tour operators — throughout the Grenadines, trained in seabird monitoring and patrolling of threats at remote islands.

Most seabirds return to the same island each year to nest and raise chicks.

While there are over 80 islands, rocks and cays in the Grenadine island chain between St. Vincent and Grenada, only nine have human settlements, meaning that people do not regularly access most of the islands.

The majority of these islands, therefore, provide ideal nesting habitat for seabirds, of which many populations elsewhere have been displaced by development and disturbance.

Seabird colonies in the Grenadines sometimes number in the thousands and even tens of thousands of individuals.

Some of these colonies host populations of seabirds that are globally and regionally important — meaning that they contain at least 1% of entire global or regional population of a species.

During peak nesting season, the sheer number of seabirds present, combined with the noise from their vocalisations and visible activity, tends to give the illusion that seabird populations are thriving.

However, seabirds have declined by approximately 70% worldwide, with declines in tropical areas thought be more than 90%.

In a regional assessment of seabirds in the Lesser Antilles by EPIC, researchers found that the greatest threat facing seabirds, for both St. Vincent and the Grenadines and Grenada is the continued and extensive harvesting of seabirds, their chicks and eggs — an activity that is infrequently practiced by other Caribbean nations nowadays, and indeed an activity that has diminished worldwide.

Overharvesting of seabirds has historically even been the sole cause of extinctions of entire species of seabirds.

The Great Auk, a flightless seabird that was found in the North Atlantic, is perhaps the best-known example globally.  Great Auks numbered in the millions but were a favoured food of passing sailors, who would fill boats with their harvest.  Today, the Great Auk no longer exists.

Species that are especially targeted in the Grenadines include laughing gulls (Mauve, Davybird), sooty tern (eggbird), and brown and red-footed boobies (booby) for their eggs, while booby species are additionally targeted for their flightless chicks.

Adults of some species, such as the magnificent frigate bird (sizo, man o’war) are occasionally caught on hooks at sea, both accidentally and purposefully, and either killed or kept for consumption as well.

While laughing gulls lay two to four eggs, all other seabirds in the Grenadines raise only one chick per year, which means that an egg or a chick lost to harvesting cannot be replaced until an entire year has passed.

Continuous harvesting reduces populations and prevents them from recovering.

Some individuals go so far as to fill entire buckets with eggs — a practice that is clearly not sustainable.

The presence of people in seabird colonies additionally causes much disturbance, leaving an egg or chick exposed to the hot tropical sun, in which it can perish in a matter of minutes.

Seabirds are amongst the top predators of the ocean — on the same scale as whales and sharks – and toxins in the marine ecosystem, such as mercury, can build up in their bodies.  This can eventually result in poor health and is one of the reasons eating seabirds, their chicks and eggs is highly discouraged.

Despite on-going outreach and education efforts by EPIC, interviews amongst fishing communities on six of the Grenadine islands in 2019 indicated that more than 50% of respondents have harvested seabird chicks and eggs before, with a higher number of respondents indicating that they consume seabird products but are not involved in harvesting — though 60% were not aware that the practice is illegal in both Grenada and SVG.

Since 2009, researchers and volunteers working with EPIC have documented harvesting activities first-hand, noted evidence of previous harvests (e.g. carcasses) and have even been offered seabird eggs for purchase.

In one case, a single individual was found to have harvested almost 40% of the Brown Booby chicks on one island.

One species, the masked booby, no longer nests in the Grenada Grenadines; while only six pairs were found in the most recent survey of St. Vincent’s Grenadines, their decline is likely to have in part been caused by overharvesting.

“In order to ensure that seabirds fly above our waters for generations to come, it is vital that we act now to protect them and their nesting sites,” EPIC said.

For more information, or to become involved as a seabird monitor, please contact Juliana Coffey, Project Coordinator at: [email protected] or on WhatsApp (709) 770-6877.