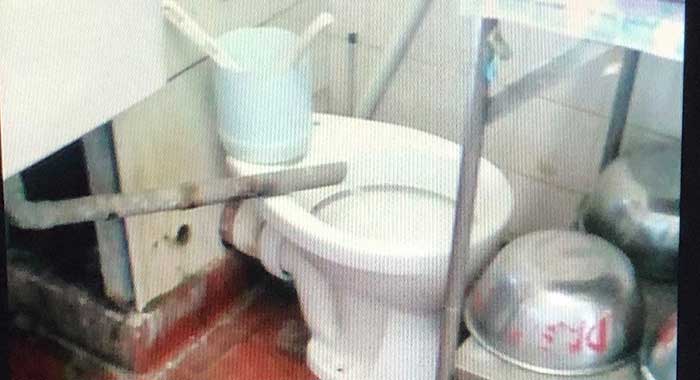 A photo said to have been taken at Milton Cato Memorial Hospital.

Opposition spokesperson on health issues, Daniel Cummings, has decried the physical conditions of the Milton Cato Memorial Hospital, saying that photos circulating on social media recently illustrate what the opposition has been speaking about for years.

Cummings, who is Member of Parliament for West Kingstown, said on NICE Radio on Tuesday instead of addressing the issue, hospital official are trying to identify the staff members who might be involved in taking out the photographs.

“As I often say, it is the most painful thing to do. The so-called government makes a mockery of our health system. Election after election, they come with their grandiose promises.

“Within recent time I am seeing on Facebook that people are going into the hospital and taking out snippets of the obvious problems, which we have been highlighting for a number of years.”
Cummings said anyone with a relative or friend warded at MCMH or who has visited the health care facility would know of “the backwardness, the lack of care, the lack of maintenance.

“Even in some of the wards you have to watch how you walk because the floor is so uneven, you can easily trip. A normal person can easily trip and fall by the gulf made by tiles that are missing or damaged.

“So if it is dangerous for people who are in their full health, you can imagine what it is like for patients at the hospital trying to move about and go to the washroom, if it is functional.”

He said that what happens at the hospital “reflects an absolute lack of care. Nobody treats the people of this country as if we are human beings and we deserve the best…

“You visit some of the wards and you want to know, good heaven, we know things are hard but I am taking basic things like cleaning. Forget about how old the equipment is, as long as it is functioning. But clean it on a regular basis.”

He said that patients should not contract disease when warded at the hospital.

“These are the basic things that we are calling for. But, instead, we find that the energy is going into identifying the nurses and other workers who they feel are the ones who are leaking these photographs and these bits of information.

“Could you imagine that people have to look over their shoulders to publish the conditions that are in our general hospital and they are looking to punish people for letting the world know the unhealthy condition in which the hospital is operating?” Cummings said.

“That is what passes for governance. Instructions going out to try and identify who are the culprits, quote-unquote, who are telling the world of the conditions under which people have to sit and wait, and lie in the Milton Cato Memorial Hospital. I said it before; I’ll say it again: it is easy to understand why Milton Cato didn’t want his name to be associated with this monstrosity.”

One reply on “MP decries conditions at MCMH”