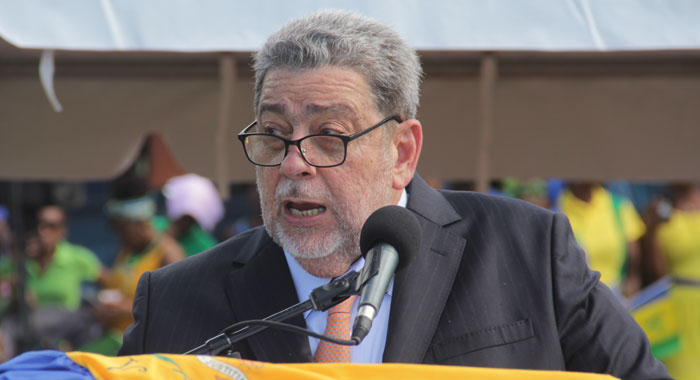 As he took up his six-month stint as chair of CARICOM, Prime Minister Ralph Gonsalves said that the 15-member regional block – which is often maligned as inefficient and irrelevant – is central to the survival of its people.

“The inequalities and harsh encumbrances in the global political economy, the existential threat of climate change to our region, and the explosion of pandemics have made it pellucid, as never before, that our Caribbean Community is central to our people’s salvation on this our Earthly City,” Gonsalves said as he took over the chairmanship from Barbados Prime Minister, Mia Mottley.

He said that in the early days of COVID-19 pandemic, Prime Minister of Trinidad and Tobago Keith Rowley, “perhaps with only a touch of hyperbole, affirmed that ‘CARICOM is the antidote to COVID-19’,” Gonsalves said.

He described as “heroic” the contribution of several CARICOM agencies, including the  Caribbean Public Health Agency (CARPHA), CARICOM Implementing Agency for Crime and Security (IMPACS), and Caribbean Disaster Emergency Management Agency (CDEMA), and the Regional Security System during the COVID-19 pandemic, saying that their work is testimony of his view of CARICOM.

Gonsalves said that immediately on the CARICOM agenda continues to be the challenge of COVID-19 and its four interconnected dimensions of health, the economy, society, and security.

The agenda also includes the coordination of the delivery of a sufficiency of regional air transport in quality, affordability, safety, and sustainability, the prime minister said.

He was speaking less than one week after four CARICOM nations, including his own St. Vincent and the Grenadines, which are the majority shareholder of LIAT, the main regional carrier, decided to liquidate the airline.

Antigua and Barbuda did not attend Friday’s virtual conference even as Prime Minister Gaston Browne has expressed dissatisfaction with his colleague’s handling of the LIAT matter and has said that St. John’s is prepared to lead the way in funding a new LIAT.

The other major LIAT shareholders are Barbados and Dominica.

Gonsalves further said that the CARICOM agenda over the next six months will include the socio-economic recovery of the region; the strengthening of the region’s resilience against multiple vulnerabilities; the building of a better, more equal, more inclusive global order in full recognition of a properly articulated “small state exceptionalism”; and the further upliftment of the Caribbean civilization “in every material particular within our region and in our interface with others in our hemisphere, the developing world, the major economies and global institutions”.

“These large strategic issues, and more, confront us,” the prime minister said, adding, that so, too, are those touching and concerning the internal arrangements of CARICOM itself.

“The policy responses are available and have been well-researched. Like the esteemed Issachar, one of the leaders of the historic 12 tribes of Israel, we must know the times and act accordingly,” he said.

He said CARICOM heads  “must remain calm and patient, knowing always that sun brightens stone; we must not panic or be consumed by excessive fear or hysteria; we ought to stand askance from useless recriminations.

“We know ourselves as a people, and our immense possibilities, despite our limitations. We know that there is much more that we can achieve together without rancour or bitterness, even in the midst of dissonances and contradictions.

“Our people expect us, metaphorically, to make whole sons and whole daughters out of the compromises which history and our extant circumstances have made us.  In this understanding, we come home to ourselves and our people, for their upliftment.

“Let us build further upon our solid accomplishments in this our remarkable region and magnificent Caribbean civilization. It is a great cause; and great causes have never been won by doubtful men and women,” Gonsalves said.